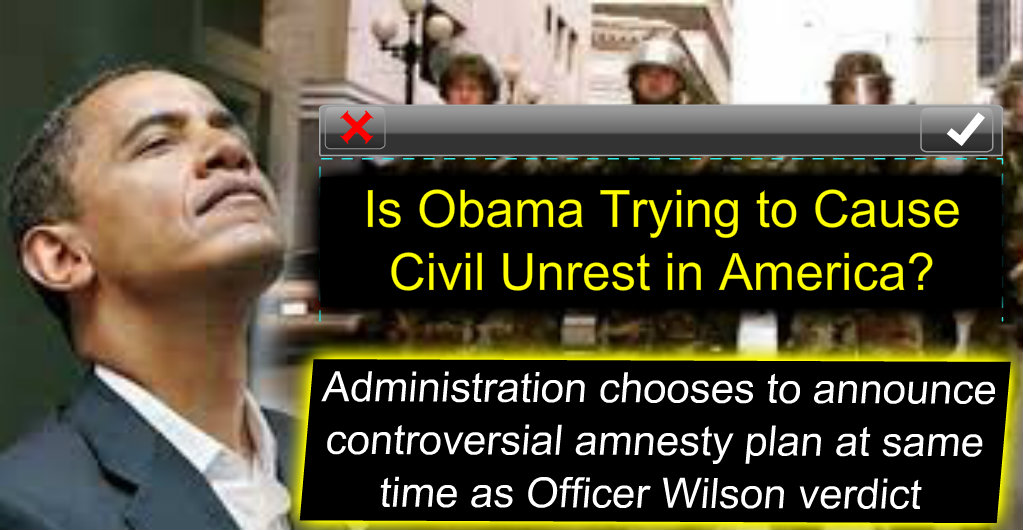 By choosing to announce his extremely controversial executive agenda on amnesty at almost precisely the same time the verdict in the shooting death of Michael Brown is expected to be announced, President Barack Obama risks causing civil unrest in America.

The timing is so senseless that it almost looks like Obama is deliberately trying to stir up domestic disorder.

Police departments across the country are preparing for riots in the aftermath of what many expect to be the acquittal of Officer Darren Wilson, a decision expected to be made within the next 36 hours.

Meanwhile, Oklahoma Sen. Tom Coburn warns that Obama’s plan to legalize as many as 5 million undocumented immigrants, set to be announced tonight, threatens to cause bedlam.

Coburn went on to note that the country needed to be pulled together and not divided further, yet Obama has chosen to coincide his immigration announcement with the culmination of the most divisive domestic issue of the year, and one that already caused weeks of unrest this past summer.

Could the administration not have waited at least a few days to announce the amnesty plan, allowing any potential violence in reaction to the Wilson verdict to subside? Or is Obama deliberately trying to foster division in order to polarize the country as his only means of creating some form of momentum behind the immigration push?

Polls show that America is more deeply divided under Obama than at any time in the past two decades.

Meanwhile, supporters of Officer Darren Wilson have accused Obama of failing to stop the Michael Brown shooting from turning into a race war by offering condolences to Brown’s family while ignoring the plight of Wilson.

Unlike other cases of police brutality, the preponderance of evidence clearly indicates that Wilson did not deliberately gun down Brown in cold blood while the victim had his hands up in the air. Autopsy results and ballistics evidence suggests that Brown attacked Wilson and attempted to grab his gun before the shooting.