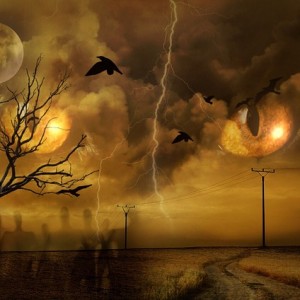 It isn’t just our economy that is crumbling.  Something is happening to America that no amount of money will be able to fix.  Everywhere around us we can see evidence of the social decay that is systematically eating away at the foundations of our society.  It can be found on the streets of our inner cities, in dark basements in extremely rural communities, in the most prestigious boardrooms on Wall Street, and definitely in the halls of power in Washington.   Bringing in an entirely different crop of politicians or printing gigantic mountains of money is not going to solve this problem, because it exists in the hearts of millions of ordinary men and women.  The truth is that we really need to take a good, long look at ourselves in the mirror, because we need to take a 180 degree turn as a nation.  What we are doing now is clearly not working, and the longer that we take to address this problem the worse it is going to get.  The following are 10 examples of the social decay that is eating away at America like cancer.  Individually, they could be dismissed as isolated incidents.  But I could have easily listed 100 examples or 1000 examples.  Every single day, we are inundated with reports like these.  The symptoms of the decay of our society are all around us.  We just have to be willing to look at them…

#1 It seems like many of the most horrific crimes these days are happening in middle America.  For example, a woman was recently hit over the head, raped and set on fire in a park in Wichita Kansas…

Wichita police say a woman was sexually assaulted, hit on the head, and set on fire Monday night in Fairmount Park.

According to police, the woman was on the ground, almost in a crawl, barely moving, and naked.

The woman was helped by a neighbor – Johnnye Marshall woke up her boyfriend Deon McPherson when she heard somebody scream for help.

“What if that was my daughter?  I’d want somebody to go in and get her,” McPherson told The Wichita Eagle.  “Where there wasn’t blood, there was a burn.”

The flames from the fire were about 2 to 4 feet high.  McPherson stayed with the woman until firefighters arrived.

#2 I have repeatedly written about how the United States is the most obese of all the major industrialized nations.  Well, now we are using our extreme obesity to try to hide things that we have stolen…

A 350-pound Wal-mart shopper was arrested yesterday after he was found sitting atop five stolen rib eye steaks in the seat of a motorized scooter that he was riding around the South Carolina store.

Rodney Fowler, 43, was spotted Tuesday afternoon placing the steaks in his scooter by a Walmart loss prevention officer, according to a police report.

“Suspect sat on the steaks and exited the store passing all points of sale, without attempting to pay for said merchandise,” cops noted.

The 5’ 5” Fowler was then confronted by the Walmart worker and escorted back into the store, where he was later arrested by police for shoplifting. “Due to his size, the suspect was cuffed using two pairs of cuffs,” investigators noted.

#3 What would you do if a police officer pulled you over for a traffic stop and exposed his private parts to you when he came up to your vehicle?  Well, this actually has been happening in New Jersey…

A Newton police officer was arrested Monday on accusations that he unzipped his pants and exposed himself to young male drivers during “numerous” traffic stops.

Jason R. Miller, 37, of Hampton Township, a patrolman since 2001, turned himself in at the Sussex County Prosecutor’s Office and has been indefinitely suspended without pay pending the outcome of the criminal case, according to a statement issued by Sussex County Prosecutor Francis Koch and Newton Police Chief Michael Richards.

Miller would expose his genitals to motorists “to satisfy his prurient interests” and then let them leave without issuing traffic summonses, according to a police complaint.

#4 If someone was planning to “accidentally” kill his wealthy wife, you would think that he would be smart enough not to put an “X” on the map where he planned to do it.  But that is apparently precisely what one man in Colorado foolishly did…

A suburban Denver man charged with pushing his wife to her death off a cliff in Colorado’s Rocky Mountain National Park could not explain to investigators why he had a park map with an “X” drawn at the spot where she fell.

But he told friends that he scouted out the park’s steep and craggy terrain at least six times, trying to find the perfect place to take Toni to celebrate their 12th year of marriage.

It also turns out that his first wife died in a “freak accident” too.

#5 It is one thing to kill someone.  It is another thing to hack the dead body up with a saw and cook it.  I don’t know what in the world has happened to the state of Florida, but a lot of really weird stuff has been going on down there lately…

Angela Stoldt told officials she took a hacksaw to her neighbor’s body last year and tried to cook away evidence of James Sheaffer.

One leg went in the oven. Other parts went into pots.

Stoldt’s house in Deltona smelled of burning flesh, but she assured her daughter it was just a rat broiling in the oven, according to details made public last week after a grand jury charged her with first-degree murder.

The 42-year-old Deltona woman is accused of killing Sheaffer, 36, a limousine driver, in April 2013.

#6 In recent years, it seems like there has been a constant stream of news stories about twisted men locking up women in their basements and forcing them to be sex slaves.  The latest example comes from Cincinnati…

A man pleaded guilty Friday to locking multiple women in his Cincinnati home and forcing them into prostitution.

Christopher Hisle, 45, was arrested on April 8, 2014, in Louisville, Kentucky after authorities said he drove a young woman from Cincinnati to Louisville to engage in prostitution at a nearby Red Roof Inn.

An FBI investigation later revealed Hisle was involved in forcing and compelling the women to engage in commercial sex for at least two years. He held the women at his Avondale home at 908 Lexington Ave., documents state .

It is unknown how many women Hisle held at one time and what their ages were. Authorities said at least 12 women are victims of his human trafficking operation.

#7 Why would a grown woman want to have sex with a 10-year-old boy?  You would have to be incredibly sick to try to do such a thing, but that is reportedly what one 25-year-old babysitter in Connecticut is charged with doing.  In fact, she is accused of doing this multiple times…

A babysitter has been accused of repeatedly having sex with her friend’s 10-year-old son while she was looking after him and his other siblings.

Marybeth Rataic is facing 10 felony charges after allegedly having sex three times with the boy at his home in Meriden, Connecticut.

Police say that in one instance, the 25-year-old from Willimantic, had sex with the boy while his siblings slept in the room after creeping into the child’s room, which he shared with his brothers.

She is also accused of having sex with the 10-year-old while his mother was giving birth in hospital.

#8  A minor scuffle between two girls at a California high school erupted into a melee when a 400 pound police officer slammed his fist into the face of one of the girls.   Other students began to swarm the officer, and at that point things got wildly out of control…

However, Ernest Righetti High School students say the initial fight was relatively minor, and that it was a Sheriff’s deputy striking one of the girls involved in the brawl that sparked the mass violence on campus.

That shocking moment was filmed by a bystander and has since been posted online by the Santa Maria Times.

The video shows the officer trying to break up a fight between two girls, only to hit one of the young women and drag her away. Students watching the altercation appear outraged by the act, and start to swarm the officer.

#9 When I was growing up, it seemed like almost everyone watched the Cosby Show on Thursday night.  Bill Cosby was “America’s Dad”, and he was universally respected.  Well, it turns out that now he is being accused of rape by 15 different women.  How is it possible that such horrific crimes could be covered up for so long, and what does that say about our society?  The following comes from Time Magazine…

In Cosby’s story we find accusations of women being silenced for decades by threats, lawyers, fear and a generally defensive public, who until now were uninterested in being awakened from sweet dreams of their TV father.

This should not be viewed as the mature response of a well respected, integrity filled man (and in the case of his wife, a beloved, regal woman) attempting to maintain dignity and stay above the fray. It should be seen as what it is: A power move by a someone so arrogant that he thinks he shouldn’t even be asked about the fact that 15 women are accusing him of a horrific crime.

#10 As I have written about previously, the violence that we have seen in Ferguson, Missouri this year is a perfect example of how the streets of America can descend into chaos.  And now the upcoming grand jury decision threatens to rekindle that violence.

Instead of sober deliberation about this case and sincere attempts at peaceful reconciliation, both sides are preparing for mass civil unrest.  If the grand jury reaches “the wrong decision” we could see even more rioting, looting, violence and police brutality than we saw the first time around.

And this time, it may not be limited to Ferguson.  As the Daily Sheeple has pointed out, protest organizers have put up a Tumblr page for something called “The Ferguson National Response Network“.  According to that page,  “planned responses” are being organized in 82 cities throughout the United States.  In addition, protest organizers have released a list of 19 “Proposed Rules of Engagement” for confrontations with law enforcement authorities.  Needless to say, all of this sounds quite ominous.  The following are the 82 cities where “planned responses” are currently being organized…

Police in Ferguson are warning citizens that they better buy guns because they “will not be able to protect you or your family“.  And
CNN is reporting that gun sales in Ferguson are indeed surging.

Hopefully this grand jury decision will come and go and peace will prevail in Ferguson and elsewhere.

But without a doubt, the thin veneer of civilization that we all take for granted on a daily basis is disappearing.

The foundations of our society are steadily rotting and decaying, and our underlying problems are getting worse with each passing day.

How long will our nation be able to remain stable if this continues?

Biden’s ‘Day of Prayer’ Remarks Never Mentioned God, But It DID Talk of ‘Racial Justice’ and ‘Climate Change’
May 8th, 2021 Flag And Cross

Can experimental mRNA vaccines act as bio-weapons and transmit coronavirus spike proteins to the unvaccinated?
May 8th, 2021 DC Clothesline