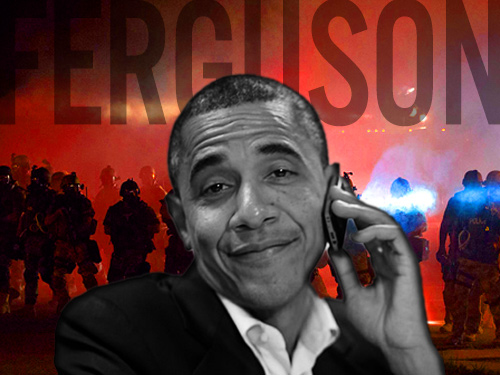 Whatever is about to go down when the grand jury announces its decision in the Darren Wilson/Michael Brown case, rest assured America, our president is on it.

In fact, according to Missouri Senator Claire McCaskill who spoke to Obama about Ferguson on Tuesday, the president has taken time out of his busy schedule to make sure and personally contact major civil rights groups all across America regarding Ferguson.

McCaskill says the president has touched base with major civil rights groups across the country, discussing the challenges raised by the incidents in Ferguson.

Hm. Considering protests have been expertly planned, organized and trained for in 82 cities across the U.S. and one in Canada following the grand jury announcement, this is surely just a coincidence, right?

What exactly does that even mean? The federal government has already been intimately involved in Ferguson. AG Eric Holder ordered not one, but two federal autopsies for Michael Brown (for a total of three autopsies) and sent the same team to Ferguson that inflamed the Trayvon Martin case.

What exactly has to happen for it to be “appropriate” enough for the president to become even “more involved” in Ferguson? What is about to go down?

Missouri’s governor already declared a 30-day state of emergency and called out the national guard.

The president announced executive amnesty last night (which is apparently was not televised on any of the three main TV networks) and the mainstream media is floating the idea that the grand jury is set to ever so timely come back with the Ferguson decision on Friday.

In the meantime, police are already arresting protesters in Ferguson, and the grand jury hasn’t even come back yet.

Good to know the president has been touching base with major civil rights groups across the country in the lead up to whatever is about to go down in (and because of) Ferguson.

Preemptive Martial Law in Missouri? State of Emergency Declared…and the Decision Has Not Even Been Read