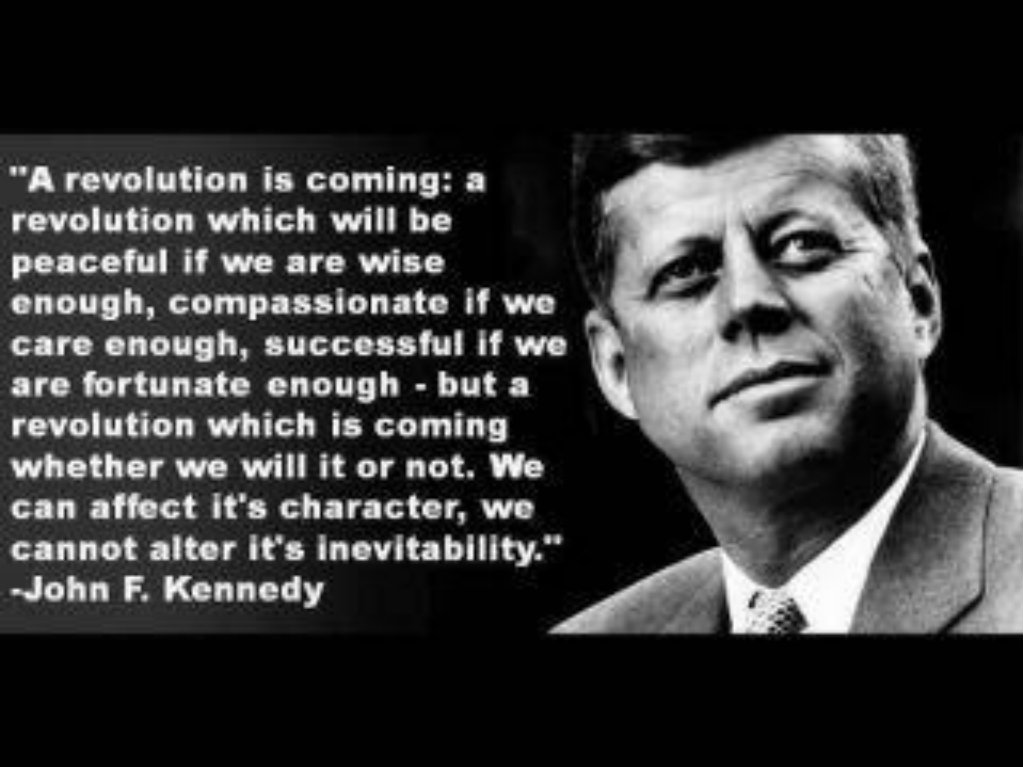 JFK was not a perfect man by any means. In fact, he was an enigma, because as flawed as was his personal life, his Presidency was filled with unparalleled courage, the kind of courage that we all wish we had in our current President. During his 1,000 days in office, JFK managed to acquire the largest and the most powerful list of enemies acquired by any sitting President. The President’ father, Joe Kennedy, a former ambassador to England and mafia bootlegger, used his Mafia connections to steal the 1960 election in Cook County, IL., which ensured that JFK would carry Illinois. This ultimately was the deciding factor in the 1960 Presidential election. Yet, JFK’s administration declared war on the Mafia with Robert Kennedy as the Attorney General leading the way.

JFK also managed to anger the oil industry as he was cutting the oil depletion allowance. He further infuriated the military industrial complex over his refusal to support the Bay of Pigs invasion. JFK had every intention to bring home the combat advisors which meant no involvement in Vietnam and his intention to engage Russia in talks of nuclear arms control did not sit well with the manufacturers of the weapons of mass destruction. In his greatest act of defiance towards the globalists of his day, JFK was slowly but surely eroding the Federal Reserve domination over our nation’s monetary supply with the issuance of C-notes.

Any police detective worth his/her salt would have followed the money and sought to look for the perpetrators among those who would have gained financially from JFK’s death.

Every November, I do a number of radio interviews and in-person presentations in which I reveal who fired the fatal shot from the grassy knoll. I present photographic evidence (i.e. newly enhanced “Badge man” photo), the recorded eye witness testimony of Lee Bowers, Gordon Arnold and Ed Hoffman. I also present the video testimony of the man who gave that particular assassin the contract to kill JFK (i.e. Christian David) and the paymaster (i.e. Michele Nicoli). All roads lead to Lucian Sarti as the shooter on the grassy knoll.

Vice President, Lyndon Johnson, was a co-conspirator after the fact. He blocked any crime scene investigation of the President’s limousine by having the interior and the exterior stripped without being examined as a crime scene. The bullet fragments contained in the limo could have proven that Oswald was not the shooter. This is called obstruction of justice and LBJ should have gone to prison. We also have LBJ presidential tapes in which it is heard that LBJ and FBI Director, J. Edgar Hoover conspire to appoint a “phony” commission to sanction their story that Oswald acted alone. However, knowing who did the shooting and who did the covering up, does not provide one with the answers as to why JFK was killed and who was ultimately behind the assassination.

If the money trail was followed by investigators in 1964, it would have revealed that the military industrial complex (e.g. Chrysler, Bell Helicopter), the Federal Reserve and the oil industry all made significant profits in the year following JFK’s death through the complete reversal of his policies on Vietnam, the nuclear arms race and his relationship with the oil industry. The central theme running through these entities was David Rockefeller who is presently 99 years old and is still wreaking havoc upon the American people. Had I been an investigator, in 1964, he would have been my primary person of interest.

Signing His Own Death Warrant

The plot to kill JFK had its origins in two speeches the President made. The first speech was made 10 days following the failed Bay of Pigs invasion, and 10 days after a defiant JFK said “no” to the CIA, the Joint Chiefs, the Mafia and the Cuban refugees, by refusing to provide air cover for the invasion of Cuba by CIA trained Cuba refugees, JFK made the speech that put one of the final nails in his coffin.

The JFK speech is now known as his famous “Secret Society” speech. JFK was the first and the only President to ever identify the globalists as the enemy of America and humanity as a whole. For a man in his position, JFK was stunningly detailed in calling out the globalists of his day.

Calling Out the New World Order in 1961

1. Media censorship: “I have no intention of establishing a new Office of War Information to govern the flow of news. I am not suggesting any new forms of censorship or any new types of security classifications”.

2. The growing dominance of the globalists: “The very word “secrecy” is repugnant in a free and open society; and we are as a people inherently and historically opposed to secret societies, to secret oaths and to secret proceedings. We decided long ago that the dangers of excessive and unwarranted concealment of pertinent facts far outweighed the dangers which are cited to justify it. …Our way of life is under attack. Those who make themselves our enemy are advancing around the globe. The survival of our friends is in danger. And yet no war has been declared, no borders have been crossed by marching troops, no missiles have been fired”.

3. Identifying the globalists– “For we are opposed around the world by a monolithic and ruthless conspiracy that relies primarily on covert means for expanding its sphere of influence–on infiltration instead of invasion, on subversion instead of elections, on intimidation instead of free choice, on guerrillas by night instead of armies by day. It is a system which has conscripted vast human and material resources into the building of a tightly knit, highly efficient machine that combines military, diplomatic, intelligence, economic, scientific and political operations”.

In 1961, these were fighting words because the public had never heard of such things. In the two weeks following the Bay of Pigs fiasco, the globalists knew they had an enemy in the White House and if he could not be unelected, he would have to be dealt with.

If you have never listened to the speech, you should take the time to listen, now, for if you do, the events of today’s America will make a great deal more sense. The text of the speech is provided below the audio recording.

In tomorrow’s companion piece, the second speech, the one that put the final nail in JFK’s coffin. Any guesses as to what speech that I am referring to?

This Sunday evening, from 9pm to Midnight, my show explores the events connected to JFK’s assassination as well the  current implications arising from this horrific 1963 event. Listening details are located below the text of the speech.

Click here for the full text of the “Secret Societies” speech and more details about Dave’s special Sunday Night Show.