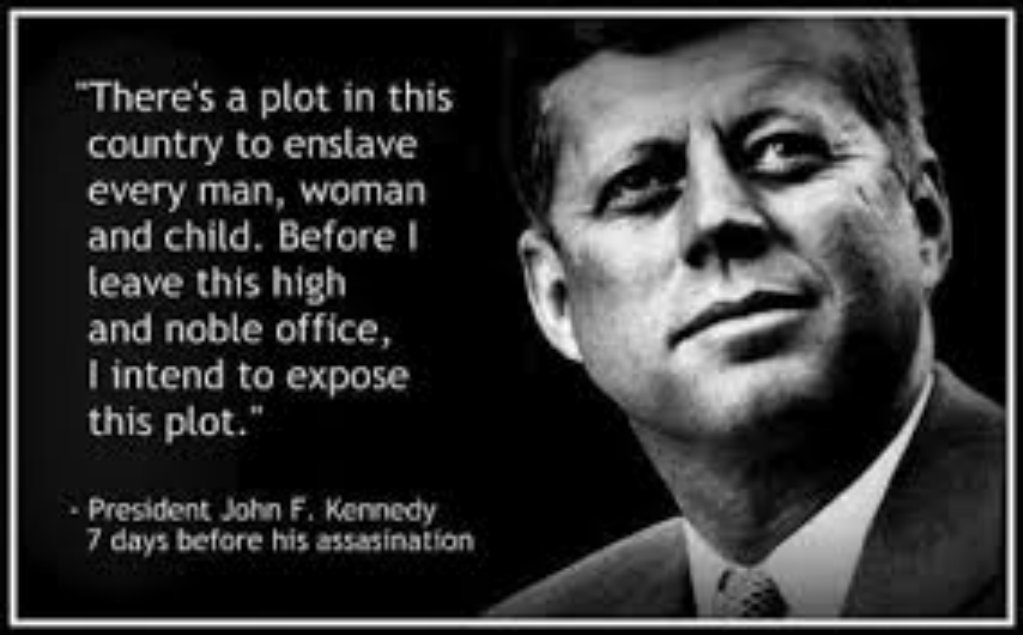 Peace is impractical. War is inevitable. That is what the globalists and their puppet media would have have mankind believe. The problems that are created by war are man-made and therefore, can be solved by man. However, our right to self-determination and peace have been robbed from us by people like David Rockefeller.

When war becomes the number one business venture of the globalists, they obfuscate the benefits of peace and prevent the directing a nation’s assets towards the betterment of its people. Rockefeller, Rothschild et al, hold humanity in such disdain that they seek to make money on the forced decline of mankind. For in their eyes, mankind cannot be allowed to prosper and grow, man must be subjugated and turned into cannon fodder in the next bankster-created war.

One President saw things as they were and sought to shift the focus of the nation towards peace. That President had such dangerous ideas in the eyes of the elite. President John F. Kennedy was a visionary. He sought to remove the stranglehold that the banksters had on our government by reducing the oil depletion allowance, printing C-notes to slowly erode the Federal Reserve, enact a foreign policy to keep the U.S. out of Vietnam and above all else, he sought to reduce the threat posed by the previously unrestrained growth of nuclear weapons.

In June of 1963, JFK called out the elitist war mongers in his famous American University speech. Unfortunately, JFK’s enlightened attitude was a threat to the prevailing establishment and he paid for his idealism with his life five months after delivering the American University Commencement speech.

We have have never seen the a President championing the virtues of peace and the elevation of the concern for the common man. We will not likely ever see this kind of leadership again. The following excerpts of JFK’s American University speech show us what could have been and why the elite could not handle four more years of a JFK Presidency. For if JFK had lived, the following ideals would have formed the goals of an energized nation.

Here are the words of a young, idealistic President as spoken at American University in June of 1963:

“…So, let us not be blind to our differences–but let us also direct attention to our common interests and to the means by which those differences can be resolved. And if we cannot end now our differences, at least we can help make the world safe for diversity. For, in the final analysis, our most basic common link is that we all inhabit this small planet. We all breathe the same air. We all cherish our children’s future. And we are all mortal…

…First: Chairman Khrushchev, Prime Minister Macmillan, and I have agreed that high-level discussions will shortly begin in Moscow looking toward early agreement on a comprehensive test ban treaty. Our hopes must be tempered with the caution of history–but with our hopes go the hopes of all mankind…

When JFK entered the White House, his party ways came with him, but there would soon be a series of events that would make John Kennedy a changed man. In 1961, the CIA and director Dulles circumvented JFK by launching a secret invasion of Cuba in the Bay of Pigs fiasco. It was only at the last moment did JFK discover the unfolding events in which he refused to provide air cover and the invasion failed on the beach. Kennedy fired Dulles and threatened to break the CIA into a thousand pieces. This even marked the beginning of the bifurcation between JFK and the elite because the CIA had become their errand boy. The elite and their mafia partners desperately wanted Cuba back under their control and JFK blocked their ambitions. The following year, as a result of the Cuban Missile Crisis, JFK had another chance to redeem himself in the eyes of the elite and again he failed. It did not matter that JFK had averted WWIII, he failed to put boots on the ground in Cuba and again, the elite and their designs for Cuba were thwarted. Simultaneous to the events in Cuba, JFK was dragging his feet on Vietnam. He was reluctantly continuing on the path of allowing combat advisers to continue to operate in South Vietnam.

Vietnam was potentially a huge cash cow to the establishment elite. Chrysler Corporation received 90% of all US defense contracts in 1963, mostly in a middleman capacity. Bell Helicopter and Chase Manhattan Bank would reap record profits from the Vietnam War. Unfortunately for the elite, JFK was growing more isolationist. He became a changed man following the Cuban Missile Crisis as this event shook him to his core. He feared putting the US in military situations that could result in another confrontation with the Soviets. In 1963, JFK had announced that he was bringing home all combat advisers in 1965. JFK and South Vietnamese President, Diem, agreed that America would never send ground troops to Vietnam. Diem and his brother were assassinated by the CIA and 21 days later, JFK was dead. Nine months following these assassinations, America sent 100,000 ground troops to South Vietnam following the now discredited, false flag event known as the Gulf of Tonkin incident and the elite bathed in their blood money.

JFK had been so shaken by the real possibility of WWIII, that he and the Soviet Premier were actually having discussions regarding the capping of nuclear arms production. The elite could not have any part of  this unprofitable course of action. There is no money to be made in peace especially if you are Martin Marietta (today known as Martin Lockheed). The establishment elite wanted to continue down the path arming America’s nuclear arsenal to the teeth. JFK had become a major impediment to profits in this regard.

JFK, no doubt motivated by the fear of WWIII, was blocking Vietnam and was going to kill the cash cow of nuclear arms production. No doubt, JFK saw the establishment elite as the enemy of humanity. They were willing to take the country to war so that they could fatten their wallets.

JFK began to take action against the elite. He was taking away half of their unwarranted oil depletion allowance. JFK stuck a big stick in the eye of the Federal Reserve by printing over $4 billion dollars of silver backed money, thus threatening the stranglehold the Federal Reserve had enjoyed over the country for the past 50 years.

JFK began making speeches, very damning speeches, in which he called out the establishment elite and their “secret societies” and then JFK signed his death warrant with his American University speech in which he announced, among other things, a desire to pursue peace with the Soviets. Once again, there is no money in peace.

On behalf of “the greater good”, JFK had to be eliminated and he was. However, I have often wondered if JFK had survived, how would America have been changed.

If JFK Had Lived 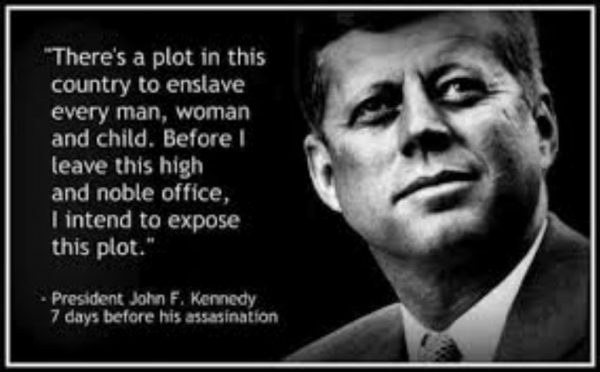 If JFK had lived, so too, would have 58,000 Americans and untold millions of Vietnamese. If JFK had lived, we would not have spent two trillion dollars on nuclear arms. The money could have been spent, as JFK suggested, on education. America might not have become the hopelessly dumbed down nation that it has become. If JFK had lived the Federal Reserve would have eventually gone the way of the two previous central banks in the United States. The US Congress would have retaken the constitutional power of coining money, interest free money. America would have remained solvent.

If JFK had lived, he would have continued to confront the oil companies and today, we might have achieved energy independence and could be paying about a buck for a gallon for gas. Alaska would be the new Middle East and the petrodollar, which threatens to plunge us into a world war over Syria and Iran, would no longer be a problem. The world would be coming to the US for its energy needs and our economy would be booming.

If JFK had lived, the people would have had their true representative in the White House. The events in Cuba so changed John Kennedy, that he became a true Ron Paul in the last two years of his life. It was the last time, that anyone, outside the elite establishment, had anyone in top level government that cared for them.

The day that John Kennedy died, November 22, 1963, was the beginning of the end for America. These same forces, the interlocking directorates of the military industrial complex, the Federal Reserve, the major oil companies and the media that they control, continued to suck the life out of America to the point of where we stand today, a shell of our former country. If in the last year of JFK’s presidency, he hadn’t offered such hope to the American people and to the future of the country, I would have lost interest in the life of JFK and his subsequent assassination a long time ago.

Last year, I falsely held out the hope that the 50th Anniversary of his death would rekindle a curiosity about who killed JFK and why and then subsequently link that knowledge into today’s America. This could have been the impetus for change in America. Alas, the elite controlled the narrative this fall with plethora of documentaries which lead away from the truth that there was a conspiracy to kill JFK. As a result, the country’s interest will continue to wane and with it, the belief that JFK was killed as a result of a conspiracy.

In 1993, 80% of the country believed that JFK was killed as the result of a conspiracy. With the rash of media propaganda, that number has been reduced to 61%. The elite have weathered the storm and continue unabated on their journey towards sucking the life out of this country. They will continue to do so until there is nothing left and we are thrown onto the junk pile of history.

There is no 51st anniversary recognition as the JFK researchers have approached their twilight. Soon the JFK assassination will carry the same weight as the assassination of McKinley. Who? That’s my point. The King is dead, long live the King. On November 23rd, as we turn our collective eyes back on our future, we might want to begin to prepare for adaptation for there will be no great awakening because your future and your very lives are being threatened by forces that John Kennedy foresaw over 50 years ago and that day in June of 1963, when JFK called for peace with the Soviet Union, he signed his own death warrant and David Rockefeller and his bankster cronies reaped unprecedented amounts of profits as they were richly rewarded for their murderous ways. The JFK assassination was the pivotal event in the post-World War II era.  It is the event where modern America lost her soul and any remaining semblance of her moral compass.

Shelby Busch Co-Founder of We the People AZ Alliance on Arizona Today With Lyle Rapacki
May 15th, 2021 TCP News

Prime Minister Benjamin Netanyahu: From Criminal To Hero – Anyone Paying Attention To This Globalist?
May 15th, 2021 Sons of Liberty Media