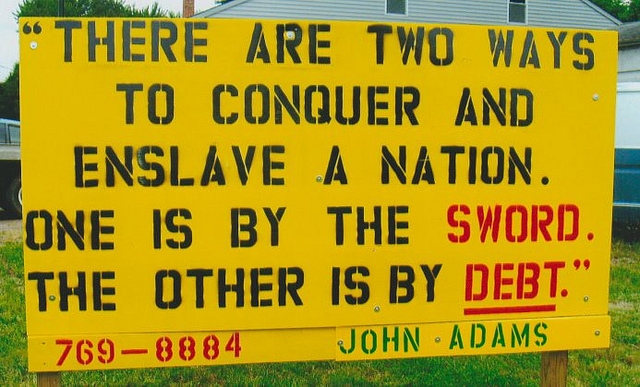 The purpose of war, according to this brief documentary by radio host Michael Rivero, is to force central banks on countries that try to issue their own money. He makes a compelling argument, illustrated by numerous historical examples. The film’s main value, in my view, is in dispelling common misconceptions about where money comes from. Contrary to popular belief, western democracies don’t issue the money they use to run government services. They borrow the money at interest from privately owned central banks. In the US, this private central bank is called the Federal Reserve.

Rivero begins by quoting Benjamin Franklin, who saw George III’s Currency Act as the main trigger for the American Revolution. The Currency Act prohibited colonists from using colony-issued currency. Instead they were required to use English bank notes. The latter were borrowed at interest from the England’s private central bank, the Bank of England. This interest payment amounted to a de facto tax on each and every financial transaction.

After the Revolution, the new American government returned to issuing its own currency. This ended in 1791, when Alexander Hamilton persuaded Congress to appoint a private central bank to finance government services. The First Bank of the United States was funded (at interest) by the Bank of England, which was controlled by Nathan Mayer Rothschild.

Plagued by inefficiency and corruption, the First Bank of the United States was so unpopular that Congress ignored Rothschild’s threats and refused to renew its charter in 1811. Rothschild, whose control over British money enabled him to control both the economy and Parliament, had warned that Britain would declare war to re-colonize the US unless Congress renewed the charter. Although the US won the War of 1812, they were forced to charter the Second Bank of the United State in 1816 to repay their massive war debt. American’s second central bank lasted until 1832, when voters returned Andrew Jackson to a second term based on a campaign promise to shut it down.

From 1832-1862, the so-called “free banking era,” all banks were state charted. In 1862 Lincoln created a national system of banks to fund the federal government and issue currency. When he authorized the US Treasury to issue $150 million in interest-free “greenbacks,” the London Times called for the destruction of the US because of the major threat this posed to the global economy (i.e. international bankers). To punish Lincoln, England and (and France) would provide financial and material support to the southern Confederacy.

Government-issued currency ended for good in when the Wall Street banks conspired with Woodrow Wilson to create a permanent (private) central bank. The Federal Reserve Act was  written in secret by the US banking establishment and rammed through Congress during the 1913 Christmas recess.

World War I and II

According to Rivero, World War I was also a banker’s war, intended to punish Germany for the strict limitations it imposed on its central bank. At the end of World War I, the Treaty of Versailles forced Germany to repay all the war debts of the other European countries, even though Germany hadn’t started the war.

Crushed by this war debt, the only way Hitler could salvage the German economy was to abolish Germany’s central bank and return to interest-free government-issued currency. This move, which infuriated international bankers, resulted in rapid Germany re-industrialization when the rest of the developed world was mired in deep economic depression. It was lauded internationally as the “German miracle.”

Meanwhile in 1933, American bankers and industrialists plotted a “Bankers’ Putsch,” an attempted military coup against Roosevelt. Their goal was to install corporate fascism in the US, along the lines of Mussolini’s government in Italy. General Smedley Butler, the war hero they enlisted to lead the coup, foiled it by exposing it to the House McCormick-Dirkson Committee. The largely pro-business committee instituted a cover-up, until journalist John Spivac uncovered their secret report in 1967.

In 1946, following World War II, forty-four nations signed an agreement at Breton Woods New Hampshire for the US dollar to replace the British pound as the world’s reserve currency. This was done with two stipulations: 1) that the US dollar would be redeemable for gold at a price of $35 an ounce and 2) that the Federal Reserve wouldn’t issue more dollars than they could redeem in gold.

Because the Federal Reserve is a private banking network, the federal government has no control whatsoever over the quantity of US dollars they issue. In 1971, it became obvious that the Fed was issuing far more dollars than it could redeem (the vast majority of money the Fed creates is electronic money – only about 3% is in notes and coins*). When France asked to redeem its dollar reserves for gold, Nixon unilaterally suspended the gold standard agreed at Breton Woods.

The Birth of the Petrodollar

At this point the US dollar became a “fiat” currency, theoretically backed by nothing. In reality, it was backed by oil, through a complex agreement whereby the US agreed to “defend” countries (i.e. not destabilize or declare war on them) if they committed to buying and selling oil in dollars, aka “petrodollars.”

According to Rivero, the US invasion against a long list of Muslim countries is an indirect result of this agreement. Islam prohibits lending money at interest. As Rivero points out, none of seven Muslim countries retired General Wesley Clark has identified as targets for US military aggression (Iraq, Iran, Syria, Libya, Sudan, Somalia, Lebanon) had private central banks prior to US invasion and occupation.**

Apart from several minor historical inaccuracies (eg the purpose of Executive Order 11110 that John Kennedy signed in 1961 and Nixon’s alleged pledge of the National Park system as security on US debt), the film serves as an excellent introduction to the hidden role played by private banks in issuing and controlling the global money supply.

*See 97% owned
**Retired General Wesley Clark first revealed the existence of this campaign to conquer the Middle East and North Africa during a Democracy Now interview in 2007.