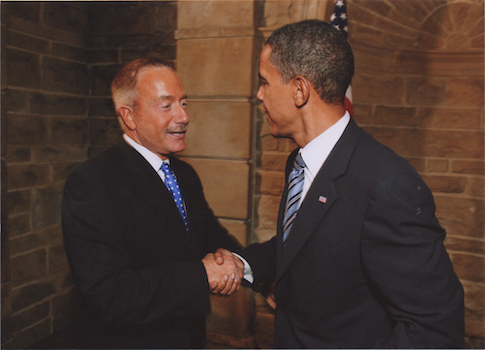 None of it matters: Neither common sense, nor an abundance of victim testimony, peer-reviewed studies, nor their own loathsome admissions and actions. Nothing will move secular-“progressives” to acknowledge the undeniable interplay between homosexuality and childhood sexual abuse.

You listening, Boy Scouts of America?

So here we go again. Yet another high-profile “gay” activist has been arrested for homosexual assault on a child. This time authorities bagged a big fish (a rainbow trout?) in boy-loving real estate mogul Terrence Patrick Bean. Bean co-founded the Human Rights Campaign (HRC), which is one of the world’s largest, wealthiest and most powerful anti-Christian, pro-homosexual organizations. Bean is also a major bundler for the DNC and BFFs with Barack and Michelle Obama. He helped found HRC for the sole purpose of pushing the extremist homosexual political agenda. While, not surprisingly, HRC rushed to scrub its website of any reference to his existence, even now Bean remains on this extremist group’s board of directors.

As reported in the Oregonian and a handful of other publications (don’t expect widespread media coverage on this), 66-year-old Terry Bean and his 25-year-old twinkie boy toy, Kiah Loy Lawson, have been arrested and charged with felonies for allegedly sodomizing a 15-year-old boy.

“Bean has been one of the state’s biggest Democratic donors and an influential figure in gay rights circles in the state,” reports the Oregonian. “He helped found two major national political groups, the Human Rights Campaign and the Gay and Lesbian Victory Fund, and has been a major contributor for several Democratic presidential candidates, including Barack Obama. He’s also a close friend of former Gov. Barbara Roberts.”

While speaking at a recent HRC event, President Obama noted his close friendship with Bean: “To my great friend and supporter, Terry Bean, co-founder of HRC,” he gushed.

Just two years ago, 68-year-old Larry Brinkin, another high-profile and similarly respected (at least among Democrats) homosexual activist, was arrested in San Francisco for possessing and distributing reams of child pornography.

CNS News reported at the time:

“Police said that Brinkin, a former city employee, apparently had photos of children, as young as 1 or 2 years old, performing sexual acts and being sodomized by adult men. …”

“Concerning Brinkin, Theresa Sparks, director of the Human Rights Commission, told the Huffington Post, ‘It’s almost incredulous, there’s no way I could believe such a thing.’

“‘He’s always been one of my heroes, and he’s the epitome of human rights activist,’ she said. ‘This is [the] man who coined phrases we use in our daily language. I support Larry 100 percent; hopefully it will all come out in the investigation.'”

Brinkin pleaded guilty to all charges.

Yep – these monsters are “heroes” to both the HRC and the larger “gay” activist community.

The cases of Bean and Brinkin follow a long-established pattern as old as the ancient Greek bathhouse. It’s not just homosexual priestly predators on the prowl in the Catholic Church. From pedophile “LGBT” hero Harvey Milk, to high-profile “gay activists” like Duke University’s Frank Lombard and USC’s Walter Lee Williams, the homosexual lust for young flesh seems insatiable.

Of course, not every “gay” man, self-identified or otherwise, is a pedophile, but studies indicate demonstrably that homosexual assaults against boys occur at an alarmingly disproportionate rate when compared to heterosexual assaults. The very act of a man molesting a boy unquestionably involves both same-sex attraction and homosexual behavior (a “gay” by any other name …).

But don’t repeat these facts out loud or you might find yourself on the hard-left Southern Poverty Law Center’s (SPLC) “hate group” smear list.

This homosexual abuse creates, at least in significant measure, a vicious cycle of abuse that has helped to populate the larger “LGBT” community. Again, the peer-reviewed research bears out this tragic reality.

Researchers from the Centers for Disease Control and Prevention (CDC), for instance, found that “gay” men are “at least three times more likely to report CSA (childhood sexual abuse).”

Though citing these studies snaps “progressive” heads like Pop Rocks, the connection between homosexual abuse and “gay identity” is irrefutable. Perhaps this is why groups like Bean’s HRC have worked so hard to ban therapy for minors who, as a result of being homosexually assaulted by “gay” men, begin to experience unwanted same-sex attraction and want to take necessary measures to diminish or heal these disordered impulses.

“How many more children will have to be molested before America realizes the damage being inflicted by HRC and other gay activists,” asks former homosexual Christopher Doyle, president of the ex-gay rights group Voice of the Voiceless. “Instead of trying to keep sexually abused and confused children out of the counseling office, HRC and their allies need to take a hard look in the mirror at their tactics to secure ‘equality’ and stop using innocent, sexually confused children as pawns in their political agenda.”

“It is outrageous and tragic that the founder of the largest gay activist organization in the world is molesting boys, while at the same time their leadership is pushing for laws across the United States to keep those same boys out of the counseling office to heal trauma at the hands of homosexual pedophiles.”

What say you, HRC?

Matt Barber is founder and editor-in chief of BarbWire.com. He is an author, columnist, cultural analyst and an attorney concentrating in constitutional law. Having retired as an undefeated heavyweight professional boxer, Matt has taken his fight from the ring to the culture war. (Follow Matt on Twitter: @jmattbarber).