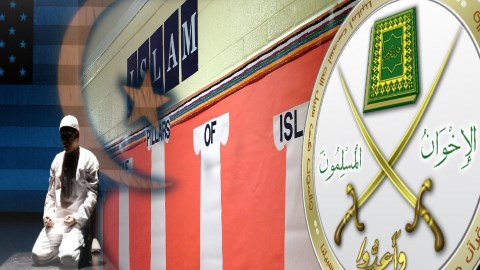 Brigitte Gabriel spoke earlier this year at First Conservative Baptist Church and informed the people there that the Muslim Brotherhood is in the process of infiltrating American public schools, just as they have the United States federal government.

Gabriel, author of two New York Times Best Sellers, Because They Hate and They Must Be Stopped, and founder of Act for America, said that she is passionate about the subject because it has affected her life. Ms. Gabriel is an immigrant, who came to America after her home country of Lebanon (which was the only majority Christian country in the Middle East) was lost to fundamentalist Islam during the Lebanese Civil War.

In the few minutes that she speaks in the video, Gabriel provides the evidence that the Muslim Brotherhood has infiltrated America’s school. She also warns that they will stop at nothing short of total domination of all non-Muslim countries.

Though we have been told that the attacks by Al-Qaeda were spawned due to America’s interference in the Middle East and it partnering with Israel, one must understand that Israel was not around in 1928. Yet, according to Brigitte Gabriel, the Muslim Brotherhood was established to begin the new Islamic Caliphate. As part of that goal (referred to in counter terrorist circles as “The Project”), the Muslim Brotherhood has infiltrated the United States in order to neuter it on the world stage and ultimately to destroy it. This is right in line with the aspirations of one Barack Hussein Obama as well.

Gabriel went on to talk about the “behind the scenes” efforts by the Muslim Brotherhood to maintain an appearance of “moderation” with the goal of destroying Western society and establishing the Islamic State in America. This includes, but isn’t limited to: Using our liberties against us, using “buzzwords,” establishing non-profit and human rights organizations.

In referencing the Muslim Brotherhood’s goals for America, Gabriel read the section of their goals regarding settlement, which came from the Holy Land Foundation trial.

According to the document, Muslims must see their efforts in America as a “grand jihad in eliminating and destroying the Western civilization from within and sabotaging its miserable house by their hands and the hands of the believers so that it is eliminated and Allah’s religion is made victorious over all other religions.”

She then picks up the issue of education and how it is used to advance the Muslim Brotherhood’s goals. Among those goals of education, a Virginia-based Turkish Islamist‘s charter schools are at the top of the list in the Islamic infiltration of America. For a full explanation, pickup at the 11:20 mark in the video.