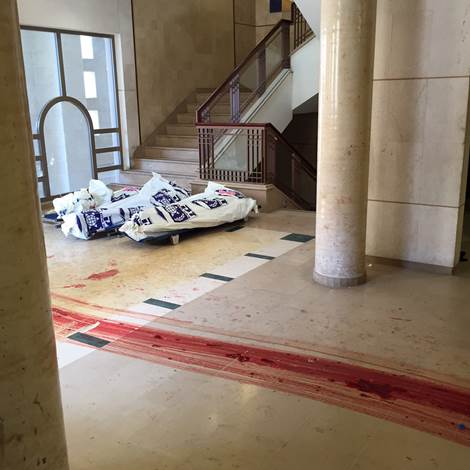 For those who may have missed the story, last week two Arab Palestinians attacked a synagogue in Jerusalem. Axes have been reported as a weapon of choice in an attack that killed four innocent worshippers, three of which were American citizens.

Hacked to pieces as they tried to pray in peace.

Most would call that terrorism.

Not to be outdone by “Terror-TV”, Barack Hussein Obama, took this tragedy as an opportunity to point out that “too many Palestinians have died.” Of course, a former CIA employee freely admits that Obama is a radical islamic enemy of America, so we might expect that from him.

But what about Al Jazeera? Aren’t they reliable?

There are a few of us in the alternative media that are growing really weary of hearing how great Al Jazeera is. They are painted to be some kind of glowing lighthouse in the midst of wildly treacherous seas. They are seen as a brilliant beacon in a land of perpetual darkness.

This is what the globalist left would love you to believe.

But a proper French translation of this narrative would be “Bull Sh**!!!”

The truth is that Al Jazeera is owned by Qatar’s Royal Family and Qatar is one of the biggest state sponsors of terrorism in the world. Period.

The globalists would love you to believe that there was no agenda in selling Al Gore’s Current TV to Al Jazeera and to create Al Jazeera America. The leftists would have you believe that Al Jazeera is one of the most credible news sources on the planet.

Unless you get your news from alternative sources you don’t often hear about the terrorist involvement of Al Jazeera.

You won’t likely hear about them doing the dirty work of the Muslim Brotherhood and other terrorist organizations. They work very hard to cover their tracks.

But once in awhile, as careful as they are to protect a false but sterling reputation, Al Jazeera shows its true colors. In a piece that is only available on their Arabic language site, Al Jazeera praised the recent Synagogue slaughter in Jersualem and stated it “was not terrorism” but a simple case of “self-defense.”

Here is a translation from Arabic courtesy of Elder of Ziyon:

The operation carried symbolic importance in targeting the synagogue, in a clear message to the settlers and extremists of all varieties and types that the attack on the Arab holy sites would lead to attacks on synagogues and their holy places. Palestinians do not attack the sanctities of other religions, but they are ready to convey the message clearly to all those who abuse their sacred places. The operation also was clear in terms of courage and bravery, coming among a number of bold operations carried out by Palestinians in recent times against the Israelis, especially in the city of Jerusalem, but this operation was the most daring because it was done with primitive weapons. The media picked up that the Palestinians used the gun, but the most important weapons were knives and hatchets. It was the courage of the operation, done suddenly and without warning.

This was not terrorism, as the US and Israel and their supporters say, but it was out of self-defense, and to save the Palestinian people.

These are the opinions of Professor Abdel Sattar Qassem as published by Al Jazeera. Though one man’s opinions should not necessarily reflect on the opinions of an entire news network, this might be the exception.

If Al Jazeera has no agenda then why did they not print the story in English as well?

Al Jazeera fools no one that actually has the capacity to think for themselves.

According to Elder of Ziyon, “Practically none of the commenters in the Arab world’s largest media outlet had anything negative to say about this article, although one said that attacking Jews in synagogue might backfire against the Palestinian Arab cause. Most people, however, praised the article.”

That is the truth of what you are up against. There are no moderates in Islam.