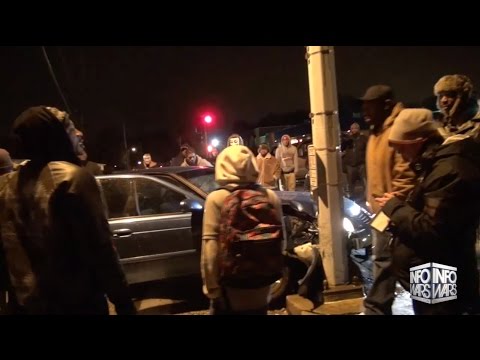 Brags about stealing iPhone 6 from “some nigger”

A video shot during last night’s riots in Ferguson, Missouri shows a live streamer having his camera stolen while broadcasting to nearly 100,000 people before the thief later brags about how he took an iPhone 6 from “some nigger.”

The live streamer begins by stating that he would continue to document proceedings “unless I’m in jail.” However, the most immediate threat to Bassem Masri was not the cops, but a street thug who snatches his phone and runs away at high speed while the live stream continues to run.

After fleeing the scene, the thief is asked by a woman what he has stolen, to which he responds, “iPhone 6.” The woman then appears to ask him who he took the phone from, to which the thief replies, “some nigger.”

As Carlos Miller highlights, despite the fact that the phone was quite patently stolen by a looter, Masri immediately blamed the cops, accusing them of sending a “police agitator” to steal the iPhone.

In another incident, a protester wearing an Anonymous mask disabled a live TV camera that was recording looting taking place at the Ferguson Market & Liquor store during Sean Hannity’s show. “Fuck you and fuck Fox News,” the protester shouted as he attacked the camera.

In another example of looting, two individuals decided that the best way to obtain justice for Michael Brown was to steal the biggest TV they could find from a local rental store.

These two decided that the best way to get justice for Michael Brown was to steal the biggest ass TV they could find. pic.twitter.com/ARo8XSY2bk — Paul Joseph Watson (@PrisonPlanet) November 25, 2014

Following the announcement that Officer Darren Wilson would not be indicted, President Barack Obama began the night by encouraging the media not to report on the “negative reaction” that would ensue.

St Louis County police chief Jon Belmar said rioters fired around 150 shots during last night’s unrest, labeling the scenes “probably much worse” that the rioting which occurred back in August. Numerous buildings and dozens of cars were set ablaze during the chaos.

“I didn’t see a lot of peaceful protest out there tonight, and I’m disappointed about that,” Mr Belmar said, adding that the fabric of the community had been “torn apart”.