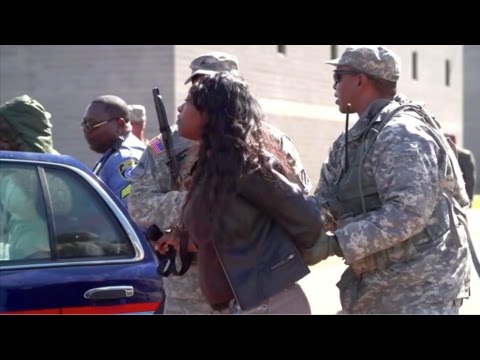 Editor’s Note: This article was originally published on July 17, 2014, weeks before the Mike Brown shooting that sparked the Ferguson protests which have now spread throughout America.

The video appears on the official YouTube channel for Guardian Centers, an 830 acre “disaster preparedness and tactical training validation center” located in Georgia which is routinely used by FEMA and other government agencies to practice emergency response procedures.

After the 2 minute mark in the clip, the scene cuts to a black woman who is struggling to escape from the clutches of a uniformed soldier. The area is surrounded by concertina wire and guarded by other troops.

The clip then shows the woman, along with another African-American, being handed over to local police before being driven away.

Described by CNN as the “doomsday Disneyland,” Guardian Centers is a mock city complete with a subway station that “allow(s) a variety of responders to do a variety of drills in one location.”

The sight of Army and National Guard troops training to detain Americans in prison camps is unlikely to quell concerns that authorities are preparing for domestic disorder.

Back in 2012, we reported on FM 3-39.40 Internment and Resettlement Operations, a U.S. Army manual that describes how political activists in prison camps will be indoctrinated by specially assigned psychological operations officers. The document makes numerous references to how government agencies like the DHS, ICE and FEMA will be involved in the domestic internment of U.S. citizens during “civil support operations.”

A second US Army Military Police manual that was leaked months later also outlined how military assets would be used domestically to quell riots, confiscate firearms and even kill Americans on U.S. soil during mass civil unrest.

A report produced in 2008 by the U.S. Army War College’s Strategic Institute warned that the United States may experience massive civil unrest in the wake of a series of crises which it termed “strategic shock.”

“Widespread civil violence inside the United States would force the defense establishment to reorient priorities in extremis to defend basic domestic order and human security,” stated the report, authored by [Ret.] Lt. Col. Nathan Freir, adding that the military may be needed to quell “purposeful domestic resistance”.

Rex 84, short for Readiness Exercise 1984, was established under the pretext of a “mass exodus” of illegal aliens crossing the Mexican/US border.

During the Iran-Contra hearings in 1987, however, it was revealed that the program was a secretive “scenario and drill” developed by the federal government to suspend the Constitution, declare martial law, assign military commanders to take over state and local governments, and detain large numbers of American citizens determined by the government to be “national security threats.”

Despite innumerable indications that the federal government is making preparations for riots, the Department of Homeland Security denied last year that it was gearing up for domestic disorder. In 2011, DHS chief Janet Napolitano directed ICE to prepare for a mass influx of immigrants into the United States, calling for the plan to deal with the “shelter” and “processing” of large numbers of people.

In the video below, Alex Jones highlights how the Guardian Centers video is yet another startling indication that authorities in the United States are preparing for civil unrest as America increasingly begins to resemble a militarized police state.