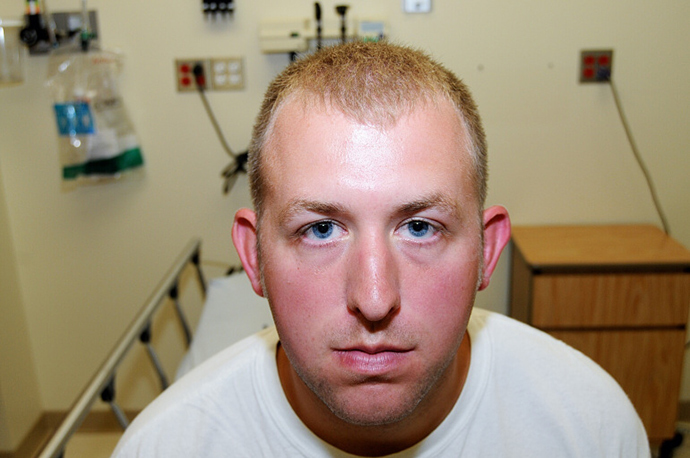 The court testimonies of those involved in the Michael Brown shooting lifted the lid on some of the most intriguing aspects of this incident. RT looks at 10 pointers from the investigation, which has left a nation divided.

In a rare occurrence, transcripts, heard by the jury in the case of Ferguson police Officer Darren Wilson who shot and killed Brown, have been made public. Normally, when no indictment is made, grand jury proceedings are kept secret. It also became public knowledge that when he killed Brown, it was the first time Wilson had used a firearm.

Cigar case and a black shirt

The first visual contact Officer Wilson had with Michael Brown was when he saw the teenager walking down the middle of the road with a friend, Dorian Johnson. After talking to the pair, Wilson alleges that Brown swore at him and “that drew my attention to Brown.” Cigarillos had previously been reported stolen from a local shop.

“When I start looking at Brown, first thing I notice is in his right hand, his hand is full of cigarillos. And that is when it clicked for me because I now saw the cigarillos. I did a double check and saw that Johnson was wearing a black shirt and these two are from the stealing.”

Stay on the sidewalk

Dorian Johnson, Brown’s companion said he thought they were going to be arrested after the convenience store theft. However, according to Johnson, Officer Wilson was only interested in them staying on the sidewalk , saying they couldn’t walk in the middle of the road. The pair ignored Wilson’s demand and this is when his demeanor changed, Johnson said.

“After he pulled back, there was no more sidewalk talk, it was nothing, it was just anger,” Johnson told the grand jury. This led to a scuffle between Brown and Wilson with each holding the other’s shirt and arms. “At the time I couldn’t open my mouth. I couldn’t speak. I wanted to say could someone calm down … I’m still standing there, more shocked than ever because I see it is escalating, I can see and hear the cuss words, I can see the frowns on their faces getting more intense.”

Officer Wilson is bigger than most grown males, standing at a just under six feet, four inches (1.93 meters) and weighing 210 pounds (95 kilograms). Nevertheless, he described himself feeling “like a five year-old holding on to Hulk Hogan,” in reference to the famous wrestler.

“I see his hand come back around like this and he hit me with this part of his right here, just a full swing all the way back here and he hit me right here (pointing to his face). After he did that the next thing I remember is how do I get this guy away from me? What do I do not to get beaten inside my car?”

Officer Wilson admitted he hadn’t been carrying a Taser while on duty and that he preferred not to use one. He had a can of mace as a deterrent. If Wilson had been armed with a Taser, then the situation could have been different and he wouldn’t have used deadly force against Michael Brown.

“I normally don’t carry a Taser, we only have a select amount. Usually there is one available but I elect not to carry one. It is not the most comfortable thing. They are very large and I do not have a lot of room at the front for it to be positioned.”

The gun is the only option

Officer Wilson said he rejected a number of alternative options such as using mace, for fear of blinding himself, a flashlight or his ASP baton, saying, “the only other option was my handgun.”

“I drew my gun, I turned. I said ‘get back or I’m going to shoot you.’ He immediately grabs my gun and says ‘you’re too much of a pussy to shoot me.’ He grabs it with his right hand and twists it and then digs it down into my hip.”

Officer Wilson is a big man, but he was an inch shorter and 80 pounds lighter than Brown, who was not inside the vehicle, when he confronted Wilson.

“I felt that another one of those punches could have knocked me out worse, I mean it was, he’s obviously bigger than I was. I have already taken two (punches) to the face and the third one could be fatal if he hit me right, or at least unconscious and who knows what would happen to me after that.”

The ‘look of a demon’

As the struggle continued, Officer Wilson, who was still inside the vehicle said that Brown, who was standing by the car window, had the “most intense aggressive face” and that he “looked like a demon.”Wilson said the teenager came at him once again with his “hands up,” which is when he decided to pull the trigger.

“It went off twice in the car. When I look up after that, I see him start to run and I see a cloud of dust behind him. I then get out of my car. As I get out of my car, I tell dispatches ‘shots fired, send me more cars’.”

After a brief chase, “I tell him to get on the ground, get on the ground. He makes a kind of grunting sound and he turns back towards me. He kind of does a stutter step to start running. When he does that, his left hand goes into a fist and his right one goes under his shirt in his waistband and then he starts running at me.”

Officer Wilson said he fired a series of shots. He didn’t remember how many, though he knew he had hit him because “I kind of saw his body jerk or flinch.” The police officer also remembers having “tunnel vision,” as he was concentrating all the time about what might be in Brown’s right hand. After telling the teenager to get on the ground again, Wilson fired off another round saying that he hit him at least once.

“At this point it looked like he was almost baulking up to run through the shots, like it was making him mad that I was shooting at him. He still keeps coming at me, gets about eight to ten feet away. At this point I am backing up pretty rapidly. I remember looking at my sites and all I see is his head and that’s what I shot. I don’t know how many, but at least once as I saw the last one go into him. The demeanor on his face went blank, the aggression had gone.”

Officer Wilson had made a call for back-up hoping to buy himself 30 seconds in order to make an arrest. However, it later emerged that he had his radio on the wrong frequency, so no one would have heard his call. “I looked at it (the mike) and I was on channel 3. I was like I don’t know what was heard and what wasn’t heard.” He left his car as he feared that Brown might get away. “When he ran, (I thought) just stay with him. Someone is going to be here, you know, we will get him.” The police officer added that he never saw Dorian Johnson (Michael Brown’s friend) after their initial encounter.

No photos were taken at the scene of Brown’s killing simply because the camera battery was flat, the grand jury was told. The investigator who arrived at the crime scene to collect evidence for the pathologist also didn’t take any measurements, saying: “It was self-explanatory what happened. Somebody shot somebody. There was no question as to any distances or anything of that nature at the time I was there.”

The investigator also added that he hadn’t found any evidence of gunpowder around the wounds on Brown’s body.

Editor’s Note: Here is a link to a full set of 75 documents released by the Grand Jury.