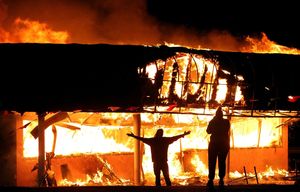 “Some of the protagonists in Ferguson are beginning to get honest in their impatience for the grand jury verdict. They’re saying, ‘This isn’t about Brown, the gentle giant.  This is about changing the system.’ ”

This isn’t exactly a revelation, but it was nice to hear it put out there separate from my own internalized thoughts and expressed by a prominent public figure like Limbaugh after months of watching all of this arranged and coordinated nihilism drag on in perpetuum with no seeming end in sight. Then the grand jury finally released their long awaited verdict to the public Monday evening, announcing to the country that officer Darren Wilson would not be indicted for his part in the shooting death of Michael Brown. Predictably we had the subsequent spectacle of iconoclast dregs erupting with their anticipated infuriation and setting the community on fire. That this aggregate horde had been granted to foment so much racist animus and divisive contention for as long as they have is opprobrious when you realize the underlying racial motives of the politicizing impetus driving this movement. But then when you have a sitting United States president holding a secreted palaver with militant members of this ensemble, telling them to “stay on course“, then this subsequent havoc raging in Ferguson and across other regions of the U.S. on lesser scales is precisely what you get courtesy of America’s first black president.

I’ve been saying for some time that the majority of these community combatants are little more than opportunists who’ve hijacked the death of a thug as the vehicle to take us all on their bigots partisan joyride with. Its been widely reported that bona fide citizens of this ravaged St. Louis suburb simply would like to have their community back from the incursion of  invading community organizers and their imported attendant mercenaries who have descended upon their town. A platoon of eclectic agitators and provocateurs who have made Ferguson ground zero for their extremists theater of operations.

In the meantime, a consensus of the featured opinions broadcast in the early hours of Tuesday morning on Fox News trailing the aftermath of the grand jury’s decision and the consecutive calamity it provoked, I saw nothing but a confluence of criticism expressed by blacks (especially among some black reporters on the ground in Ferguson), that made it evident to the reality that regardless of the evidence, testimony and those facts presented which led jurors to their determination of a not guilty verdict, nothing short of a guilty verdict against officer Wilson would satisfy them or sate their emotion driven avidity for a reckoning. To hell with due process or anything for that matter which would preclude the single mindedness to their distorted beliefs in a spurious form of justice. They want what they want, even if acquiring their desires involves coercion through threats or outright acts of violence. Never mind the mass exculpation all these critics have conveniently shown towards Michael Brown’s own iniquity and culpability in the chain of events which led to his death. That would require their having to acknowledge Brown’s wrongdoing and they can’t have anything that would interfere with their efforts in transcending Brown’s public image from thug to Sainthood.

The sort of people this mentality inhabits take no account or stock of personal accountability or responsibility. They make no reference to the retrogressive, dysfunctional state of a sizable portion of their own black community they’ve allowed thanks to 50 years of subversive Democratic initiative and “compassion”. Given the already consanguineous deterioration in the black community Democrats had wrought, this only became exacerbated with the introduction of gangsta rap followed by its inculcating effect where the killing of cops, pimping ho’s and relying on gun violence as a principle means of conflict resolution were prevalent themes upon which its retrograding influence thrived. Basically glorifying the more base characteristics and traits of human nature to impressionable audiences who began viewing this as a lifestyle to emulate and a social status to aspire towards. Consequentially, this was a cultural contribution where blacks definitely did neither themselves or society as a whole any favors.

That said, how any person of color today could affiliate themselves with the political Party that sought to keep their ancestors and entire race enslaved in perpetuity while vilifying and denouncing the other political Party that fought for their freedom is obscene in its backwardness. But backwards has become the new normal in America under Barack Hussein Obama’s administrative dispensations thanks to decades of Progressives and their politically correct insurgence paving the way for him. 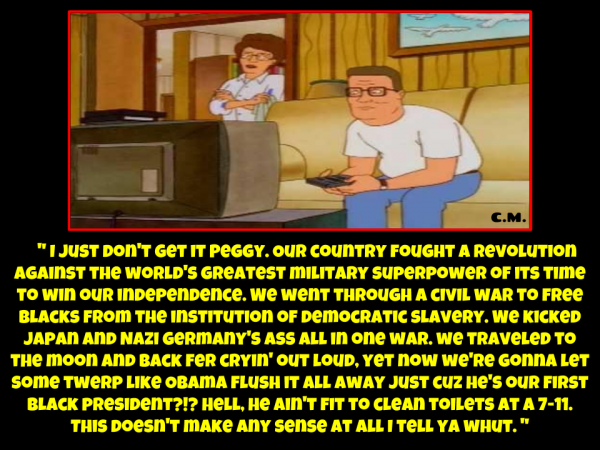 I’ve listened to enough about Ferguson in the past couple of days to last me at least 2 lifetimes. Both about Ferguson and this entire sordid cast of characters fanning and feeding the flames at its core. There’s literally been no end to the variegated commentaries, opinions and continued  agitation of tensions sent up on airwaves into the stratosphere, destined for the vast regions of deep space. At this point I think of them more as transmitted warnings being beamed out to any potential intelligent life in the universe wherever they are who just might happen to intercept them, disseminate and interpret for themselves at what a messed up state humanity is in today. If they would have had us on their travel list previously as a potential vacation destination, I’m willing to bet they’ve set up a cosmic detour around our solar system by now.

There are no solutions to any of this because there are just too many invested parties who profit from our remaining divided and against each other. There are too many discordant dissentient’s striving for the subjugation of our country. That and there’s also too many useful idiots willing and eager to do the grunt work for these antagonists. Bottom line, this is how the rule of law has deteriorated in Obama’s depraved vision for America on the breath of all his spoken “fundamental transformation”, “hope and change” bull crap. As far as Obama’s concerned Americans are just too stupid and after 6 years of his escalating abuses he now sees that there’s virtually nothing he can’t get away with thanks to either certain GOP RINO’s submissive acquiescence or corrupt collusion. 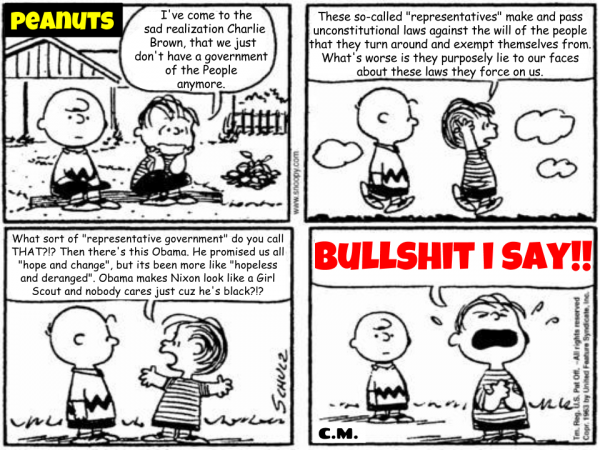 That sounds cynical, but it’s a cynical world we live in. Nothing’s going to change until the people finally decide they’ve had enough of this factious aristocracy of egocentric ruling class blue bloods and their media douche nozzle transcribers. With 2 years still left of his second and final term, Obama’s going to end up turning our entire country into one big Ferguson inferno if the last 6 years of this community agitator are any indication.

So buckle up happy campers because these next 2 years are going to be a helluva ride. Obama will guarantee that. 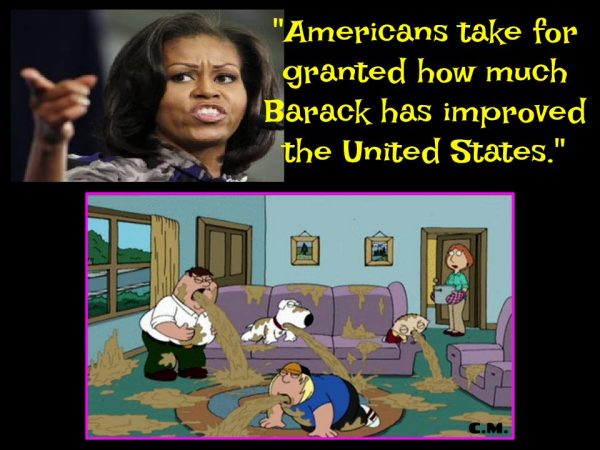