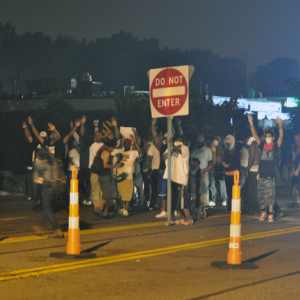 Was it a conspiracy or was it incompetence?  Those appear to be the only two alternatives that we are left with after the horrific violence that we witnessed in Ferguson on Monday night.  The first round of Ferguson rioting back in August took everyone by surprise, but this time authorities had more than three months to prepare.  They had the ability to control precisely when the grand jury decision would be announced and how many cops and National Guard troops would be deployed on the streets.  But despite all this, the violence in Ferguson on Monday night was even worse than we witnessed back in August.  Either this was a case of almost unbelievable incompetence, or there was someone out there that actually wanted this to happen.  If someone out there is actually trying to provoke more violence in Ferguson, then the rioters are being played like a fiddle.  Most of them have no idea that they could potentially just be pawns in a game that is far larger than they ever imagined.  The only other alternative to explain what we just saw is incompetence on a level that is absolutely laughable.  Something definitely does not smell right about all of this, and let us hope that at some point the American people get the truth.  The following are 10 “coincidences” from Monday night in Ferguson that are too glaring to ignore…

#1 Federal, state and local law enforcement authorities had more than three months to prepare for the violence that would follow the announcement of the grand jury decision.  The mainstream media endlessly hyped this controversy and everyone knew that trouble would be brewing.  But despite an enormous amount of time to prepare, very little was actually done to prevent any violence from happening.

#2 Someone made the decision to make the public announcement about the grand jury decision in the evening.  Anyone involved in law enforcement knows that crowd control is far more difficult after dark.  This also ensured that instead of being tied up with work or school, a maximum number of protesters would be able to be involved in the violence.

#3 Fortunately for the mainstream media, the announcement of the grand jury decision was perfectly timed to provide the largest possible number of prime time viewers for the big news networks.

#4 Just like back in August, no law enforcement authorities of any kind responded while dozens of businesses were vandalized, looted and set of fire.

#5 According to Ferguson Mayor James Knowles, National Guard troops were purposely held back from intervening in the rioting that was unleashed when the grand jury decision was made known to the public…

In a press conference, he called the delay “deeply concerning” and said the Guard troops were availablebut were not deployed when city officials asked.

The troops had been readied last week by Gov. Jay Nixon as the grand jury announcement neared. But as gunshots rang out in the night and looters torched buildings, they were nowhere to be seen.

#6 It is being reported that the heavily armed National Guard troops were limited to “keeping the peace at a courthouse, patrolling the outskirts of town and preventing disturbances in other suburbs” as horrific violence raged in the heart of Ferguson on Monday night.

#7 Missouri Lieutenant Governor Peter Kinder has accused Missouri Governor Jay Nixon of holding back the National Guard troops because of pressure from the Obama administration.  On Monday night, he angrily made the following statement to Fox News…

“Is the reason that the National Guard was not in there because the Obama Administration and the Holder Justice Department leaned on you to keep them out? I cannot imagine any other reason why the governor who mobilized the National Guard would not have them in there to stop this.”

A top aide to Holder called the governor’s office earlier this week to express Holder’s displeasure and “frustration,” according to a Justice Department official.

“Instead of de-escalating the situation, the governor escalated it,” said the official, who spoke on the condition of anonymity because he was not authorized to speak on the subject. “He sent the wrong message. The tone of the press conference was counterproductive.”

#9 Firefighters in Ferguson did not immediately respond to calls to put out the multiple fires that were set by protesters.  As a result, many businesses essentially burned to the ground.  But this did make for some amazing television footage.

#10 In the worst of the “war zones”, journalists with cameras and microphones were crawling all over the place while there were hardly any police to be seen at all.  How is it possible that law enforcement could have failed so badly?  Could it be possible that this was orchestrated on purpose?

Sadly, as I have written about previously, the civil unrest that we are witnessing in Ferguson is just a small preview of what is coming to America.

The anger and frustration that are seething under the surface in this country have reached a boiling point.  Instead of coming together, we are seemingly more divided than ever.  Americans have been trained to hate one another, fear one another and blame one another.  I fear that we are not too far away from actually becoming ungovernable.

And when the next major wave of the economic crisis strikes and we start experiencing real suffering in this nation, the temper tantrums that we are going to witness in our major cities are going to make what is happening in Ferguson right now look like a Sunday picnic.

So buckle up and hold on, because it is going to be a really bumpy ride from here on out.

Ferguson is not the end – it is just the beginning of a horrible new chapter in American history.

Courtesy of The Financial Collapse Blog.