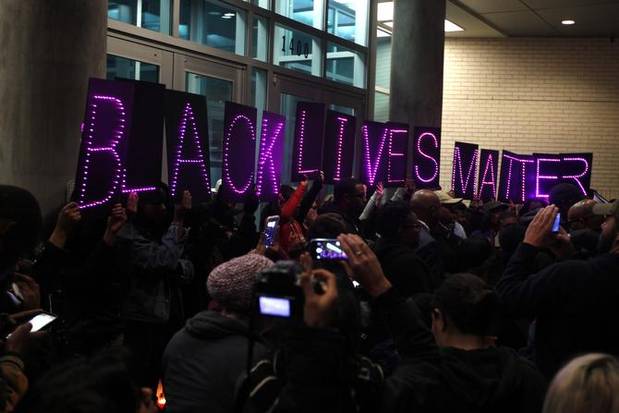 People in Dallas, wanting to protest the Ferguson grand jury’s decision not to indict Officer Darren Wilson in the shooting death of Michael Brown, got a big surprise when Dallas Police stepped in to shut them down.

Nearly 200 protesters gathered near the Dallas Police headquarters and began to march into downtown Dallas, eventually making their way onto I-35, where they sat down and blocked traffic.

Police closed northbound lanes of I-35 near Commerce as protesters sat down on the road. Just after 10 p.m. police were seen arresting those who refused to leave, using zip ties as handcuffs. Just before 10:30 the protesters left and headed back toward DPD headquarters.

The protest earlier in the evening at DPD was peaceful with black, Hispanic and white participants – including some parents with children.

Dallas police had plain-clothes officers on the edge of the group just observing, but no show of force. Other officers in patrol cars protected them by blocking traffic so no one would get hit.

According to News 8 Crime Reporter Rebecca Lopez, DPD officers are trained not to escalate a situation, so they watched and monitored the situation and backed off when agitators attempted to get a reaction out of them. Dallas police told us commanders will wait out protesters instead of forcing them to leave and won’t bring out riot gear or pepperball guns because it only agitates protesters further, as the department learned in a tense situation with protesters two years ago in Dixon Circle.

Protesters seemed to wander through the downtown streets with no destination.

Reporter David Schechter tweeted out these photos from Tuesday’s protest:

Seems like there is some wisdom in the Dallas Police Department in how they handle this type of situation.

Protesters voiced their reasoning for protesting.

“I wanted to come out here and let them know that me, I’m not taking no more,” Anthony “Zulu” Fisher, who claimed he was a member of the original Black Panthers group, said. “Enough is enough. It’s like open season on us now. You can shoot a black man or shoot someone and get away with it.”

Perhaps Mr. Fisher and Mr. Smith need to listen to the facts on what the real racial crimes are.

Incidentally, no violence erupted. This was on Tuesday.

On Wednesday, members of Come and Take It Texas, an open carry group, followed a smaller group of protesters into the downtown area to ensure there would be no rioting or looting. The protesters remained peaceful and that is what the open carry group wanted to see take place as they respected the right to protest, but wanted to ensure that private property was not damaged in any way.

I’d say that things went well between all parties and the very things that were the catalyst to the violence in Ferguson were kept at bay by actual peaceful protesters, wise police officers and ordinary citizens exercising their rights which are protected under the Second Amendment.