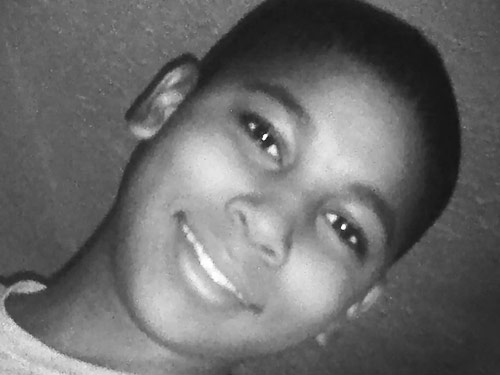 While everyone is busy emotionally investing themselves in the muddy waters of the Darren Wilson/Michael Brown police shooting case in Ferguson and the highly orchestrated aftermath, a 12-year-old boy named Tamir Rice was shot and killed by police at an Ohio playground over the weekend reportedly because he was carrying a BB gun that the officers somehow mistook for a real gun and a real threat.

Well now that video has been released, and what we see is that the responding officers involved — six-year force veteran Frank Garmack, 46, and Timothy Lowman, a 26-year-old rookie who had only been with the department nine months — did not appear to even hesitate for a second after leaving their patrol car before one of them shot the boy.

The officers involved, including one of which who fired the two shots at Tamir that killed him, have been placed on administrative leave for three whole days, after which they will return right back to the force on restricted duty.

The 9-1-1 caller clearly informed the dispatcher that the toy gun the kid had was “probably fake,” just by the way.

While arguments can be made that officers are trained to go into every situation with the assumption of a real threat, this is a 12-year-old boy walking around a park with a toy and even the 9-1-1 caller said he appeared to be a juvenile and that the gun was “probably fake,” then later the caller reiterated that he didn’t “know if the gun was real or not.”

So that’s TWICE dispatch was told the gun Tamir was carrying might not be real.

But the police department’s statement, which fails to mention that fact, makes it seem like the kid was going to shoot the cops so they had no choice but to kill him. “Upon arrival on scene, officers located the suspect and advised him to raise his hands. The suspect did not comply with the officers’ orders and reached to his waistband for the gun. Shots were fired and the suspect was struck in the torso.”

The department’s statement also failed to mention that the officers were standing less than ten feet away from Tamir when all of this went down.

So we are being asked to buy that a 12-year-old would ‘go for his weapon’ with intent to harm when police arrive with guns drawn?

Cleveland police are asking us to believe that an armed police officer drew a gun on a 12-year-old who was armed only with a toy weapon, and instead of complying or even ignoring the officer, the child reached for the gun to presumably aim it at the officer?

The Cleveland police are essentially asking us to believe that this 12-year-old was at the park for the purposes of “Suicide-by-cop.” Clearly no 12-year-old would think that they could get in a real shoot out with an officer, if they were armed only with a BB-gun. So the purpose of allegedly drawing the gun would only be to have the officer shoot him. That is the implication that the Cleveland Police Department’s official statement makes regarding this shooting.

It is more likely Tamir was reaching for the pellet gun to show the police that it was just a toy…but then again, common sense never seems to prevail in the American police state.

Worse than the loss of an innocent child’s life are some of the comments in response to his death. Here’s one that was left on the video of the shooting:

The continued ratcheting up of the American police state is an end run around the 2nd Amendment. We are all being trained like good little sheep that having a gun, any gun — even a toy gun — in America is dangerous unless we want to potentially pay with our lives.