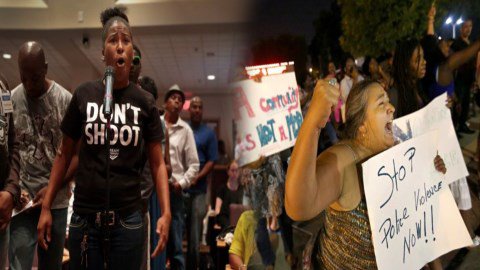 I think most people are in favor of lawful, peaceful protests. However, in Ferguson, while some protests have been peaceful, others have not been peaceful. It’s now being reported that at least two protest leaders have become victims, not of the police, but their own neighbors. One woman had her car stolen while another had her home burglarized. Perhaps it’s time they got a wake up call.

First, take a look at Elizabeth Vega. She is a Ferguson protest leader. According to the Gateway Pundit:

She protested at sports venues and attempted a banner drop. She co-led the St Louis Symphony interruption, was arrested at the pumpkin smashing, yelled at the St Louis Post Dispatch protest, and helped block traffic with her freakshow in Clayton yesterday.

While yelling “F*ck the Police!” apparently her car got stolen.

She later tweeted out the theft:

Does anyone assume that after her rant she dialed up the police to report the theft? Ms. Vega clearly believed that Brown was murdered by evidence of the tweets she sent out and retweeted. Now that justice has been served, she isn’t satisfied because it’s not the way she imagined justice would be. By the way, she did inform everyone that she got her car back.

Twenty-year-old Alexis Templeton has been on the front lines of protests since she arrived in Ferguson, five days after Brown was shot.

“I was in Phoenix, Arizona, when Michael Brown was shot and killed. When I got back, I immediately hit the ground, standing at the front of riot lines, being face to face with the police,” she said. “That was me for the last 89 days. Tomorrow, it will be three months, the days start to blend together.”

She is a member of Millennial Activists United, a group that was founded in the aftermath of Brown’s death to unify younger Ferguson residents who are fighting to make their voices heard. She says her fellow protesters have become her new family. Trying to create change in her community has become her everyday life.

“I’ve been a Ferguson resident for 13 years,” Templeton said. “Before this happened, I never attended a city council meeting, I never went to a town-hall meeting, I didn’t know there was a newsletter.”

“Now, I attend the city council meetings and people actually want to talk to me. Before, no one would want to talk to us (the younger community.) Now, they wait for me to address the crowd.”

“I wouldn’t say the racial divide is starting to come together,” she added, “but people are starting to acknowledge that there is one so we can start to bridge that gap.”

On November 18, Templeton tweeted out that her house had been looted.

Someone broke into my house…

I’m ok. My grandma’s ok. The house is intact. A few things stolen, but it’s all good. Thank you all for the support.

Do you think Ms. Templeton filed a police report? I’m guessing so.

The question I have for Ms. Vega and Ms. Templeton is very simple, when will we see you begin to protest those that loot and damage property in the same manner and with the same energy that you have protested the death of a thug punk like Michael Brown? When will you begin protests against the real problem in your own community, your own people?