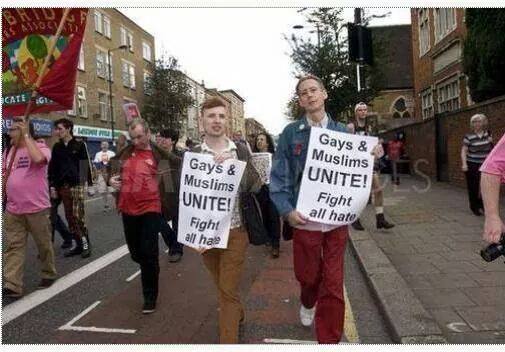 Just when you thought you had heard it all, it always seems to get a little more interesting.

Whether you are in support of homosexuality, or against it, you likely understand the most common arguments. Those arguments tend to center upon morality and an interpretation of such.

There are also medical arguments. Homosexuality carries a number of health risks with it as well.

But in Malaysia, a delegate recently unveiled two stunning new arguments against a homosexual lifestyle.

You may want to sit down for this.

What if your sister’s lesbian mate has bigger breasts than your Mom?

How would that make your Mom feel?

As if that isn’t bad enough, what if your brother’s gay buddy has a nicer mustache than your Dad?

That would be horrible.

This is just another shining example of how clueless many Muslims are and why we don’t need to keep bringing them in to a country where our arguments tend to be loaded with elements of common sense rather than Mohamedian fantasy.

A Selangor state, Malaysia delegate at this week’s UMNO party general assembly in Kuala Lumpur has warned against allowing LGBTI people to have equal rights in the majority Muslim South East Asian nation – but not for the reasons you would think.

‘Malaysian mothers would be forced to face the harsh possibility that the partners of their daughters could have bigger breasts than them some day,’ Kijo warned, according to MalayMail Online.

‘Could you imagine how shocked the mother would be when she sees that this future “husband” [sic] has breasts bigger than hers?’

‘The breasts may be bigger than those owned by your mothers, ladies and gentlemen.’

Kijo also warned that allowing gay sons to get legally married could lead to the prospect of them bringing home partners with mustaches that put their father’s to shame.

Just in case anyone else is wondering what the “I” in “LGBTI” stands for, it is “intersexed.” I looked it up.

In order to co-exist with these people, as is the will of the left, we need to make sure that we follow their guidelines. Big breasted lesbians need to use their Obamacare benefits to remove any excess baggage that could be deemed offensive.

Gay men must be clean shaven at all times. And for any of the gay men who frequent The Clothesline (hi Barry, I’m talking to you) please remember that I am only talking about facial hair.

You are still a man.

And so the journey continues toward the promised Utopia and a world where gays and Muslims can peacefully co-exist.