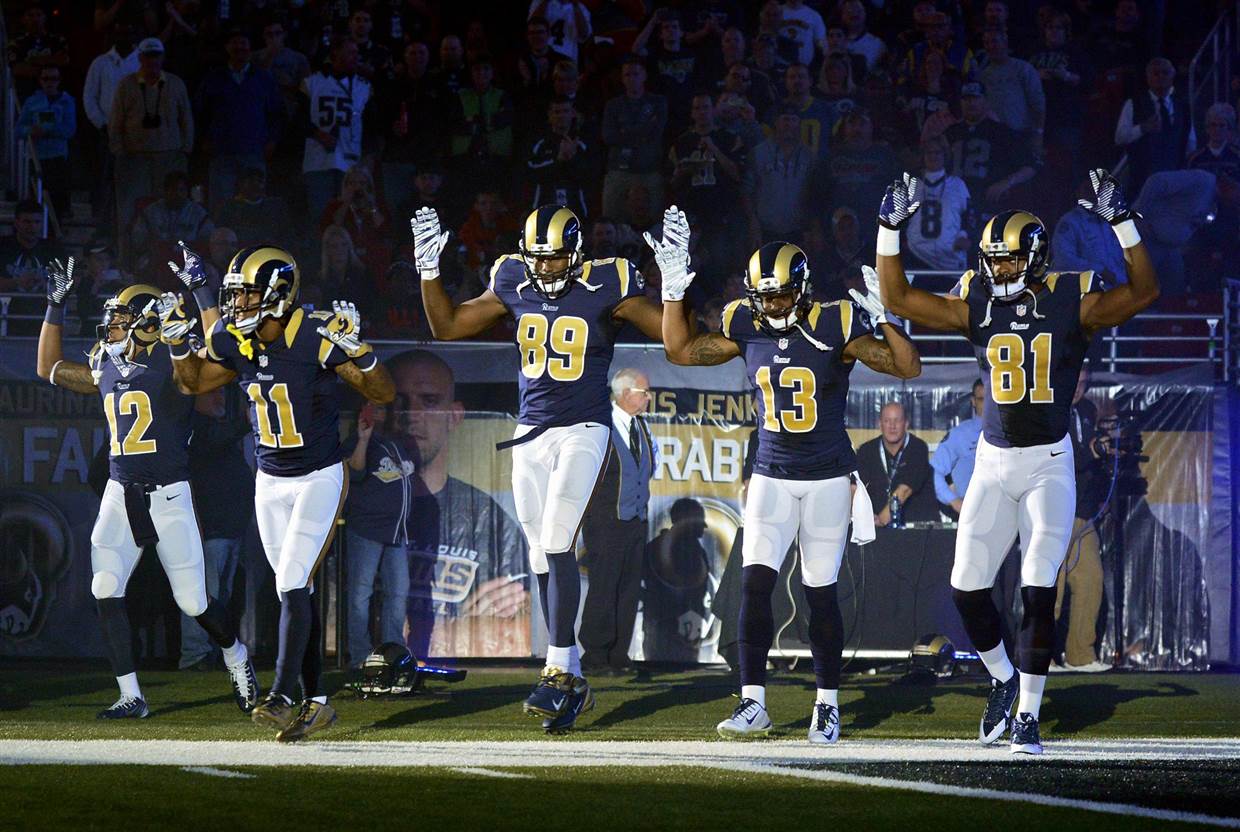 Much was made of five St. Louis Rams players who trotted onto the field Sunday with a “Hands up — don’t shoot” pose. It was reminiscent of a stunt pulled by some Washington Redskins earlier in the season. There are glaring differences, however.

The Redskins players made their statement before much of the evidence was in and weighed by a Grand Jury. Those players also didn’t represent the town of St. Louis.

For those who are unaware, Ferguson is part of the St. Louis Metropolitan area.

The gesture was a show of solidarity with the Ferguson protest movement after this weeks controversial grand jury decision to not indict officer Darren Wilson.

Solidarity with Ferguson? Who do these guys think they are, Garth Brooks?

Among other things, these five players infuriated a lot of local police officers, as well as countless fans. The St. Louis Police Officers Association wasted little time in responding on Sunday. Here is a brief section from that statement as reported by KSDK:

SLPOA Business Manager Jeff Roorda said, “now that the evidence is in and Officer Wilson’s account has been verified by physical and ballistic evidence as well as eye-witness testimony, which led the grand jury to conclude that no probable cause existed that Wilson engaged in any wrongdoing, it is unthinkable that hometown athletes would so publicly perpetuate a narrative that has been disproven over-and-over again.”

Were these five athletes representative, in any way, of the great city of St. Louis? Or were they more concerned about representing “thug culture” in St. Louis?

I thought it might be fair to look at these five Rams’ players this morning, because some might say that they are a little “thuggish” themselves.

Kenny Britt is one of two former Tennessee Titans who now wears a St. Louis Rams’ jersey. Britt seems to have quite a colorful recent history with law enforcement.

Tennessee Titans football star Kenny Britt was arrested in Hoboken yesterday, only one day after he pleaded guilty tocareless driving in his hometown of Bayonne,officials said.

In July of 2012 he took his traveling drunken road show to Ft. Campbell, Kentucky. As reported by WKRN.com:

Bob Jenkins, spokesperson for the military base, said Britt was taken into custody around 3:30 a.m. outside Gate 4 after he failed a field sobriety test and refused to take a breathalyzer.

His vehicle was impounded at the post after he was released by military police on his own recognizance.

In August of 2012 Britt was suspended by the NFL for violating the league’s personal conduct policies.

The NFL suspended Titans wide receiver Kenny Britt one game for repeated violations of the league’s personal conduct policy, according to sources familiar with the situation.

The suspension comes nearly 3½ weeks after Britt was summoned to New York to meet with Commissioner Roger Goodell for the second time in a year.

Did Britt learn anything from his suspension?

It would appear not.

In June of 2014 he was again arrested in New Jersey on three charges, according to Foxsports.com:

Tennessee Titans wide receiver Kenny Britt was arrested on three charges Tuesday afternoon after a car chase in his hometown of Bayonne, N.J., FOXSports.com has learned.

A Bayonne police spokesman told FOXSports.com that Britt was charged with eluding a police officer, lying to an officer/hindering apprehension and obstructing governmental function. Eluding an officer is a third-degree felony; the other two charges are misdemeanors.

Kenny Britt stands with Ferguson thugs. You might also find his picture on the wall of your local post office.

Tavon Austin is no Kenny Britt but give him time. He made a big splash before his rookie season (2013) when the Rams’ front office became unimpressed with the fact that he was fraternizing with known strippers on Twitter. SBNation reported in July of 2013:

St. Louis Rams wide receiver Tavon Austin found himself in a bit of trouble with his new bosses this week. Speaking to high school athletes at Nike’s The Opening, Austin said that he got called to the GM’s office for following a couple of strippers on Twitter:

Tavon Austin: "three strippers followed me, I flowed them back. Next thing I know I'm in the GMs office. Now I'm off twitter" Classic.

It should probably be noted that Austin was not “off Twitter.” He continued to Tweet in spite of the claim:

It should be noted that Austin is still on Twitter, making retweets as of Tuesday morning.

Austin is only in his second season with the Rams. Give him time. Thugs take time to develop. Keep in mind that this incident happened after Austin was drafted but before he had ever played a single down in a St. Louis Rams’ uniform.

Jared Cook is another former Tennessee Titan who will be sorely missed. The Titans threatened to slap a franchise tag on him but he requested, or some say demanded, a trade.

Loyalty to his employer does not seem to be his strong suit.

Loyalty to his teammates is not his strong suit either. After dropping a sure touchdown pass earlier this season, he showed his true colors by pushing the quarterback, Austin Davis, who must have insulted him terribly by tossing a perfectly catchable pass his way.

Chris Givens doesn’t have much of a rap sheet but he was once suspended for a “violation of team rules.” This suspension came after a streak of five straight games in which Givens had caught a long pass of 50 or more yards. Anyone who understands football will also understand that 50 yard catches are rare. NFL teams like to win so this must have been a major violation of “team rules” in order for him to be benched.

Shortly after announcing both players would be inactive for Sunday’s game against the 49ers, the team passed along word that both players were deactivated for an unspecified violation of team rules.

Givens, a fourth-round pick, has been a big part of the team’s passing game in recent weeks and has caught a pass of 50-plus yards in each of the last five games.

Again, after five consecutive games with long catches it would presumably be a serious offense for most NFL organizations to bench a budding star like Givens. This happened in 2012.

Stedman Bailey was a problem child long before he ever became a professional. While at West Virginia, in 2012, he was caught shoplifting.

According to Sporting News:

West Virginia receiver Stedman Bailey was cited by police for allegedly shoplifting over the counter cold medicine, according to the Dominion Post.

Bailey was caught with the medicine Theraflu, valued at $4.99. Because he was not arrested, no further details were available. Employees at the Kroger grocery store detained Bailey until authorities arrived, saying he was in the office and being cooperative, according to the paper.

More recently, in May of this year, Bailey was suspended by the NFL for violating the substance abuse policy. It would appear that he tested positive for performance enhancing drugs.

It looks like the Rams will be down a receiver for the first four games of the 2014 season.

Ian Rapoport of NFL Network reports that Rams wide receiver Stedman Bailey has been suspended for a violation of the league’s policy on performance enhancing drugs.

Stedman Bailey is just another thug who thinks he can break the rules and get away with it.

These five men may not be hardened criminals, but they are obviously not choir boys either.

Also, keep in mind that The NFL minimum salary for 2014 is $420,000. Each of these players is making more than that. The figure quoted is for rookies and all of these men are at least two years into their NFL careers.

You would think that anyone making that kind of money would know to keep their mouths shut and do their jobs. Some of these players are making substantially more because the above figure is a league minimum. I’m sure some have an extra zero added to their annual salaries.

Still these aren’t five men who anyone should take seriously. Despite skills, success, and the money that goes with it, they seem to have their own unique set of attitude problems.

The above research took roughly an hour to gather. I am sure there is more dirt out there. But that is not the point. These men are not entirely atypical of professional athletes. They act as though the world owes them. They seem to act a lot like that thug, named Michael Brown, who entered the convenience store and decided that a box of cigars belonged to him.

Should we take Sunday’s shenanigans seriously?

In this case, we are simply giving free PR to five idiots who have probably had their hands up on more than one occasion.

This is just one more reason to boycott the NFL.