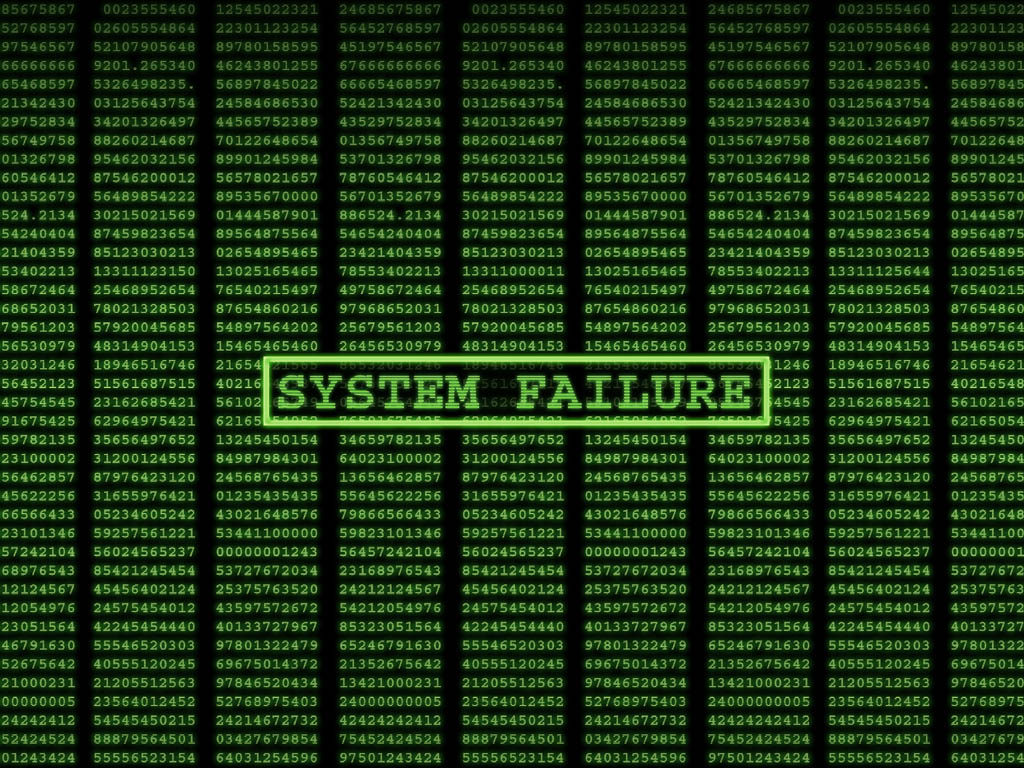 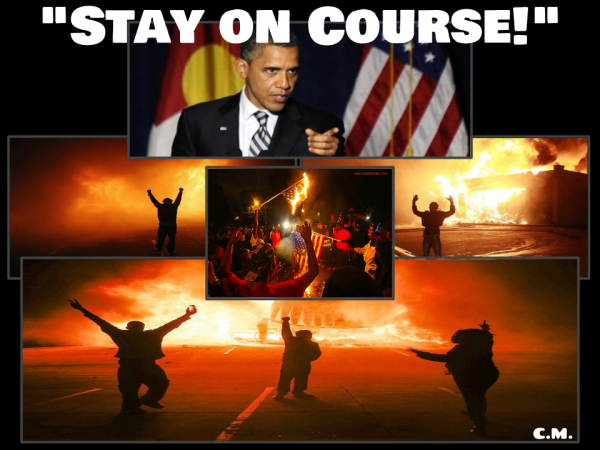 Ferguson, Missouri has become a tragic testament underscoring Barack Hussein Obama’s accelerating decline of our country. A precipitous descent encouraged, supported and capitalized on by America’s first black president. Ferguson can be seen as the cumulative byproduct to this circuitously calculated and denigrating sabotage against the rule of law Obama has instituted pretty much from the onset of his presidency. A purposed strategem vigorously eroding away the distinctive attributes to the defining characteristics that distinguish right from wrong, and has in the process inverted those definitions, exchanging one for the other to such an extent we now have criminals literally dictating the rule of law in parts of our nation. Namely Ferguson, Missouri. Predictably, many understand that no accountability will be sought for Obama and U.S. Attorney General Eric Holder’s roles in having clandestinely agitated this orgy of destruction in Ferguson. A bonfire of congregative insanities responsible for the destruction of more than 2 dozen businesses and livelihoods in this suburban community, with many more than that in the number of lives damaged by this horrific spectacle of senseless nihilism. Many irreparably. Where we have rampaging cercopithecoids not content to satisfy their atavistic urges with rioting, looting and mass property damage, but now more recently having stooped to murder as well. And for what?!? A black man who made the conscious decision to ruthlessly assault a police officer and attempt to take that officers firearm and was remunerated for his poor choice with a bullet to the head? Good riddance.

With each consecutive development to this degenerative chain of events, circumstances go from bad to worse as these roving packs of dissentious transgressors appear determined to continue displaying the most depraved, debauched traits and characteristics human nature has to offer up. Even as these peaceful protesters insist black lives matter upon their rally cry of “Hands up, don’t shoot”, as they wantonly destroy other peoples lives and livelihoods with neither a second thought or a shred of remorse. Exhibiting and reinforcing with their own deliberate and premeditated behavior the very same racial stereotypes and prejudices they perpetually accuse white people of harboring against blacks. Compiling insult on top of injury with their delirious attempts to try justifying and defending their indefensible behavior, completely abdicating themselves from accepting any personal responsibility for their conduct in this matter whatsoever. I mean listening to the cognitive processing that goes into some of these peoples efforts to try and articulate their reasoning when they’re put in front of a camera is such a visceral offense on any sagaciously minded persons common sense. It’s sickening to hear so many people invested in so much ignorance and seeing that ignorance not only encouraged AND emulated, but rewarded too.

And just like we understand that no accountability will be undertaken against the Community-Terrorist-Organizer-In-Chief, by extension we know too instinctively that no indictments will be forthcoming against those people belonging to the sundry organizing groups who helped coordinate and fund this unprecedented display of domestic terrorism on American soil. Innocents must necessarily suffer while the guilty are allowed to walk free. THAT’S the new executive precedent for the rule of law in our nation as exemplified by Barack Hussein Obama and expanded to protect his lawless lackeys as well.

Subsequently most are aware of the report circulating that officer Wilson has since tendered his resignation due to death threats being made by these peaceful protesters and that his wife, also an active duty Ferguson police officer, is rumored to be under pressure to resign as well. In Wilson’s resignation letter, he cites these threats specifically:

~“I, Darren Wilson, hereby resign my commission as a police officer with the City of Ferguson effective immediately. I have been told that my continued employment may put the residents and police officers of the City of Ferguson at risk, which is a circumstance that I cannot allow. For obvious reasons, I wanted to wait until the grand jury made their decision before I officially made my decision to resign. It was my hope to continue in police work, but the safety of other police officers and the community are of paramount importance to me. It is my hope that my resignation will allow the community to heal. I would like to thank all of my supporters and fellow officers throughout this process.”~

Never mind I guess those actual lawbreakers responsible for all the diverse criminal activity and carnage that jeopardized lives and burnt dozens of Ferguson businesses to the ground now apparently getting to dictate the law. Diction which guarantees their demands being met in the ruination of peoples lives whose only guilt is that of doing their jobs upon the threat of more violence and wanton demolition if these extremists don’t get their way. How much more backwards can this get??? Given this caravan of perpetrators and their procession of chronic violations, I can’t help wondering how much longer it’ll be before we start seeing stories crop up in headlines about juror members of the Ferguson grand jury having become targets for these racial jihadists. As this regimes conspiratorial colluders in the liberal media reveal their names and addresses to the angry masses just as they did to officer Wilson. More lives destroyed to stoke their vengeful fires with, feeding their own meager vindictiveness. Honestly, I’m surprised this hasn’t happened yet.

Even worse is how this insurgent coup d’état of racist recusants show no signs of dissipating any time soon. As evidenced by the many successive reports of their ongoing siege in the intervening days since the release of the grand juries controversial decision. Reports indicating many of these agitators as hailing from as far away as New York and being seen waving around communist flags. Other reports detailing the propensity for mobs burning American flags in the streets…Again. A peaceful protest leader calling for violence outright in their advocating the shooting of police officers. The terrorizing of a Christmas choir of children to the point of reducing them to tears. We also have the 2 Black Panther members arrested when their efforts to purchase explosives to make and detonate pipe bombs during Ferguson demonstrations was derailed. Apparently their EBT cards lacked sufficient funds to cover this transaction. Yet the most heinous act to be committed so far to date came with the recently vicious South St. Louis murder of 32 year old Bosnian immigrant Zemir Begic. Begic was bludgeoned to death by 2 hammer wielding black teens and a Mexican youth after alleged chants of “fuck the white people”, “kill the white people” by these upstanding peaceful citizens.

When analyzing this kaleidoscope of schizophrenic details and events since the day Michael Brown was put down throughout the intervening months leading up to now, there’s just no sense to be made for why this protracted catastrophe has been tolerated to get away with so much violence and collateral damage for as long as it has. Especially when as soon as these peaceful protesters made the willful decision to endanger lives in this St. Louis suburb they should have automatically been dispatched with extreme prejudice by law enforcement. Not because they’re black, but because their actions deserved it. The only conclusion that does make sense is if you consider the prospect that this whole ordeal was hijacked in its infancy, manufactured and molded into the crisis it has been made to grow into and resemble given what we know of Obama’s guiding philosophy of never letting a good crisis go to waste. Even if it involves him making furtive arrangements through vicarious agents such as Al Sharpton who earns his living by publicly inciting and promoting racial animus and civil unrest. Dividing people based on color is, after all, his bread and butter. 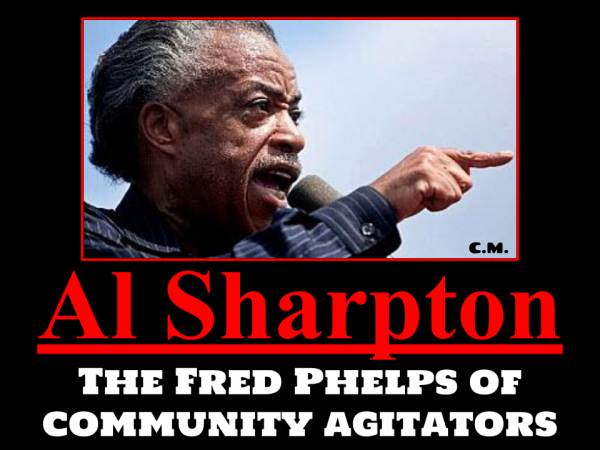 Al Sharpton. Just attaching the appellation of Reverend in front of that impenitent hate mongers name is a blasphemy against God. I think Sharpton’s about as much of a Reverend as I believe these Ferguson militants are peaceful protesters.

Is this the destination Obama envisioned and was intending when he held a hushed meeting at the White House with these flakes in the early days of November prior to the grand juries decision? When he told them to “Stay on course“? It’s my belief that’s precisely the reason why there’s no solution to Ferguson imminent. It’s only a portent of even more things to come in reaching their fruition towards Obama’s planned “fundamental transformation” during the next 2 years.

The only way I can see any sort of an end at this rate to these escalating affairs is for law enforcement to just start doing their damn job and kill every one of these terrorist sons of bitches. 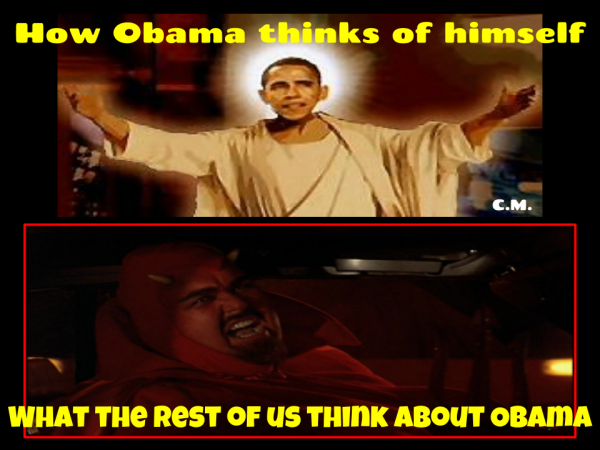