Did you know that the rate of suicide is highest during this time of the year and that 45 percent of all Americans dread the Christmas season?  We are constantly being told that Christmas is the happiest time of the year, but mental health professionals tell us that the exact opposite is true.  For large numbers of Americans, the period between Thanksgiving and Christmas is filled with stress, anxiety, loneliness and family squabbles.  And for most people, the reality of the holidays never even comes close to matching up with the glittering ideal portrayed in movies and on television.  As a result, depression tends to spike during the month of December.  And of course Americans are quite depressed most of the time anyway.  In fact, one out of every ten Americans is on an antidepressant as you read this article.  No other nation in the world even approaches that level.  So right now we are in the midst of the most depressing time of the year in the most depressed nation on the entire planet.  What is wrong with this picture?

A lot of people start to feel down this time of the year, and they don’t realize that there are millions of others that are going through the exact same thing.  The following excerpt from a Psychology Today article explains that this is something that happens every Christmas season…

So when we get depressed, what do we do?

Well, we do what we always do for depression.

Today, America is the most drugged up nation on the face of the Earth by a wide margin.  Just consider the following numbers…

–According to the New York Times, more than 30 million Americans are currently taking antidepressants.

-The number of people that are clinically diagnosed with depression is growing at a rate of 20 percent annually.

–The rate of antidepressant use among middle aged women is far higher than for the population as a whole.  It is hard to believe, but right now one out of every four women in their 40s and 50s is taking an antidepressant medication.

-The percentage of women taking antidepressants in the United States is significantly higher than in any other country in the world.

-Children in the United States are three times more likely to be prescribed antidepressants than children in Europe are.

Sadly, most Americans have absolutely no idea that the latest scientific studies indicate that many of these drugs could actually be quite dangerous.

For example, one recent study found that children that take antidepressants are more likely to attempt suicide…

High doses of brain-altering chemicals marketed as “anti-depressants” increase the likelihood of self-harm, rather than decreasing the risk, say Harvard health scientists in a study that analyzed data on 162,625 people.

Drugs known as selective serotonin reuptake inhibitors (SSRI’s) may raise the risk of suicidal behavior in children and young adults, according to the analysis. SSRI’s are the chemical substances which make up the antidepressants Prozac and Zoloft.

Almost one in five children born to mothers taking antidepressants during pregnancy have a brain defect – called a “Chiari type 1 malformation” – according to a groundbreaking study by researchers at the University of North Carolina at Chapel Hill.

The study, titled Rate of Chiari I Malformation in Children of Mothers with Depression with and without Prenatal SSRI Exposure, was published May 19 in the peer-reviewed journal Neuropsychopharmacology.

The researchers found that “children of depressed mothers treated with a group of antidepressants called selective serotonin reuptake inhibitors (SSRIs) during pregnancy were more likely to develop Chiari type 1 malformations than were children of mothers with no history of depression,” according to their press statement.

Perhaps popping pills is not the solution after all.

If you are battling depression, one of the key things to do is to look at your diet.  What we eat and what we drink plays a massive role in how we feel and how our brain functions.  If you start eating better, your life will improve in a multitude of ways.

And certainly there are natural ways to battle depression.  If you want to learn more about this, Natural News has some great articles on the subject.

But more important than all of those things is the fact that most Americans today simply do not have anything to live for.

These days, most people just seem to be living for themselves.  They chase one form of entertainment after another, hoping that something will eventually fill the gaping holes that are constantly aching inside their hearts.  Many go to their graves never finding the fulfillment that they were desperately searching for all of their lives.

You have got to have something to live for that really matters.  That is something that I have found, and it has made all the difference.  No matter how broken your life is right now, the key is to never, ever, ever give up.  As long as you keep fighting, there is always hope that things can be turned around.

So don’t give in to depression this Christmas season.

Yes, this world is an incredibly messed up place.

Yes, things are going to get a lot worse in the years ahead.

But that doesn’t mean that the future has to be bleak for you.

The best chapters of your life could be right around the corner, so don’t you ever, ever give up. 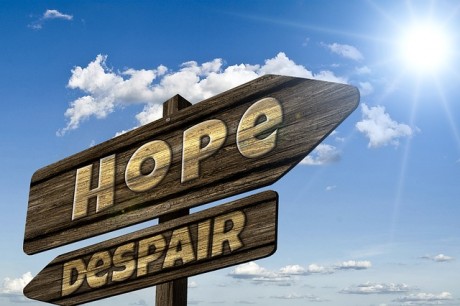