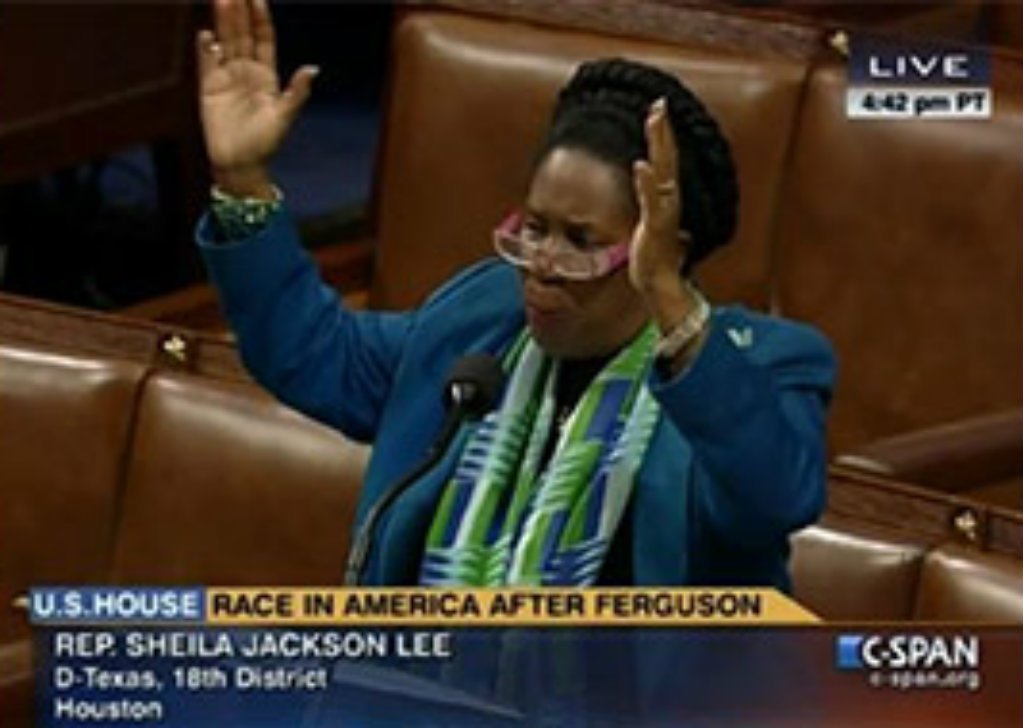 Check out what these bought-and-paid-for members of Congress are doing on the House floor (instead of their jobs): 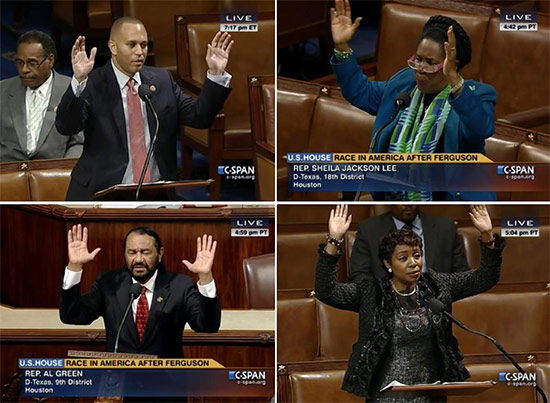 But we’ll get back to that in just a moment…

For months now, The Daily Sheeple and other alternative media outlets have been reporting on the highly provocateured mess that has been going down in Ferguson following the Michael Brown shooting and the resultant Darren Wilson grand jury decision.

We’ve shown that the protests have been highly organized, trained for and likely highly funded. That Obama ended his vacation early specifically to discuss Michael Brown’s shooting with AG Eric Holder, then a week before the grand jury decision, the president called members of every major civil rights group in the country personally to discuss Ferguson. That the DOJ even sent marshals to “coach” Ferguson protesters.

We’ve also shown that police kill lots of people who were totally innocent in every respect, and in too many of those cases to count, the government and mainstream media are silent and fail to drive the country into a complete frenzy over it that would result in riots no matter the outcome.

We’ve shown that the system seemingly placed its chess pieces on the board to foment more violence out of this situation, not less.

We’ve shown that when it comes to the Michael Brown shooting fallout, predictive programming totally works because it totally did.

The dog has officially been wagged in Ferguson, Missouri. There are daytime soap operas less scripted than this.

In reality, all the citizens of this country should be outraged at the militarized police state growing all around us as it has been for decades now.

Yesterday I wrote a story about how even some school districts in this country are being given MRAP tanks from the Pentagon’s surplus program that seeks to put military equipment meant for far away battlefields directly onto the streets of Hometown, USA. Hardly anyone read it because apparently schools having their own police departments and tanks in this country is just par for the course anymore.

The focus (read: government and media resources) here has been placed on the Michael Brown case just like it was with the Trayvon Martin case specifically to cause division and keep people fighting amongst themselves. They chose a case with lots of gray areas that would cause people to take sides, instead of the plethora of black-and-white cases of police killing totally innocent people without any cause whatsoever where everyone can agree the police state is out of control.

Once the last building is burned to the ground in Ferguson and the last provocateur gets arrested, you’ll see. More power will ultimately be shifted to the system’s ever-burgeoning police state — the very thing these protesters, rioters and looters were supposedly acting out against in the first place.

Now back to Congresspeople using their positions to incite more anger and division and essentially to race bait on the House floor.

How many cases of police brutality and the deaths of innocent people at the hands of cops aren’t treated this way by our elected officials?

Did you see that one time when Congress members made an obvious gesture to reference the choking death of a man with Down Syndrome simply because he refused to leave a movie theater after his movie was over? Or when Congress made gestures regarding Kelly Thomas, a schizophrenic homeless man who was beaten into a coma by cops for no reason and later died choking on his own blood? When reps made physical motions to openly reference that one time that SWAT team accidentally went to the wrong house during a no-knock raid and blew the brains out of a seven-year-old little girl?

No, you didn’t because it never happened.

The only other time in recent memory an open, personalized display in Congress like this has happened was during another highly provocateured case the government and media tried to provoke into what we are seeing in Ferguson today: the Trayvon Martin case. 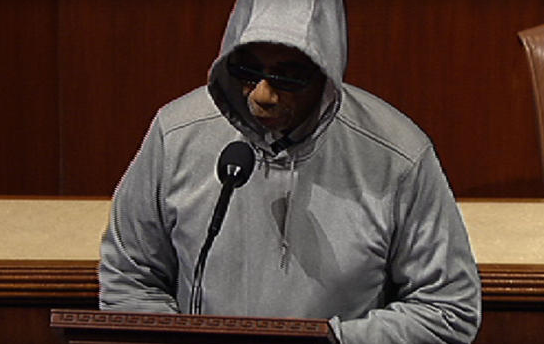 That’s Rep. Bobby Rush wearing a hoodie in a timely gesture to express solidarity with Trayvon Martin on the House floor, once again officially and pointedly bringing government into what was already being provoked in the 24/7 news media into a very heated, racially tense situation for one individual, again in a case with gray areas to divide people. Rep. Rush was escorted from the floor for doing it, too.

Did you know there was even a reverse Trayvon/Zimmerman acquittal case back in 2009 that was completely ignored by the government and media?

Spotlighted cases like Michael Brown and Trayvon Martin which get hammered in the 24/7 cycle (and thus, the nation’s collective consciousness) are cherry picked for a purpose. Maybe the Trayvon case was simply a practice run for Ferguson. Either way, this time it worked.

As Ferguson continues to find ways to dominate the mainstream news media (instead of, oh, I dunno, the fact that the government is openly stoking World War III with Russia over oil as we speak), the more contrived and fake the entire thing seems.

Ferguson. It’s all smoke and mirrors to divide us, conquer us and control us.