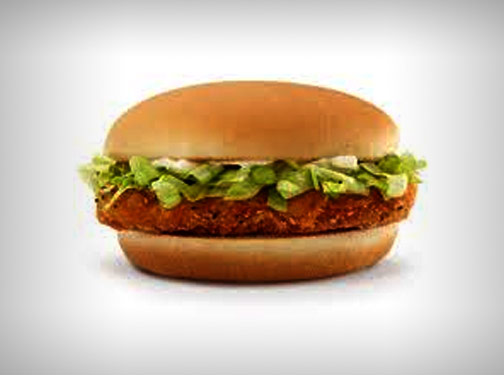 Des Moines police recently arrested Hill for simple domestic assault after “reportedly using a McDonald’s McChicken sandwich as a weapon against his pregnant wife” because “he doesn’t like them.”

When the cops showed up at his house, Hill’s wife reportedly had mayonnaise on her face and shirt, and Hill admitted he had thrown the sandwich at her after she woke him up with it around 1 p.m. and an argument ensued.

His wife claimed Hill smashed the bun in her face. She had gone to the bathroom to clean herself up, but Hill followed her, antagonizing her and recording her with his cell phone which she later knocked out of his hands.

According to The Des Moines Register, “Police noted that the woman’s nose was swollen and believed Hill was trying to entice the woman into knocking the phone out of his hands to make her appear aggressive, the report stated. Hill was arrested and his weapons permit was confiscated.”

The McDonald’s McChicken… The preferred weapon of choice!

If this sounds like a ridiculous argument between a young married couple that maybe just got a little out of hand, that’s because it probably was. Was Hill’s wife truly “assaulted” with the McChicken sandwich? Maybe in a technical sense.

But on the only serious note you can find here, it’s that last line that stood out in the article and made this whole thing worth mentioning.

Hill threw a McChicken sandwich at his wife and had his weapons permit confiscated over it.

While many laws do exist in regards to domestic assault and limiting an aggressor’s access to firearms (and thus his ability to potentially shoot his significant other), this is a pretty clear indication that even laws which may have good intentions end up on the slippery slope to rights abuses.

It’s as if police in this country will find basically any reason to take away someone’s guns or access to them… Meanwhile, citizens die at the hands of cops all the time and those guys hardly ever even lose their jobs over it. Take a look at the Eric Garner case, where a man was choked to death by an officer the grand jury has failed to indict, simply because Garner was selling untaxed cigarettes on the street.

The whole thing may sound utterly ridiculous (because it is), but you might want to think about it next time you get mad enough to throw something.