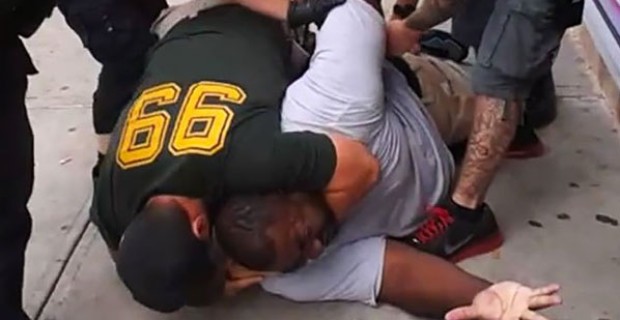 Some police officers responded to the grand jury decision not to indict Daniel Pantaleo for the choking death of Eric Garner by celebrating the fact that they would now be given free reign to “kick some thug ass,” seemingly ignorant of the fact that Garner’s crime was nothing more than selling untaxed cigarettes.

Comments collected from the PoliceOne.com website in response to the verdict by The Free Thought Project’s Matt Agorist provide a shocking insight into the attitude of cops to the very real problem of police brutality.

The website’s comment policy demands that respondents “must be a verified law enforcement professional,” meaning that most if not all of the remarks were made by actual police officers.

The comments express the view that Garner was resisting arrest and did not “submit” quickly enough, that he died of a pre-existing condition (despite The New York City Medical Examiner’s office stating otherwise), and that the decision now means police are free to “kick some thug ass,” despite the fact that Garner’s crime was merely to flout New York’s draconian cigarette tax law.

Another respondent remarks that Garner’s death pales in comparison to a cop’s “right to protect ourselves” and “serve the people”. Quite how Pantaleo was protecting himself while choking Garner is unexplained. Whether enforcing cigarette taxes via summary execution really ‘serves the people’ in any way is also up for debate.

“With cops dehumanizing people in this manner, is it any wonder that they resort to deadly force so quickly?” asks Agorist.

“What none of these law enforcement officers seem to grasp is the fact that they can apply a certain level of discretion. You do not have to immediately escalate an otherwise completely peaceful situation into a violent one. Was the state’s missing revenue from a man selling cigarettes worth more than the life of another human being?”

The comments by these police officers once again serve to highlight the fact that police brutality has become normalized within many police departments across the country.

Instead of focusing on de-escalating situations, officers are being trained to immediately resort to violence. The fact that the vast majority of cops are then not indicted or acquitted after a trial, such as in the horrific beating death of Kelly Thomas, gives police officers the confidence that they can treat the general public like animals and in some cases literally get away with murder.