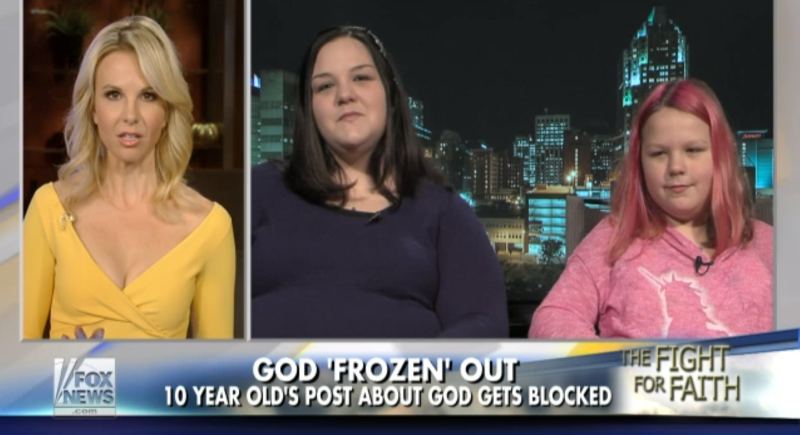 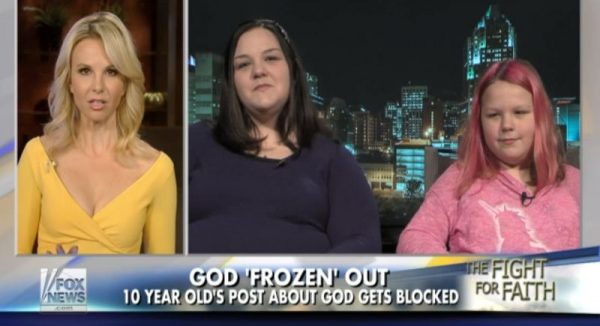 Clearly the Disney of today is a far cry from what Walt Disney had in mind for his company. Not only have there been questionable content put out, but also the culture has seen the immoral results of some of the “Disney kids” of today. Now a 10-year-old girl from Angier, North Carolina has come out to expose that the Disney Channel’s website won’t allow her to voice her thankfulness to God.

Lilly Anderson wanted to express her thankfulness in response to a Disney Channel question.

She wrote that she was thankful for, “God, my family, my church and my friends.” Those are all good things to be thankful for, but when she hit enter to compete her comment, she received a message that indicated “God” was not a nice word to use and was encouraged to “Please be nice.” Lilly’s mother, Julie, spoke with Fox News’ Todd Starnes. “It was Lilly’s idea alone to include God in her post,” Julie told me. “As a matter of fact she was in another room from me and she came and got me when it wouldn’t allow her to post.” Starnes then reached out to Disney for an explanation. At the time of the original writing of his article, Disney didn’t know why the word “God” would be an issue and was not intentionally blocked from the website. However, in an update from Starnes, he reported:

After the following column appeared on FoxNews.com, Disney issued the following statement on Tuesday, December 2: “Disney employs word filtering technology to prevent profanity from appearing on our websites. Unfortunately, because so many people attempt to abuse the system and use the word “God” in conjunction with profanity, in an abundance of caution our system is forced to catch and prevent any use of the word on our websites. The company would have been happy to explain our filtering technology to the inquiring family had they contacted us.”

As one that operates a new and politics website, I do understand the need to filter for spam, trolls and certain words that are obscene to attempt to keep the conversation open to all audience ages. While Disney claims they were attempting to keep the word “God” from being abused, it is in stark contrast to their first claim that the word was not intentionally blocked. Clearly, it was. Also, they don’t seem willing to remove the word “God” from their filtered list. However, I thought it pertinent to provide these words I discovered from Walt Disney on Faith, Church, Bible Study, Prayer & God.

In these days of world tensions, when the faith of men is being tested as never before, I am personally thankful that my parents taught me at a very early age to have a strong personal belief and reliance in the power of prayer for Divine inspiration. My people were members of the Congregational Church in our home town of Marceline, Missouri. It was there where I was first taught the efficacy of religion … how it helps us immeasurably to meet the trial and stress of life and keeps us attuned to the Divine inspiration. Later in DeMolay, I learned to believe in the basic principle of the right of man to exercise his faith and thoughts as he chooses. In DeMolay, we believe in a supreme being, in the fellowship of man, and the sanctity of the home. DeMolay stands for all that is good for the family and for our country. Every person has his own ideas of the act of praying for God’s guidance, tolerance, and mercy to fulfill his duties and responsibilities. My own concept of prayer is not as a plea for special favors nor as a quick palliation for wrongs knowingly committed. A prayer, it seems to me, implies a promise as well as a request; at the highest level, prayer not only is a supplication for strength and guidance, but also becomes an affirmation of life and thus a reverent praise of God.

Deeds rather than words express my concept of the part religion should play in everyday life. I have watched constantly that in our movie work the highest moral and spiritual standards are upheld, whether it deals with fable or with stories of living action. This religious concern for the form and content of our films goes back 40 years to the rugged financial period in Kansas City when I was struggling to establish a film company and produce animated fairy tales. Many times during those difficult years, even as we turned out Alice in Cartoonland and later in Hollywood the first Mickey Mouse, we were under pressure to sell out or debase the subject matter or go “commercial” in one way or another. But we stuck it out — my brother Roy and other loyal associates — until the success of Mickey Mouse and Silly Symphonies finally put us in the black. Similarly, when war came to the United States in 1941, we turned from profitable popular movie-making to military production for Uncle Sam. Ninety-four per cent of the Disney facilities in Hollywood became engaged in special government work, while the remainder was devoted to the creation of morale building comedy, short subjects.

Both my study of Scripture and my career in entertaining children have taught me to cherish them. But I don’t believe in playing down to children, either in life or in motion pictures. I didn’t treat my own youngsters like fragile flowers, and I think no parent should.

Children are people, and they should have to reach to learn about things, to understand things, just as adults have to reach if they want to grow in mental stature. Life is composed of lights and shadows, and we would be untruthful, insincere, and saccharine if we tried to pretend there were no shadows. Most things are good, and they are the strongest things; but there are evil things too, and you are not doing a child a favor by trying to shield him from reality. The important thing is to teach a child that good can always triumph over evil, and that is what our pictures attempt to do.

The American child is a highly intelligent human being — characteristically sensitive, humorous, open-minded, eager to learn, and has a strong sense of excitement, energy, and healthy curiosity about the world in which he lives. Lucky indeed is the grown-up who manages to carry these same characteristics into adult life. It usually makes for a happy and successful individual. In our full-length cartoon features, as well as in our live action productions, we have tried to convey in story and song those virtues that make both children and adults attractive. I have long felt that the way to keep children out of trouble is to keep them interested in things. Lecturing to children is no answer to delinquency. Preaching won’t keep youngsters out of trouble, but keeping their minds occupied will.

Thus, whatever success I have had in bringing clean, informative entertainment to people of all ages, I attribute in great part to my Congregational upbringing and my lifelong habit of prayer. To me, today, at age sixty-one, all prayer, by the humble or highly placed, has one thing in common: supplication for strength and inspiration to carry on the best human impulses which should bind us together for a better world. Without such inspiration, we would rapidly deteriorate and finally perish. But in our troubled time, the right of men to think and worship as their conscience dictates is being sorely pressed. We can retain these privileges only by being constantly on guard and fighting off any encroachment on these precepts. To retreat from any of the principles handed down by our forefathers, who shed their blood for the ideals we still embrace, would be a complete victory for those who would destroy liberty and justice for the individual.

People would do well to learn the teachings of Jesus Christ and obey them. Though I confess that I don’t know the intricacies of Disney’s theology, or even whether or not he was a believer in the Lord Jesus Christ, but he definitely had the idea of “Deeds rather than words” correct, just as James tells us:

What doth it profit, my brethren, though a man say he hath faith, and have not works? can faith save him?15If a brother or sister be naked, and destitute of daily food, 16And one of you say unto them, Depart in peace, be ye warmed and filled; notwithstanding ye give them not those things which are needful to the body; what doth it profit? 17Even so faith, if it hath not works, is dead, being alone.

18Yea, a man may say, Thou hast faith, and I have works: shew me thy faith without thy works, and I will shew thee my faith by my works. 19Thou believest that there is one God; thou doest well: the devils also believe, and tremble. 20But wilt thou know, O vain man, that faith without works is dead? 21Was not Abraham our father justified by works, when he had offered Isaac his son upon the altar? 22Seest thou how faith wrought with his works, and by works was faith made perfect? 23And the scripture was fulfilled which saith, Abraham believed God, and it was imputed unto him for righteousness: and he was called the Friend of God.24Ye see then how that by works a man is justified, and not by faith only. 25Likewise also was not Rahab the harlot justified by works, when she had received the messengers, and had sent them out another way? 26For as the body without the spirit is dead, so faith without works is dead also.

My guess is that Walt Disney would be rolling over in his grave if he knew what has become of the empire that bears his name, especially some of the more pagan practices promoted in some of the more modern cartoons like Pocahontas and others. They are a far cry from the previous works in the Disney legacy.