Many times in the past I have discussed the concept of what I call the “non-participation principle,” but often people misinterpret what “non-participation” really entails. Such a strategy does not mean an individual activist or group simply refuses to support the system by not using Federal Reserve notes, or not paying taxes, or not buying Monsanto-generated frankenfoods. That kind of thing is all well and good, but ultimately, non-participation means TAKING away power from the corrupt political and financial elite. Sometimes, this is done through force of arms — but not always in the way some might believe.

One-dimensional tactics are often more dangerous to the activist group fighting for freedom than they are for the power oligarchy, and I see them promoted all the time. How often have you heard some idiot (or paid provocateur) rambling about a march on Washington, D.C., to “arrest the criminals” (the criminals in D.C. are middlemen as replaceable as lawnmower parts, not that a blind march into the mouth of the beast would accomplish anything anyway). What about the insane and historically ill conceived option of military coup? What about random violence against random targets, forsaking the very principles by which our movement sustains itself? Even if a movement “wins” in such a way, it still loses after becoming the monster it sought to destroy.

How about the opposite end of the spectrum? People call on the liberty movement to buy useless, ethereal bitcoins, or chant slogans on street corners in docility while being doused with pepper spray. Activists regurgitate the “reach, teach, and inspire” mantra without acknowledging that concrete action and legitimate risk are often the MOST inspiring paths that can be undertaken. What about those people who actually argue that we need to “reason” with the psychopaths running our infrastructure and show them the error of their ways (which is much like trying to debate with a shark on why you are not as tasty as you appear)?

All of these tactics culminate in a zero-point game of make-believe revolution. They not only accomplish nothing, they actually distract the movement from pursuing more tangible and effective methods.

The non-participation principle could be summed up as follows:

Provide for yourself and others the necessities that the corrupt system cannot or will not. Remove your consent for the system to provide necessities for you when it suits them. Eventually, the elites of the system will have only one of two options: admit that you no longer need them and leave you in peace or try to physically stop you from taking care of yourself. If the system tries to stop you, it must expose itself as inherently despotic in the process and lose public support. In either case, you win.

It is vital that movement activists understand that our nation and perhaps the world have become targets of fourth-generation warfare leading to artificial division, conflict and very real self-destruction. If we are to respond, it must be with fourth-generation revolution. The methodology of the non-participation principle has been applied with great success in certain parts of the world, but most recently in Ferguson, Missouri, by the constitutional organization Oath Keepers and its Community Preparedness Team (CPT) program.

With very little initial press going in, Oath Keepers has broken through the mainstream barrier once again by using its CPT strategy in Ferguson, sending trained veterans and former police officers who have sworn to uphold constitutional liberties to defend properties under threat of arson by looters, rioters and suspected federal provocateurs. All members were volunteers and were present at the behest of business owners.

While supporting the right of Americans to peacefully protest, it has become clear that elements outside of Ferguson are attempting to exploit the legitimate frustrations of the community there and wield the citizens as a weapon to further their own agendas. Ferguson has been used to promote false racial division and conflict, the deployment of militarized police to attack protesters while allowing looters to move unchecked, and the socialist concept that property is evil and that business owners (even small-business owners) are all contributors to state violence and are, thereby, culpable targets for reprisal.

A friend of mine recently fell into a debate with a man claiming that the Oath Keeper response was unacceptable because they are “all racist.” Of course, when one realizes that Oath Keepers was defending businesses owned by black and Chinese, as well as white, locals, the racism argument disintegrates. Ultimately, the critic relented, but ended his diatribe with these words: “Some things just need to burn.”

This appears to be a common theme among agitators in Ferguson, who desperately want “bloodshed” so that a chain of reactionary violence will erupt, as outlined in this Breitbart article.

This, of course, not only angered socialist/communist provocateurs on the ground in Ferguson, but also elements of the government.

While many local police and citizens seem to be thankful for the Oath Keeper presence, government response teams had other ideas. Oath Keepers on site reported suspicious activity at a nearby residence in which a team of three men appeared to be setting up a sniper position after exiting a silver suburban. At the same time, state police units had set up on a nearby roof and were aiming sniper rifles in their direction. Luckily, the team leader, Sam Andrews, had worked with the local police department before and maintained a friendly relationship with them. His call to police had an immediate response, and whatever the teams of men were planning had been thwarted by the appearance of official witnesses.

Immediately following what I suspect to be a bungled false flag attempt, Andrews was approached by a county officer who told him that business owners had complained and wanted the defense group to leave. This was found to be a lie, and the officer admitted that his chief was being pressured by the feds to get Oath Keepers out of the area.

After failing on multiple occasions to run off Oath Keepers, the St. Louis County police chief is now attempting to use a statute requiring security personnel to be licensed by the state. The statute, however, clearly applies only to PAID security personnel, not volunteers. So Oath Keepers is back again and refusing to comply with the order to disperse.

Other groups providing security, including a group of black volunteers defending a white-owned gas station out of respect for their former employer, have not been harassed by police.

Why are the state and federal governments so intent on getting rid of Oath Keeper volunteers whose only “crime” is to defend innocent people from harm? It’s probably because Oath Keepers is taking the concept of non-participation nationwide.

They want to create a false paradigm… They are presenting a false choice between lawlessness, looting, arson, assault, murder on the one side, unrestrained or a hyper-militarized police state on the other… They are failing to do the intelligent thing and protect businesses without trampling on rights.

All four businesses protected by Oath Keepers remain untouched by fire, including Natalie’s Cakes and More, a beauty supply store, a dentist’s office and a Chinese restaurant, even though all of them had been directly threatened at the beginning of the riots. Natalie’s Cakes and More had not only received threats of arson, but had also been damaged by looters before the arrival of Oath Keepers. Now, her business stands intact. 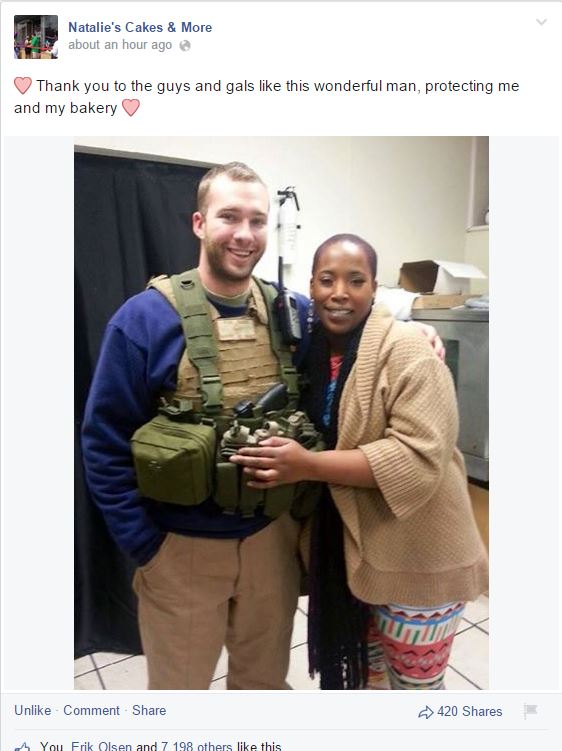 My regular readers are well aware that I have been involved in the formation and training of my local Montana CPT. I believe it is one of the best models of the non-participation principle in action today, combining elements of security and defense, emergency medical training, engineering for vital resources (farming, water, construction, etc.), as well as communication — everything that a community needs to protect itself or rebuild in the wake of disaster. The Ferguson event proves beyond a doubt that the CPT concept is effective and necessary.

The governor of Missouri, the federal government and some elements of the local police were either unable to come to the aid of citizens of Ferguson or they were unwilling. It is my belief that many buildings in Ferguson were simply allowed to burn in order to help perpetuate tensions and provide another rationale in the minds of Americans for militarization of law enforcement. If the system cannot or will not protect you, then you and your community will have to provide security for yourselves.

By extension, if the citizenry suffers extreme levels of conflict with city, state or federal-run law enforcement organizations, then they should be providing for the safety of their own community. If the police and the people cannot get along, then REMOVE the police from the picture entirely and create your own neighborhood watches and mutual aid groups. No city-paid police officer is going to care more about the safety of a neighborhood than the residents who live there and the businesses that survive there. And no violent criminal is going to be able to function for long in a neighborhood that is trained and armed to defend itself.

The best option, the only option when faced with a conundrum like Ferguson, is for residents to kick government out of the picture completely. Whatever problems might be encountered during such a transition would be a happy trade over the constant crisis wrought by political “mismanagement” or manipulation. In the end, corrupt government will never go away unless we stop handing our responsibilities over to them — and this includes security. We must stop trying to change the system by following the rules that perpetually benefit the system. If we are ever going to get rid of elitist control, we have to step outside the false paradigm and play our own game by our own rules.

You can learn more about Oath Keepers here.

REMINDER:  Alt-Market’s winter donation drive is now underway!  If you would like to support the publishing of articles like the one you have just read, visit our donations pagehere.  We greatly appreciate your patronage.