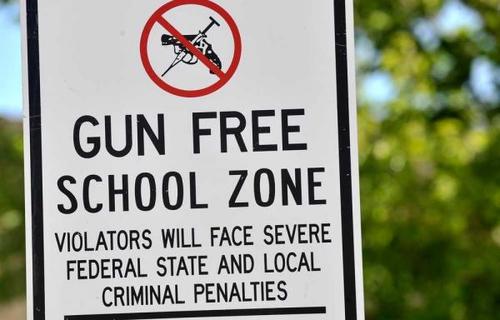 The latest example comes to us from the horrible shooting at Florida State University in Tallahassee, Florida.

A couple of weeks ago a gunman entered the library at FSU and shot three students before being gunned down by police himself. The FSU campus is a “gun free zone” where law-abiding gun owners are stripped of their right to carry. Of course, while law-abiding citizens leave their guns at home… criminals see no reason to obey the “gun free zone” signs and carry their firearms wherever they want. Which is EXACTLY what happened at FSU.

Nathan Scott is a concealed carry permit holder, as well as a concealed carry activist who is highly trained and has the necessary skills to carry his firearm. However, since he was on FSU’s campus, he was without the ability to defend himself. Also on scene was a US Army veteran with more than enough training to help combat the threat, but of course he too had been disarmed by the “gun free” signs.

See what happens folks? “Gun free” signs only take guns out of the hands of law-abiding citizens, not criminals looking to commit violent acts.

“The events of the last week in Tallahassee make plainly clear that it is unacceptable for responsible students who have gone to training, had extensive background checks, had their fingerprints taken, are of legal age, and are licensed by the state to be prevented from carrying their self-defense weapons on campus,” reads a release from Students for Concealed Carry at FSU, of which Scott is a member.

“The way the laws are now, violent criminals know that they have a window where they can act with impunity before police arrive on scene,” Erek Culbreath told Guns.com Wednesday. “This window varies, but as we have seen across the nation, in a student packed setting like a library the results can be unimaginably devastating. I am tired of seeing fellow students get shot at and having to flee for their lives when they know that if this shooting happened across the street off campus they would have the ability to have a fighting chance. Everyone deserves that chance, students are no exception.”

When will we stop the insanity of these gun-free zones? Every major shooting of the last 20 years has happened in gun free zones – schools, malls, movie theaters, etc. These shooters are ALWAYS cowards, they choose “soft” targets where the likelihood of meeting force is not high. It’s in our own best interests to stop the madness and let our law abiding gun owners carry their firearms wherever they go. Wherever.