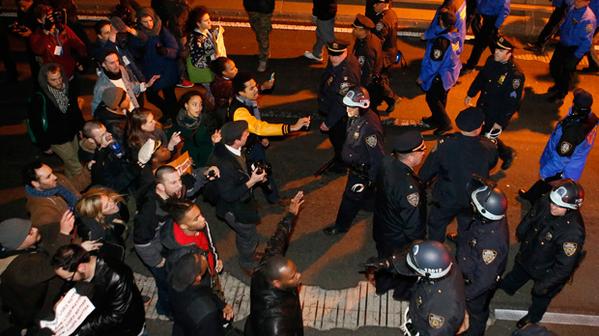 Tackled and ultimately choked to death by police, Eric Garner begged for air in his final moments. “I can’t breathe,” the 43 year old man stopped by police for selling “loose” untaxed cigarettes said repeatedly in his last words while alive.

The slogan was used on the streets by massive protests in New York following the grand jury decision not to indict NYPD Officer Daniel Pantaleo for his death, ruled a homicide by a coroner.

Ultimately, the rather clear case of excessive force and abuse of power by police – who were after Garner on a tax matter – will be mixed up in the larger national wave of increasingly racially divided politics.

The controversial decision comes only a week after the grand jury decision in the Michael Brown case, which led to riots, outrage and a media storm in Ferguson and beyond. However, the Brown case was much less clear cut, while video makes clear that Eric Garner was a victim who didn’t not deserve death. He did not resist arrest, and his alleged crime was too petty to cost him his life:

Broadcast and cable news outlets once again made spectacle out of the reaction to the grand jury decision in a high profile case with underlined and highlighted racial overtones. They featured protesting crowds carrying signs with messages like “Black Lives Matter,” as well as plenty of individuals from the black community.

The widow of Eric Garner appeared with Rev. Al Sharpton, making the larger focus on race – not just Garner’s particular case – all too clear. Mrs. Esaw Garner reacted to an apology issued by Pantaleo, who stated:

I became a police officer to help people and to protect those who can’t protect themselves. It is never my intention to harm anyone and I feel very bad about the death of Mr. Garner. My family and I include him and his family in our prayers and I hope that they will accept my personal condolences for their loss.

Of course, Pantaleo’s lawyer and the police union backing him blamed Garner’s death on his poor health, which included asthma, obesity and high blood pressure, while side-stepping the culpability of excessive force.

Mrs. Garner defiantly did not accept the apology, instead pursuing a lawsuit and civil rights violation claim:

Appearing with the Rev. Al Sharpton in Harlem, Mr. Garner’s widow, Esaw Garner, said she did not accept the officer’s apology.

“Hell, no,” Ms. Garner said. “The time for remorse for the death of my husband was when he was yelling to breathe.”

She said that while she mourned, the officer could go home to his family.

“He’s still feeding his kids,” she said, “and my husband is six feet under and I’m looking for a way to feed my kids now.”

While there is clear injustice in the tragic and unnecessary death of Eric Garner, there are obvious larger designs at play, and Garner will be used to that end.

The Department of Justice, now working in tag-team fashion with Attorney General Eric Holder and his replacement Loretta Lynch, slated to become the first female black Attorney General, is seeking to file a civil rights case in the matters of both Garner and Brown.

Attorney General Eric Holder said Wednesday night that the Justice Department will review all the evidence from the city’s investigation and will conduct its own civil rights probe into the death.

New York City Mayor Bill de Blasio said at an evening news conference in Staten Island that Holder and U.S. Attorney Loretta Lynch told him the investigation would be “done with a clear sense of independence” and that it would be “thorough.”

President Obama, who weighed in on the Ferguson decision last week against a backdrop of ensuing violence and rage, has also already spoken about the Garner decision:

In Washington, President Obama alluded to the Garner case as he spoke to a Tribal Nations Conference. He said he had been briefed by Attorney General Eric Holder and reiterated his administration’s commitment to strengthening the relationship between communities and police.

Post-grand jury Ferguson is now amplified by post-grand jury New York, with a larger narrative scripted mostly in Washington still playing out. Whatever happens next, this isn’t going away.