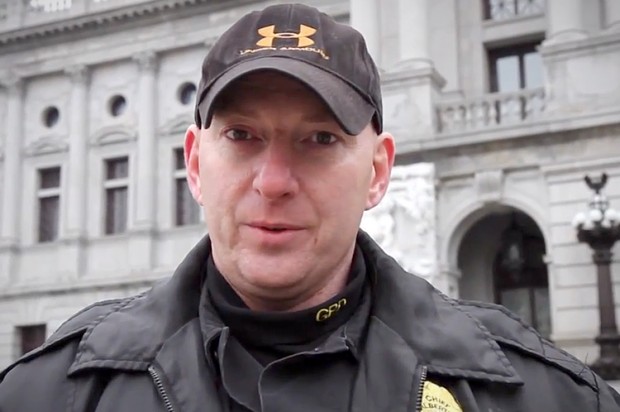 Any 2nd Amendment supporter will know and remember Mark Kessler by his videos. He is a no-holds barred and highly controversial figure, consistently calling out the left and leaving no doubt about where he stands on issues of the second amendment.

Videos like the above eventually cost Chief Kessler his job.

David Simpson reported for CNN in September of 2013:

Mark Kessler, the small-town Pennsylvania police chief who posted videos of himself firing automatic weapons while cursing about gun control, has been given a termination notice.

And so Chief Mark Kessler seemed to vanish into the night, likely to be unheard from again.

That is, until now.

I was sent out for, well I can’t really say exactly who but, I was sent out by agencies to go out and attract and investigate, whatever I can do to find out who’s who and what’s what among these groups. When I say groups, I’m talking about Second Amendment groups, patriot groups, alleged patriot groups, militia groups.

Below is a video and partial transcript, courtesy of our friends at Birther Report:

**********
KESSLER: I signed up with those agencies, several different agencies and began an operation where I was just a magnet. I was sent out there to attract the worst of the worst and frankly it worked.

COLMES: You were sent out by whom?

KESSLER: I was sent out for, well I can’t really say exactly who but, I was sent out by agencies to go out and attract and investigate, whatever I can do to find out who’s who and what’s what among these groups. When I say groups, I’m talking about Second Amendment groups, patriot groups, alleged patriot groups, militia groups.

COLMES: Were you not working for the police department of Gilberton PA?

KESSLER: No I wasn’t

COLMES: Were you working for the federal government?

**********
KESSLER: I couldn’t tell anybody. I just couldn’t, it was complete deniability. I could not say a word to anyone about the operation. So again it was bigger than me. I’d seen an opportunity to advance my law enforcement career, and there was no way I was going to turn it down.

COLMES: Is this the first time you revealed this?

COLMES: Were you promised a job by somebody in the federal government to do this?

KESSLER: No, it was volunteer work.

COLMES: What was in it for you?

KESSLER: I got to save a lot of lives, I can tell you that.

COLMES: Can you name any of the groups you took down?

KESSLER: The Triple X Minutemen is one group.

COLMES: Who are they?

KESSLER: They are from the Georgia area, and they were planning to blow up a federal building.

COLMES: Any other groups you can cite that you took down?

KESSLER: We took some lone wolves down in Texas that were militia guys, I should’t say militia, they were wanna be terrorists.

To be fair, Kessler claims that he was working with the government to bring down terrorist elements and there is no doubt that the overwhelming majority of second amendment supporters do not fit that profile, however…

Allow me to remind our readers that Cliven Bundy supporters were unfairly labeled as terrorists.

Mark Kessler is just the latest reminder that we can not trust any high-profile individual who claims to be on the side of liberty.

As I noted earlier this week, the government is all about gathering data of dissidents. When we follow high-profile figures, comment on their statuses, sign their petitions, and volunteer our identities to them, we might also be volunteering that same information to the federal government.

That information can and will be used against us at a later time. We can count on it.

In the end we can only trust ourselves.

Be careful out there.