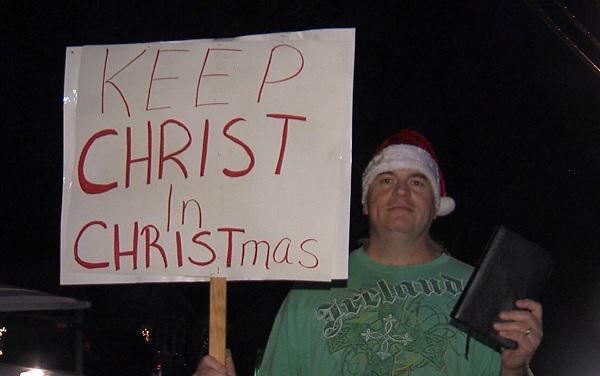 Piedmont, Alabama officials wanted to use the theme “Keep Christ in Christmas” in their annual holiday parade, but it seems that the anti-theists bullied the mayor into forfeiting that theme. However, that didn’t stop residents from poking their fingers in the eyes of the anti-theist group.

“It was a great theme,” Mayor of Piedmont Bill Baker said. “I was totally shocked when I received the letter. It’s a small town. It’s a small Christmas parade. We didn’t think there would be any problems at all.”

Apparently, FFRF had already been bullying the city’s high school, demanding they stop praying before football games. While the mayor and the people ignored the FFRF and recited the Lord’s model prayer one week, the city attorney claimed that the parade’s theme violated the law and so the mayor capitulated.

Once again, the anti-theist organization, Freedom From Religion Foundation, wrote another letter on behalf of one anonymous person to the mayor. The letter, signed by Staff Attorney Andrew L. Seidel, read that the purpose of FFRF is to “protect the constitutional principle of separation between state and church.”

The letter then goes on to state erroneously, “The City’s coordination of this religious event poses serious constitutional separation of state and church concerns. The Establishment Clause of the First Amendment to the United States Constitution prohibits the government from endorsing, advancing or promoting religion.”

First of all, if Mr. Seidel was honest, he would note that the First Amendment to the US Constitution limits the federal Congress, not a town mayor. “Congress shall make no law…” is how the First Amendment begins, not “The Mayor of Piedmont, Alabama shall not…”

The entire twisted thinking of the FFRF is corrupt at its root as there is no separation of church and state in the manner in which Seidel is arguing. For more on that subject, just read the letter from the Danbury Baptists to Thomas Jefferson concerning the issue of church and state and then read Jefferson’s response.

Seidel went on to call the city’s promotion of the theme of the parade “illegal” and “inappropriate.” He said it advocates observing Christianity and praying and “sends the message that the City not only prefers religion over non-religion, but also Christianity over all other faiths” and “alienates non-Christians.”

Well, Mr. Seidel that is the message that should be given! Piedmont does prefer one religion over the other. They do prefer Christianity over Islam, Buddhism, and even over anti-theism, which is also a religion.

Many of the participants of the parade have already paid their entry fees and were going to march with signs stating “Let’s Keep Christ in Christmas.”

While Mayor Baker is referred to as a “kind-hearted fellow” and “not one to be trifled with,” he wasn’t pleased with the FFRF. He also said residents were keeping the parade’s theme alive.

“It annoys me that a small group of people can do what they do and get away with it and the majority has to suffer,” the mayor said. “They are infringing on my beliefs.”

Baker said he viewed the controversy as a “blessing in disguise” and saw the rallying of support for him via Facebook and telephone as “heartwarming.”

Here’s the thing, while Mayor Baker submitted to claims that the city’s parade theme was illegal, nothing could be further from the truth. While I applaud the residents for stepping up and giving a poke at the anti-theists, the mayor should have stood his ground and ignored the FFRF. He was right when he said the FFRF were “infringing on (his) beliefs.” They are.

The First Amendment is to restrain Congress, not the states and certainly not mayors or cities. I think it’s time we get some mayors who will bloody the noses of the anti-theists and stand up for what is right rather than submit to absolute non-sense.

I also suggest that Mayor Barker get rid of his city attorney and seek the counsel of attorneys at Liberty Counsel or Alliance Defending Freedom the next time the FFRF come calling.