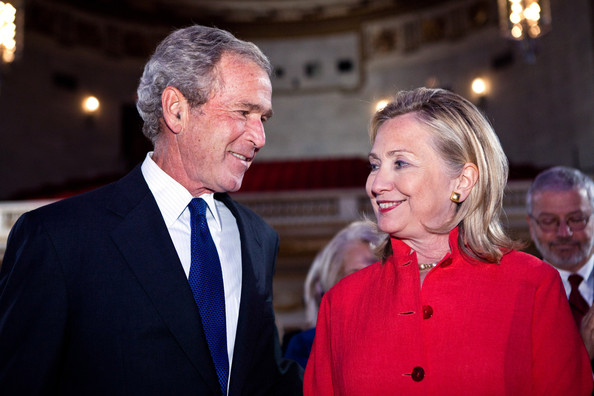 Underscoring frustrations expressed by many about the two party monopoly in America, during an interview with CNN’s Candy Crowley yesterday, George W. Bush responded to a question about his brother Jeb running against Hillary Clinton by referring to Hillary as his “sister in law”.

Noting how Bush referred to Bill Clinton as his “brother from another mother,” Crowley asked the former President, “what does that make Hillary Clinton to the Bush family?”

“My sister in law,” responded Bush.

Bush agreed that Hillary would be “formidable” in a presidential run-off, but said he would be willing to bet that Jeb Bush would beat her if Hillary decided to throw her hat in the ring.

Bush’s comment serves as a reminder that the U.S. political system is becoming increasingly crony, with little difference between the leadership of both major parties or both candidates in a typical presidential election. Should Jeb Bush and Hillary Clinton be chosen as candidates, it will ensure that a Bush or a Clinton has been in the White House for four out of the last five presidencies.

“There is no difference in voting for Hilary or voting for Jeb … they are both liberal Democrats,” responded one YouTube user.

The relationship between the two families was perhaps best illustrated by last year’s Guccifer hack of the Bush family emails, which revealed that George W. Bush refers to Bill Clinton as “bubba” or “brother”.

“[H]e helped restore his sordid reputation. A very tough thing to do but with kindness, dad probably helped Bill Clinton than anything he himself has done,” said the former Florida Governor.