“Woo hoo! Time to par-tay!” said no sane American ever. 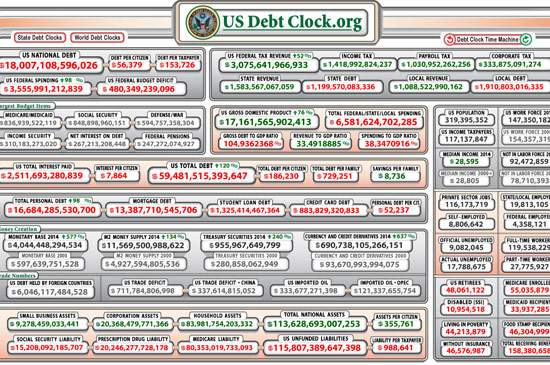 That means every time a baby is born in this country, his or her share of the debt would be over $56,000 before the poor little dear even opens his or her eyes all the way.

Keep that in mind when you read about how our government is set to pass another gigantic $1 trillion spending bill next week.

“The $1.014 trillion bill funding most of the government through September 2015 is one of the last trains out of the station, as the 113th Congress is set to close shop on Friday,” The Hill reported in a story about how watchdog groups are already calling the massive bill out for likely being chock full of nasty little riders that will open the door that much wider to special interests having even more control over the federal government (as if we aren’t admittedly an oligarchy at this point anyway).

“You have to not just be a speed-reader, but really be a superman to get through all of it,” Steve Ellis, vice president at Taxpayers for Common Sense told The Hill. “We’re ready to be surprised.” Gee. Sounds exciting, doesn’t it?

But the real question here is: does anyone really have half a clue what a number like $18 trillion even looks like?

This video by Demonocracy.info, a site that makes economic infographics — a video which gives me the chills every single time I watch it without fail — will give you an inkling…

It illustrates what $17 trillion dollars in $100 bills looks like. Note the Statue of Liberty there at the end…true-to-size.

Guess that’s just one more reason why some people have started calling America, “Land of the Fee, Home of the Slave.”