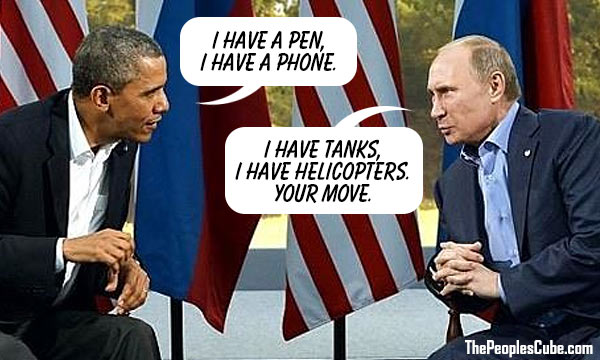 Does anyone really think that any nuclear-armed nation, whether it would be the United States, China and especially Russia will ever accept defeat to a rival nation, in conventional warfare, without subsequently inflicting the maximum penalty on its opponent? There is little question in most experts minds that the loser of a “conventional” World War III will not hesitate to unleash its nuclear weapons as a last ditch means to “even the score.”

Obama’s Complacency Is Our Number One National Security Concern

Forbes writer, James Conca, has expressed the view in a dramatic report that when it comes to matching the growing Russian military threat, that America’s most pressing concern is complacency. Conca noted that the recent reports that Russia has gained the upper hand in nuclear weapons capability against the United States, has been met with indifference from this administration.

Making matters worse, Conca observed that this current administration fired the one General who was going to shape up America’s Intercontinental Ballistic Missile command. Now he’s gone and our ICBM’s sit in less than a state of readiness.

Conca notes that even the U.S. State Department has acknowledged that not only has the the U.S. nuclear arsenal fallen behind Russia but so has basic U.S. military technology. The U.S. State Department admits that America is now the underdog should hostilities involving nuclear weapons between the two nations actually break out. Obama is out to lunch and seems oblivious to the threat. The Forbes investigation goes on to say that Russia is absolutely ready and their new long-range cruise missiles are ready for mobile deployment by land or sea.

Hagel Speaks Out and Gets Fired Defense Secretary, Chuck Hagel, is now gone from his position. Why? This is probably due to the fact that Defense Secretary Hagel stated that “routine neglect of our nuclear weapons programs over the years has compromised our ability to respond to an actual threat.” This is a clear indictment of the six year presidency of Obama and the fact that he’s done nothing to keep up with Putin. Shortly after this statement, Hagel was fired as Defense Secretary. Is there any doubt what team Obama is playing for?

Putin announced his warlike intentions, last month, in that he plans to severely scale down nuclear security cooperation with the United States. Translation, Russia does not need, nor want, the protection it formerly achieved through limitations on nuclear weapons.

This aggressive posture, according to The New York Times, is seen as Russia’s way of saying that it requires no outside assistance in securing the country’s nuclear assets and network.

Or as observers would say, it could be Moscow’s strong message to the West and the United States in particular that it cannot be pressured about Ukrainian borders, where Russian troops are amassing by the tens of thousands.

Mutually Assured Destruction Is a Thing of the Past Michael Snyder writing for The Right Side News exposed the fallacy that due to the outdated doctrine of  ”mutually assured destruction,” Russia is opposed even to a nuclear confrontation. In fact, Snyder demonstrated that the opposite is true. A nuclear confrontation is something that Putin may not desire, but he is not backing down. The following five developments have been identified which indicate that Russia is fully intending on winning World War III.

2. Russia has spent nearly $72 billion on arms in 2011 and is planning on spending well over a half a billion dollars to upgrade its weapons systems by 2016 including the development of the ability to cripple America with cyber attacks.

4. According to PRAVDA, Russia has 5,000 nuclear weapons of different tactical classes including Iskander warheads and torpedo, aerial and artillery warheads, all right next to Europe. The United States has reduced its nuclear arsenal from 31,000 (1967) to a mere 1,600. Obama has openly spoken of reducing our arsenal to 300 nuclear missiles.

5.  According to The Financial Times, satellite killers were launched into orbit May of 2014. This move by the Russians, parallels what the  Chinese have already accomplished and tested. The intent is to blind American forces on the battlefield and at sea.

6. Obama has continued to weaken U.S. nuclear forces through the removal Nineteen nuclear launch officers. This is not a scenario were the United States can simply say “next man up”. These are highly specialized positions requiring highly specialized training that can only be realized through extensive field experience.

Obama continues to provoke Putin with needless sanctions which do nothing to address the crisis in Ukraine. Meanwhile, it has become clear that Putin is also planning a Red Dawn scenario for the United States. And of course, this would not be possible without the direct complicity of President Obama.

In conclusion, it is one thing to intellectually understand how Obama is destabilizing both the military and its leadership. However, it is emotionally earthshaking to be able to trace Obama’s deliberate treason toward to our national defense. From a military perspective, we are in grave danger and this will be the topic of the next part of this series.