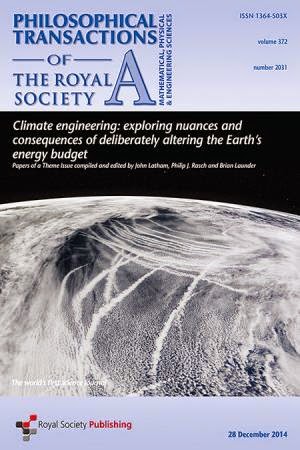 If we could experiment with the atmosphere and literally play God, it’s very tempting to a scientist.  – Kenyan earth scientist Richard Odingo

For those who know about the history of geoengineering – aka chemtrails – you might be noticing a spate of admissions from the halls of establishment science and government that the “conspiracy theory” is no longer … it is a fact.

Perhaps the efforts of independent researchers have forced such open disclosure, at least putting us over the hurdle of abject denial. However, the narrative being created for mainstream media consumption is disingenuous at best, and full-throttle manipulation at worst. Case in point is an admission from The Royal Society that geoengineering experiments are being debated for full rollout even in the absence of policy restrictions.

The elite UK think-tank, The Royal Society, has for years openly discussed control over the planet’s weather.  Their 2011 propaganda press release entitled “Who Decides?” is an overtly Orwellian exercise in problem-reaction-solution that, naturally, argues for a cabal of technocratic insiders to implement godlike power over the unwashed masses who are threatened both by their own ignorance as well as “rogue elements” that could hijack weather manipulation technology.

Mainstream outlet The Verge wound up echoing these supposed concerns in their 2013 article,“Weather wars: who should be allowed to engineer our climate?” which has the subtitle, “Geoengineering could be the silver bullet in fighting climate change — or the start of something even worse.”

Let’s bypass for a moment that there still is intense scientific debate about the legitimacy of those who assign climate change to certain man-made activities, and instead look to these attempts to portray a full consensus that leapfrogs us to do-or-die solutions.

Even though the above story appears to have been originally disseminated by the Associated Press, what was not mentioned in any of the establishment outlets is the backstory that indicates a much longer timeline in getting to the conclusion that geoengineering is possibly the only hope that remains for saving the earth.

The Royal Society published a paper further back in 2009, which was based upon a 12-month study; the results were given the title: “Geoengineering the climate: science, governance and uncertainty.”

If we look at the recommendations from this report, then look at what is being discussed today as something supposedly novel, an agenda emerges. The report recommends:

Citing the slow path of debate and legislation, the panel of “twelve leading academics representing science, economics, law and social science” advocate for climate engineering as a “final hope.”This was 2009, of course; so when we read their latest press release  “Atmospheric particles can brighten cold clouds as well as warm ones” an otherwise innocuous title should trigger an alarm.

Indeed, here we see that what is bullet-pointed above – and discussed within the study – as a non-preferable, potentially dangerous tinkering with global systems is underway.

For the first time, modeling research led by Pacific Northwest National Laboratory found that atmospheric particles can brighten cold clouds in the Arctic. Using simulations, they showed that low clouds over the Arctic may be brightened by deliberately injecting small particles known as aerosols. It’s already well known that injecting aerosols into low clouds over the warm ocean can, in some circumstances, reduce the amount of sunlight that reaches the surface. The concept, untested over the Arctic until now, is called marine cloud brightening, and it can also happen when ships send exhaust into the atmosphere.

The full report consists of 14 articles discussing several climate engineering methods, some openly available here (others are locked). There appears to be a consistent message that the politics of proper governance could impede much-needed field experimentation.

However, there is additional vague language similar to the section above which leaves uncertainty about what exactly has been modeled by computers and what might have already been tested in the open. What cannot be doubted, however, is that the volume of scientific articles now published indicates a real agenda with massive scope, a massive budget and massive consequences.

Also clear is a reinforcement of the meme that climate scientists are proceeding with caution – a notion highlighted recently by Harvard, but which has very little basis in the general history of scientific endeavors that have claimed a do-or-die right to proceed (nuclear, GMO, vaccines, etc.).

As with all things secretive, governmental, and possessing a military component, we only can do our best to independently research cause and effect. Such research by those who have dedicated their energy to uncovering the climate change/geoengineering agenda seem to conclude that engineering the planet’s weather is not a “final hope” … but more likely to be our Finale.