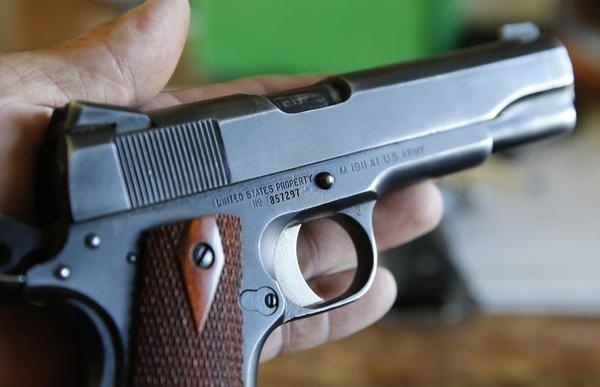 Under New York’s SAFE Act, the state has now identified 278 licensed gun owners who may lose their guns due to the state deeming them “mentally unstable.”

Governor Andrew Cuomo pushed legislators to pass the SAFE Act in the wake of the Sandy Hook shooting in 2012. Many protested the pretended legislation by burning gun registration forms and one man in particular, Aaron Weiss, an American veteran who served in Iraq, declared, “My rights trump your dead. I earned it in blood!” Even sheriffs filed a lawsuit against the law.

Last week, The Syracuse Post-Standard reported that the State of New York has collected 38,718 names of persons who are believed to be “at-risk patients” for owning guns. This information comes from mental health providers. Among those, 737 of those identified are from Central New York.

However, less than one percent of those identified have a gun permit. So what happens when a person has been deemed too “mentally unstable” to possess a firearm?

“Once we get that notification we immediately suspend the permit in order to protect the public,” said Onondaga County Court Judge Joseph Fahey.

Even more telling is that Fahey told the Post-Standard that judges issue the orders without ever viewing the mental health report. So what exactly identifies a person as “too mentally unstable”? We aren’t told, and apparently judges don’t care and neither do the sheriffs. They all just assume they are “protecting the public,” though they don’t have any evidence that what they are doing is lawful.

Once the court issues the order, a deputy delivers it to the permit holder and confiscates their permit and their gun, which are then stored in a secured vault. The citizen may then challenge the order or the judge may allow them to sell their weapon to a gun dealer.

According to the report, the state doesn’t know how many permits were suspended or guns confiscated after the identification of those they claim as “mentally unstable.” The reason for this is due to local officials not being required to tell the state what actions they take. Additionally, permit holders who have been identified may not even know their names are in the database because the mental health providers are not required to obtain consent from the individual before making a report to the state.

In perfect sync, The New York Times also published and editorial piece claiming that a comprehensive 114-page study by Connecticut’s Office of the Child Advocate indicates, “”The conclusion that access to guns drives shooting episodes far more than the presence of mental illness is inescapable. Those countries that have tight gun controls in general experience less overall gun violence and have fewer episodes per capita of mass shootings.”

So, there is a pretended state law with requirements, but local officials don’t actually answer to those requirements? Furthermore, now that the cat is out of the bag that these patients could possibly lose their gun permits, as well as their guns, do people think they will be more inclined to continue seeking mental health help?

Upstate Medical University researchers surveyed 49 mental health patients at an Upstate clinic to find out if they would be scared off from seeking help by a provision in New York’s SAFE Act gun control law requiring mental health professionals to report patients who are potentially dangerous. People with gun permits who are reported to the state can have their guns confiscated and permits suspended.

When the SAFE Act was enacted in 2013, many mental health providers predicted the reporting requirement would make people reluctant to seek mental help and disclose sensitive information about their potential for suicide and violence to a provider, said Dr. Andrew R. Kaufman, an assistant professor of psychiatry at Upstate.

The survey’s preliminary findings suggest just the opposite may be true.

“We were all caught by surprise,” Kaufman said.

Even gun owners, who accounted for 26 percent of those surveyed, said they would not be less likely to discuss their risk of suicide and violence as a result of the law.

I’m not sure I’m buying the claim here considering the small number of people surveyed.

“It only takes one individual to wreak mayhem and tragedy if they have access to a firearm,” said Leah Gunn (yes, that’s her name) Barrett, executive director of New Yorkers Against Gun Violence.

“These are individuals who, under no circumstances, should have guns,” she said.

I attempted to get an answer from Ms. Barrett as to how she could make such a statement. I asked left a message asking, “How can you claim these individuals should not have guns under any circumstances? Did you read their mental health reports?” As of the time of publication, Ms. Barrett has not returned my phone call.

Jed Wolkenbreit, an attorney for the New York State Conference of Local Mental Hygiene Directors, said that hospitals file most of the reports due to people showing up in emergency rooms with mental health issues and according to the SAFE Act, patients are to be reported who are “…likely to engage in conduct that would result in serious harm to self or others.”

Roger Ambrose, director of community services for Jefferson County, said that the reports he reviews indicate the majority of people are suicidal, while a smaller number are homicidal.

I think it a dangerous thing for government to be the determiners of who is and who is not mentally stable. After all, many of us have questioned the mental faculties of the man in the Oval Office, along with many other liberals. Should any of them be allowed to carry a gun?

As for me, I consider the right to keep and bear arms a duty that we should be engaged in and I think neither the federal government nor the state government has any business dealing with these issues. If family wants to be engaged in this issue for those they love, so be it, but government has no place in this matter. In the end, mental health screening is a good way to decrease liberty, but a poor way to increase security.