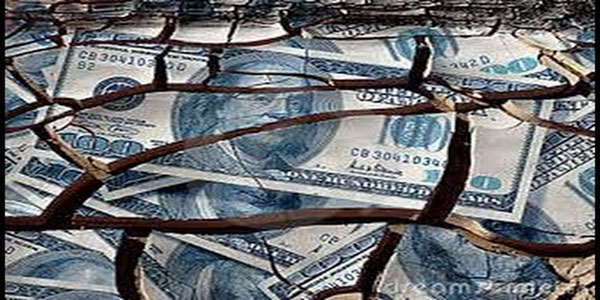 According to the U.S. government the American economy grew at an astounding 3.8% last quarter, signaling to many that the recession responsible for wiping out trillions in wealth and millions of jobs over the last six years is finally over.

Or have the Gross Domestic Product statistics joined the same Bizarro world within which the fabricated unemployment numbers and historic stock market highs are being used to convince Americans that the recovery is complete and boom times are sure to return?

According to the X22 Report, something just doesn’t seem right.

We’re not seeing many corporations hire here. They are laying off at this point. This is why we are seeing the retail sales completely falling. We have an unemployment rate of 5.8%, but prior years the unemployment rate was higher but we had better sales.

Somebody is manipulating the numbers… and we know who that ‘somebody’ is… it’s the U.S. government and central bankers.

In the real world, where people regularly eat food, we see inflation… and if we really calculate it out we see inflation is around 10%…when we subtract a realistic estimate of inflation, once we get even close to 10%, suddenly a negative 11% on Black Friday becomes negative 20%.

Black Friday shopping in the U.S. this year plummeted by 20% or more.

In the realm of economics a year-over-year change of this magnitude is not a plunge. It is a collapse.

Contrarian Shadow Stats economist John Williams, speaking with Greg Hunter’s USA Watchdog, echoes these warnings saying that the information being put out by the government is nothing short of complete non-sense. If these official numbers are true, says Williams, then what we have is the strongest American economy in 11 years.

It doesn’t take a PhD in economics to understand this is a complete sham designed to keep stock markets, banks and the U.S. dollar propped up for as long as possible before the whole system comes unhinged.

No one I know thinks we are growing at 3.9% other than they are trying to sell a bill of goods to the markets, specifically the currency markets… This is the strongest economy we have seen in 11 years, and I can tell you Main Street USA is not seeing that. . . . If you understate inflation, which the government does, you overstate inflation adjusted growth, and that is probably the biggest problem in the GDP report.

Right now, we have a big distortion in the market, and that is the strength of the U.S. dollar. I contend the dollar should be getting much weaker, and indeed it’s going to turn very sharply very soon, and that will be an approximate trigger for a major upturn in inflation. The reason the dollar is strong right now . . . the U.S. economy is booming, if you believe the statistics.  Main Street USA doesn’t believe the statistics.  The rest of the world is in recession, and guess what?  We’re in recession too.  We’re just not reporting the numbers as accurately as the rest of the world.

It’s not going to take much to trigger a reversal of the current circumstances.  It could be an unusually weak economic statistic, and believe me, those are coming.

Most could not have imagined in early 2008, even after horrible earnings reports from major corporations, that a meltdown in the financial world was imminent.

And most don’t believe it now.

It won’t take much for reality to set in and when it does those who did not prepare for it will see life as they have come to know it in America change drastically.

A paradigm shift is coming.