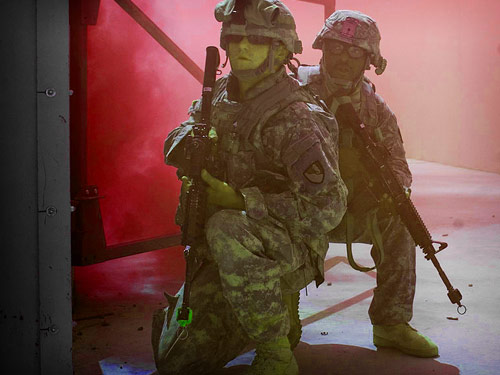 Starting Friday and extending through December 16, Marines from the 15th Marine Expeditionary Unit at Camp Pendleton will be training in Los Angeles “in preparation for a deployment” which includes flying as many as six military helicopters over the downtown area and conducting raids at multiple “undisclosed locations” that will be “off limits to the public for safety reasons,” CBS News is reporting.

But don’t worry, Capt. Brian Block told the Associated Press, “It’s not going to look like ‘Apocalypse Now’ by any stretch of the imagination.” Oh good. That wasn’t my immediate go-to mental image of Marines training in downtown L.A. streets right off the bat, but glad to know that isn’t part of the plan.

Dozens of Marines will raid buildings and shoot paintballs from modified M-15s as part of the exercise, but no residents live in the spots where the pseudo-combat will take place, according to Block.

The military worked closely with the Los Angeles Police Department and notified property owners so no one will be caught off guard, Block said.

Commander Blake Chow with the LAPD’s counter-terrorism unit told KNX 1070 NEWSRADIO the exercise was not linked to any local or regional terrorism threat.

“There’s no terrorism threat out there that would be the reason that these exercises are being conducted, this is something that’s been kind of ongoing for a while,” said Chow. “This is one location amongst many that the Marines are gonna be kind of exposing their people to.” (source)

“One location amongst many the Marines are…exposing their people to”…?

As if exposing our soldiers to military exercises in the streets of urban America like that is normal? Like that is something that is supposed to ever happen?

Like the people living in those areas should just get conditioned to the sight of armed military on the streets as a regular thing?

Well, it’s true many of our law enforcement members believe “America is a war zone.” Wasn’t America designated a part of the battlefield by the NDAA? Guess that’s why even some of America’s school districts are getting mine-resistant, ambush protected (MRAP) tanks straight off the battlefields in Afghanistan as part of the Pentagon’s military surplus program.

The training’s timing is impeccable and more than a little ironic, too, with protests (some turning violent) breaking out all across the country over our burgeoning police state, including throughout California from Berkeley to Oakland.

Just a couple days ago, a whole apartment building went up in flames all at once shutting down major freeways in L.A. and damaging several government buildings including the headquarters of the Los Angeles Department of Water and Power, the Dept. of Parks and Recreation, and the L.A. County Health Services building.

Investigators believe it was arson.

Guess if it happened a week later, people would be wondering if the fire was just another part of the drill…