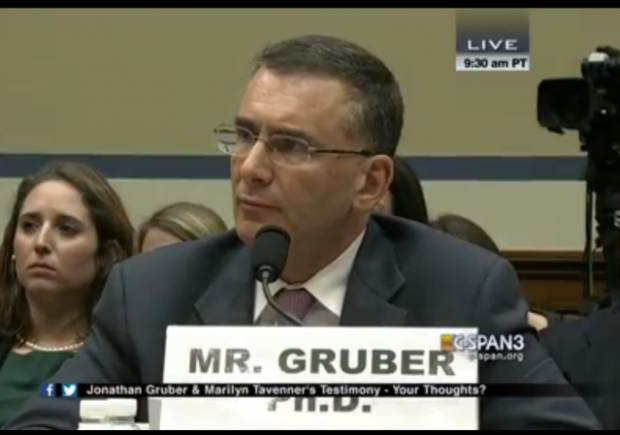 If you recall, in November videos were uncovered showing Obamacare architect Jonathan Gruber saying that the “stupidity of the American voter” helped to pass the unconstitutional legislation. On Tuesday, Gruber appeared to testify before the House Oversight Committee and was summarily spanked by South Carolina Representative Trey Gowdy.

Rep. Gowdy began his questioning of Gruber by pointing to his comments regarding the claims of the stupidity of Americans.

Gruber, who made more than $6 million for his efforts in Obamacare, pointed to the particular venue he was at and said he made those statements to “make himself seem smart.”

“I’m offering it as a defense for using inappropriate, hurtful and inexcusable language to…,” Gruber said before Gowdy interrupted by pushing him to answer the question.

At this point, it’s clear that Gruber has been told to present himself as humbly as possible and recite particular lines that his attorney has told him to state, probably because Trey Gowdy is one that is perceived as a prosecutor that won’t let up in his line of questioning and therefore, would make Gowdy appear in a bad light for “being too hard” on Mr. Gruber.

Gowdy then further pressed, “What did you mean by ‘too stupid to understand the difference'”?

Over and over, Gruber continued his canned answers to Gowdy, speaking like a little boy that just messed his pants and got caught in the process.

“What did you mean when you said you wish that you had been able to be transparent, but you’d rather have the law than not?” he asked.

However, while Gowdy just dug in and humiliated Gruber more and more with each subsequent question, he wouldn’t address the fact that Obamacare is unconstitutional. In fact, Gowdy continued to press Gruber on whether he was sorry he said what he said or whether he meant it. Does it matter? He said it, period! That’s all that matters, and Gruber isn’t sorry he said it. He’s more than $6 million richer for saying it and no one is going to do anything about what he said! He’s sorry he got exposed for saying it.

Rep. Darrell Issa (R-CA) also followed up with a question as to whether or not Mr. Gruber was ever told by anyone in the audiences of the places he made his statements that they were “inappropriate statements.” Gruber said he was never told such things, to which Issa assumed that those people must have agreed with his comments.

Consider that while a lot of people applauded Gowdy’s grilling session of Gruber and Gruber was summarily spanked before the nation, he wasn’t the one who perpetrated this pretended legislation on the American people. It was Barack Obama and the Democrats. Not one Republican voted for Obamacare.

But that doesn’t let them off the hook. Consider that the “conservatives” were trying to sell us Mitt Romney in 2012 with the slogan of “Repeal Obamacare,” which later became “Repeal and Replace Obamacare.”

Gruber was the consultant not only on Obamacare, but on the alleged “conservative” Romneycare. That’s right, he was the one that openly declared, “Romneycare was the blueprint for Obamacare.”

Mr. Gruber told Lawrence O’Donnell, “The truth is that the Affordable Care Act is essentially based on what we accomplished in Massachusetts. It’s the same basic structure applied nationally.”

Mitt Romney even took time to thank Jonathan Gruber, who “devoted hours and hours to an essential econometric model.”

Romney wanted his plan on a national level as well, but he was trying to sell it as something that would be a states’ issue. The reality is that Massachusetts uses more than $385 million per year in federal funds to help fund its “state healthcare mandate.” Therefore, Romneycare, though it claims to be a state program, uses federal dollars. Romney just wanted the federal government to mandate that states come up with their own program, but it would still be federally mandated, something that is just as unconstitutional as Obamacare is.

But back to the point at hand, Rep. Gowdy gave Jonathan Gruber some of what the American people feel towards him and that was a public humiliation, but I’m still wondering when we are going to get down to dealing with the unconstitutionality of Obamacare and actually dealing with the removal of this pretended legislation and bringing justice on those who have perpetrated it on the American people. When are we going to move past the hearings, past the investigations and onto justice? Frankly, I’m tired of watching the Washington version of WWE. How about you?