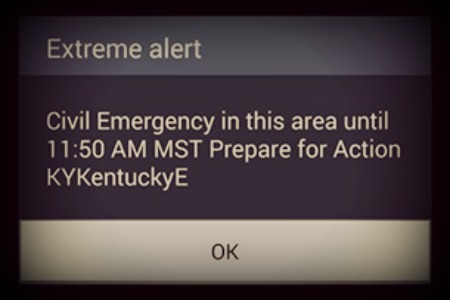 On Tuesday, thousands of Kentucky residents received an alarming “Civil Emergency” alert on their cell phones.

The message was sent by the Emergency Operations Center. Spokesman Buddy Rogers said the alert was accidentally sent out “during testing” and was the result of  a “computer error followed by a human error.”

According to the FCC, the Wireless Emergency Alert system is a public safety system that allows customers who own certain wireless phone models and other enabled mobile devices to receive geographically-targeted, text-like messages alerting them of imminent threats to safety in their area.

Paul Joseph Watson of Infowars reported that many residents find the messages – which are meant to warn people of immediate safety threats in their area – invasive.

Here’s Watson reporting on the story:

The bizarre message isn’t the only funny business going on in Kentucky, though:

However, over a hundred respondents flooded the comments of a Sheriff Department’s Facebook post, many of whom reported seeing military helicopters performing low-flying maneuvers immediately after the alert was sent out.

Residents also contacted Infowars, with one writing, “I’m a London Kentucky resident who received this horrible message today along with all of my friends and family. The most un-nerving part of it all was all of the Black Hawk Helicopters in our skies at the same time… This was NO ACCIDENT!!!”

The reader went on to state that locals watched the helicopters “take off from our tiny airport out of nowhere”.

Residents questioned the timing of the “erroneous” message and the presence of the helicopters in the area:

“What was the deal with the low flying Chinook that rattled my roof shortly before the test msg,” asked Casey Woods.

“6 black helicopters above our house this morning shook the whole house!! Then this..scary!” stated Leila Hughes.

“If it was just a test then how come 6 army helicopters was flying in formation over Clay Co just moments after the text was sent out?” asked Angie Gibson.

“I don’t care what they say, that wasn’t a test, it was a warning….there’s a few other comments from people that know what I’m talking about,” stated Vince Bowling.

“Maybe they just want us to think it’s a test,” said Angel Norton.

Some speculated that perhaps the message wasn’t sent in error – maybe it was just sent to the wrong people. Maybe it was meant for government employees or emergency responders.

Watson and others have suggested this could be a cover-up of some kind, or a test run for martial law.