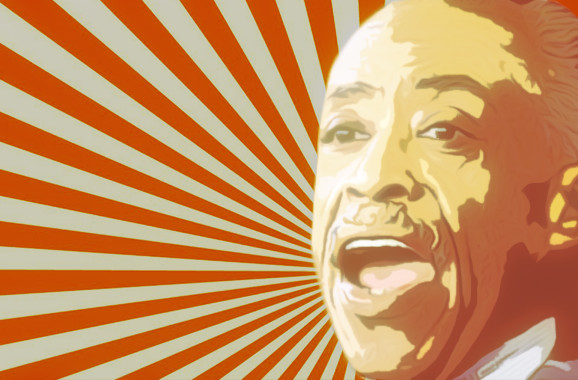 In the wake of recent tragedies in Ferguson and New York, the ‘Reverend’ without a congregation Al Sharpton has proven once again that he is nothing more than a political pimp who is only interested in serving one color; green.

Why do you treat families in mourning like a host for you to leech your ever expanding ego onto?

Before the family of Akai Gurley, the unarmed man who was recently shot and killed by a rookie NYPD officer, were even allowed to process the horror which had just befallen them, you began weaseling your way into the arrangements. It takes an incredible amount of classless audacity to issue a press release promising to deliver the eulogy at someone’s funeral, all without consulting the grieving family or offering to lend any financial assistance for the service. You managed to muster up just the right amount of boorish arrogance to do just that though didn’t you?

“It’s been a nightmare. He just wants to take credit for this when he’s never even contacted my sister (Akai’s mother). Who made you (Sharpton) the spokesperson of our family? We just want to bury our nephew with dignity and respect.”

Ms. Petersen, who was horrified when she read that Sharpton billed himself as the eulogist for a Friday funeral, when family was planning on a Saturday service, went on to say,

“How can you do a eulogy for someone you don’t even know? It’s heartbreaking.”

Gurley’s aunt also stated that all Sharpton sees “is money and political gain and that he is turning the tragedy into a circus.”

Dr. Cornel West, while addressing a group of students at Miami Dade College, recently had this to say about Sharpton,

So Brother Sharpton, you can be a self-proclaimed Civil Rights leader just like I can call myself a lion tamer, that doesn’t make either statement true.

Am I “Keepin’ It Real” enough for you yet?

Do you think Dr. King would have ever hosted WWE’s Monday Night Raw? Well you did.

Do you think an anti-police state activist would work for US state-run media? Well you do.

Do you think Medgar Evers would have ever hosted a reality show on Spike TV called ‘I Hate My Job’? Well you did.

Do you think that Rev. Abernathy, Stokely Carmichael, or Whitney Young would have continually appeared on the Morton Downey Jr. show pretending to oppose the host in front of the camera while high-fiving him backstage?  Well you did.

Then again, maybe I’m the only one who doesn’t trust the actions of an FBI informant.

Does that make me, as you would call it, a “punk faggot“?

Al, when you show up to anti-police brutality protests, you discredit them. You hijack them. You are part of this broken system. It’s time for you to get out of they way of young activists that are ready to change the world that you have grown so comfortable in.