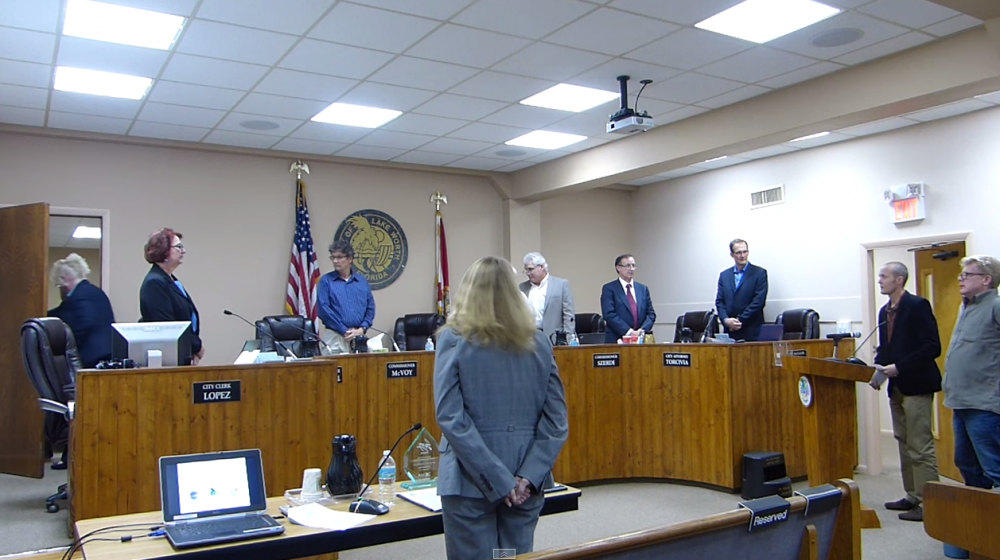 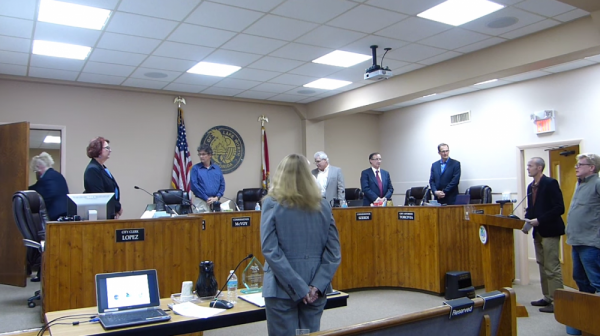 More and more we are seeing an opening in America to paganism, false religions and open Satanism. The strange invocation that came from the Lake Worth, Florida City Commission meeting on December 2 of this year exemplifies this, only it was apparently an anti-theist that gave the invocation.

Miami anti-theist Preston Smith stood and gave an utterly moronic invocation, if you can even call it that as several of the commissioners and the mayor got up and walked out before he gave the invocation.

Lake Worth Mayor Pam Triolo and three other commissioners exited the area, but later returned for the Pledge of Allegiance.

While I don’t know Mr. Smith, with his first words he sounded incredibly effeminate. He believes that we “can create a better, more equal community without religious divisions.”

Of course, we all know that is not what he wants. He simply wants people not to speak about God and morality. Though he mentions Satan, Allah, Buddha, Zeus, and even Jesus, it all comes down to the fact that he openly states that he wants people to “do good for goodness sake” and he doesn’t want to hear about damnation or judgment.

The problem for Mr. Smith is that he has no authority outside of himself to determine what is good. Second, by his own logic, he has no means to impose his view of goodness upon anyone else.

He mocked true prayer by calling on the remaining members and others in attendance to “pray.” In a similar manner to the RINOs in the House, who stood by reverently as an Islamic imam offered a “prayer” to Allah, these people stood by silently with heads bowed reverently as Smith demonstrated his foolishness.

“Mother Earth, we gather today in your redeeming and glorious presence to invoke your eternal guidance in the universe, the original creator of all things” Smith began.

With that statement, Smith is exercising a faith of something he cannot prove and therefore his anti-theism is really a religion that the apostle Paul speaks about in Romans 1, when he said that men worship and serve the Creation (Earth), but not the eternal God, who is blessed forever.

“May the efforts of this council blend the blessings of Allah with the all-knowing wisdom of Satan,” he continued. “May Zeus, the great god of justice grant us strength tonight. Jesus might forgive our short comings while Buddha enlightens us through his divine affection.”

He went on to praise Krishna and mockingly took the words from the apostle Paul in Romans 8:31 and applied them to Thor.

Finally, he thanked the atheists, agnostics and humanists (all anti-theists) for logic, reason and science, not knowing that Jesus is the logic (logos) and that there is no reason or true science apart from the Creator. He also threw in that these people allegedly count for 1 in 5 Americans, which has yet to be proven. It’s similar to those claims about the sodomite community that have been refuted.

Mayor Triolo said, “I didn’t leave because Mr. Smith is an atheist, I left because of his alleged tweet.” Trilio believed that Smith would mock Scripture as he did in his Tweet, which he did as you can hear for yourself. His “prayer” was not only mockery, but blasphemy.

Triolo added, “Free speech works both ways. You can say what you want and I can choose to leave.”

It really would be helpful if people actually learned what free speech is about and what it is not about, but the mayor is correct, just because someone wants to speak does not give them the right to make you hear what they are saying.

Commissioner Christopher McVoy, who stayed for Smith’s speech, called the move by the other commissioners and the mayor “un-American.”

“[Walking out was] very un-American, and a slap in the face to the principles people fought very hard to make sure we had those rights,” said McVoy.

Each of the commissioners and the mayor was contacted by this writer and asked for comment, but as of the writing of this article, none have responded. Frankly, if any of them were Christians in the bunch, they should not have gotten up and walked out, but took the opportunity to refute Smith’s ridiculous notions that he presented in his little fairy tale talk, which was neither logical nor reasoned nor scientific.

When a nation forgets God, God brings judgment upon that nation and we are seeing it before our eyes… blasphemers, idolaters, sodomites and other sins and crimes abound in our nation, and why? The Church has not been salt and light, but rather has pampered herself and whored herself out, despising the cross of Christ for the accolades of man. It’s time the Church repented and stood against the gates of Hell and prevailed over them once again. Without such repentance, there is simply more judgment to look forward to.