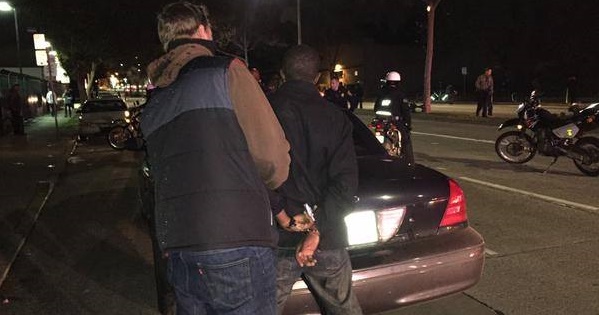 OAKLAND, CA- A Wednesday night protest in Berkeley ended after an undercover California Highway Patrol cop  pulled a gun on attendees. Earlier in the evening, between 100 and 200 protesters gathered to continue protests that started last week over the lack of indictments in the police murders of Michael Brown and Eric Garner.

The protest started on the University of California Berkeley campus and participants marched to Wheeler Hall, where businessman Peter Thiel was giving a talk–coincidentally on the effectiveness of the nation-wide protests. Protesters were not allowed in the auditorium but eventually forced their way in.

By the time the crowd thinned out to between 30 and 50 people, the protest had made its way to Oakland. It was there that demonstrators discovered two undercover cops, who were dressed as civilians and wearing bandanas over their faces.

A protester and Berkeley resident who identified himself only as “Dylan” reported that he pulled a bandana off of an officer’s face:

“I’m a white man, and I pulled off (the officer’s) mask, but they punched a black man…He got arrested.”

According to KTVU News,

“The two policemen started to walk away, but the protesters persisted, screaming at the two undercover cops. One of the officers pushed a protester aside. The man responded by pushing back and then the officer tackled him to the ground, handcuffing him.

The crowd, incensed, began to gather around them. The second officer pulled out his gun and pointed it at the crowd. More officers quickly arrived and dispersed the crowd.”

A Reuters photographer captured the officer pointing his gun. Storify reported that the officer also pointed his gun at the camera.

Oakland police reported in a press conference that the undercover officers were California Highway Patrol (CHP).

Police are claiming that an officer was assaulted, which allegedly prompted the arrest and drawing of a gun. After the incident, more officers converged on the scene.

The mostly peaceful protest did see several protesters throwing rocks as businesses, one of which shattered the glass of a T-Mobile store. A Chase bank was also targeted and according to the City of Oakland, looting was reported in a small business area in downtown. Storify posted screen shots of tweets alleging the cops had been banging on store fronts before they were outed.

https://twitter.com/DaveId/status/542964398923345920
Nightly demonstrations have turned violent in the San Francisco Bay area, where police tear gassed, pepper sprayed and beat protesters and where other demonstrators shut down freeways.

The CHP is no stranger to police brutality and controversy. An officer recently resigned after beating a woman on the side of the road during a traffic stop. They arrested 150 police brutality protesters who blocked a highway on Monday night.

Wednesday’s protest was organized by the activist group, By Any Means Necessary, which aims to see “killer cops” jailed and charges against protesters dropped. More details are expected to emerge.