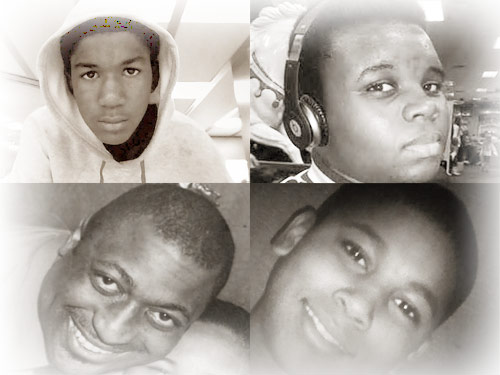 For those of you out there who still do not believe the recent protests have a race-baiting motive aimed at causing the American citizenry to fight amongst themselves and ignore the bigger stuff going on with our government and the world right now, take a look at what former FBI informant Rev. Al Sharpton has been busy cooking up.

The mother of Tamir Rice will join the Rev. Al Sharpton and the families of Michael Brown, Eric Garner and Trayvon Martin to lead a march against police brutality and excessive force through the nation’s capital Saturday.

The march, organized by Sharpton’s National Action Network, will begin at Freedom Plaza in Washington D.C. at noon and end with demonstrators at the steps of Capitol Hill calling for national reforms in how police officers are investigated after uses of force.

Oh, and the families also appeared Friday night in a joint interview with CIA asset Anderson Cooper on CNN.

Not to turn this into a race issue the way people like Sharpton and the forces behind him — including the government with its obvious agenda and the establishment media in tow — have, but notably not present at the march or invited on the Cooper interview are the families of many other people shot and/or killed by police officers in the last few years, of which there are many to choose from.

In other words, the people who have been invited have been cherry picked and are being used for a very specific agenda — to portray white cops killing black victims, when in reality it is our militarized, increasingly federalized police of all colors in a much wider pattern of abuse.

Where’s the family of Kelly Thomas, a homeless man diagnosed with schizophrenia who was beaten into a coma by police and later died on July 10, 2011 from his injuries? The cops beat him so brutally, they broke the bones in his face and he choked on his own blood. In a shocking move (shocking because it hardly ever happens), one of the officers involved, Manuel Ramos, was actually charged with second-degree murder. He was later acquitted… Somehow…

Where’s the family of Robert Ethan Saylor, a 26-year-old man with Down’s Syndrome who died at the hands of off-duty Sheriff’s deputies guarding a movie theater on January 12, 2013? Saylor was so excited about the movie he had just watched, that he did not want to leave the theater after it was over. Obviously he did not comprehend that he had to purchase another ticket and his caretaker even told police “Please don’t touch him, he will freak out,” if they put their hands on Saylor due to his mental condition. For the price of admission, Saylor’s life was snuffed out on the floor in handcuffs by officers who apparently thought his offense of not leaving the theater fast enough or failing to buy another ticket was so egregious, it was worth his life.

Where’s the family of Cheyenne-Arapaho Teen Mah-hi-vist “Red Bird” Goodblanket, an 18-year-old American Indian diagnosed with oppositional defiant disorder who was shot by police nine times and died in December 21, 2013? His parents had called police because they were afraid Goodblanket might be a danger to himself; turned out the police were a bigger danger than Goodblanket was.

Where’s the family of James Boyd, a mentally disturbed 38-year-old Caucasian homeless man who was “illegally camping” outside after the city homeless shelters had closed, was shot in the back and killed by cops in Albuquerque, New Mexico on March 21, 2014? He had agreed to leave the site, did he really have to die over it? Apparently cops in that town have killed 26 people since 2010, which is a figure higher per capita than that of Chicago or even New York City. Also of note is the fact that not only were the officers cleared in this shooting, but officers have been cleared in every officer-involved shooting in that town in the last 13 years by Albuquerque district attorney Kari Brandenburg. Also of note is the additional fact that the city has paid out some $30 million in settlements to the families of those killed there by police, $6 million of which went to the parents of a young man with mental health issues who was gunned down by police in his own backyard because they said he was armed; turned out, the man was holding a broom which he set down as cops showed up.

Where’s the family of Jonathan Ferrell, A 24-year-old former college football player who wrecked his car on September 14, 2013 and was literally running towards police for help when one gunned him down in the street, shooting him 10 times and killing him?

Where’s the family of Bobby Canipe, a 70-year-old military veteran who was simply reaching for his cane when he was shot in the stomach during a traffic stop in South Carolina on February 25, 2014? Luckily he didn’t die, but all he did was have the unfortunate luck to come face-to-face with a jumpy young cop at the wrong time in a traffic stop and now he is lucky to still be alive.

Where’s the family of a seven-year-old girl who was the victim of a no-knock SWAT raid at the WRONG house in Detroit, Michigan on May 16, 2010? A Special Response Team threw a flashbang grenade through the window onto the couch she was sleeping on, then went in and shot her in the head, killing her. Police State USA reports that the officer who shot the girl was previously involved in a federal lawsuit for another no-knock raid where rifles were aimed at other small children and two family pets were shot back in 2007.

This list could go on and on (and on and on). It’s disgusting. And mentioning the races of each of the people killed or harmed by cops and the cops who did the killing here doesn’t change the fact that there’s a pattern and people are dying.

On top of that, the FBI apparently doesn’t require police departments to report “unjustified” homicides or “arrest-related deaths,” so we can’t even be sure of what kind of statistics we’re even looking at here. However, the Killed by Police Facebook page had listed more than 1,450 deaths since May 1, 2013 when it was first launched as of November 2014. As Joshua Krause reported last month, that means an average of about 1,100 people per year or three people per day!

Because you see, what we have here in America is a POLICE STATE, and more and more reports are surfacing that police are wrongfully killing people — lots of people of all ages, races, and sexes.

Instead of everyone of all colors and creeds uniting together against this burgeoning police state that has been building up around us all in America for years now, the authorities and mainstream media have decided to use this issue at this specific time (while the cold war with Russia quietly goes hot in the background, all-but ignored) to divide people on race lines and stall any real change from actually happening.

Did you know we have over 18,000 police departments in this country? That’s many more than any other country in the world. Well look at what Obama has done just days following the Ferguson grand jury decision. He implemented a $263 million policing initiative which certainly didn’t come out of nowhere all of a sudden and which will give more federal jurisdiction over local law enforcement agencies.

I repeat: will give more federal jurisdiction over local law enforcement. The federalization of police. A dark road we’ve been going down for decades now which has been amped up with the addition of Homeland Security post-9/11.

It will also include a Task Force on 21st Century Policing, which the Obama Administration says will supposedly help build community trust with police, to be chaired by Philadelphia Police Commissioner Charles H. Ramsey — a man who has a history of abuses, and more specifically, civil rights violations!

Meanwhile is the White House going to stop giving weapons of war to our local police departments under the Pentagon surplus program? Of course not. Oh, but they will get “more training” on how to use them! Woo hoo! I guess that even includes the San Diego Unified School District Police Department which recently acquired its own MRAP vehicle, which the chief there claims will be filled with teddy bears and used for rescue missions. A school with a TANK. What the hell?

Again, this entire thing isn’t about anything other than race baiting, using fear to get people to fight amongst themselves, distracting the sheep, and ultimately, giving more power to the system…