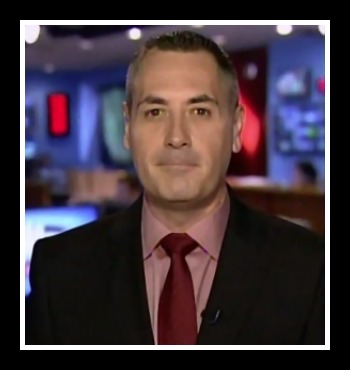 Di-Natale most recently worked as a freelancer for Fox News West Coast bureau in Los Angeles. His last day with the network was November 30.

The exact cause of his death has not been released, but Fox News reports that the 43-year-old took his own life:

The coroner in Jefferson County, Colo., where Di-Natale owned property, said the veteran journalist took his own life. Officials discovered Di-Natale’s body Wednesday after being alerted by a friend who knew of his state of mind regarding serious undisclosed health issues.

Di-Natale began working for Fox News in 2007, and covered international news for the network:

In September, 2008, he traveled to Baghdad to report for Fox News. Over the next several years, Di-Natale shuttled between the U.S. and the Middle East, reporting for Fox News and working on independent projects.

In 2011, after Al Qaeda leader Osama bin Laden was killed at his Abbottabad compound, Di-Natale provided coverage of the raid’s aftermath, including an exclusive interview with Shakil Afridi, the doctor who helped U.S. agents verify Bin Laden’s presence, and who remains imprisoned in Pakistan to this day.

Di-Natale notably reported from Osama bin Laden’s Pakistan compound in the aftermath of the US raid, and is known for chiseling out a brick from the compound:

Call me a conspiracy theorist, but when I heard about Di-Natale’s death, the first thing that popped into my mind was this:

It isn’t that far-fetched to suspect foul play when a journalist who covered controversial stories suddenly dies.

I can think of two notable examples immediately.

One is Andrew Breitbart, who, at age 43 (the same age as Di-Natale) collapsed and died on the street in front of his house on March 1, 2012 – just hours before he was set to release damning video footage that could have destroyed Barack Obama’s 2012 re-election campaign.

And then there’s the disturbing case of Michael Hastings, a journalist who died in a mysterious car crash on June 18, 2013. Hastings was preparing to publish a major investigative piece tied to the undercover agent who is suspected of sanitizing President Obama’s passport records prior to the 2008 presidential election. He also was investigating abuses by the CIA and NSA.

Hastings also wrote a piece about Bowe Bergdahl. He was able to convince fellow soldiers to speak upon conditions of anonymity while disobeying the “gag orders” of their superiors. That piece was published in Rolling Stone on June 7, 2012. The FBI was investigating Hastings. He died just hours after sending out an email warning friends about the agency’s investigation.

It isn’t unusual for people like journalists and whistleblowers who threaten to expose controversial government secrets to turn up dead under suspicious circumstances. Last year, the Obama administration’s DOJ admitted to unconstitutional surveillance of more than 100 Associated Press reporters and editors. US security officials have been heard saying that NSA whistleblower Edward Snowden and Glenn Greenwald, the journalist who reported his story, should be “disappeared.”

Just over a month ago, Michael Snyder of End of the American Dream published the article Is Barack Obama Attempting To Harass And Intimidate Media Personalities On His ‘Enemies List’?  Here is an excerpt from that piece:

Someone is attempting to harass and intimidate media personalities that are very critical of Barack Obama and his administration.

Of course Barack Obama (or any of his top lieutenants) would never come out and publicly admit that Gestapo tactics are being used against media personalities on Obama’s rumored “enemies list”, but that appears to be precisely what is happening.

Snyder goes on to detail the harassment and intimidation of TruTV reporter Rick Wiles and former CBS reporter Sharyl Attkisson and shows strong anecdotal evidence that federal agents were involved.

Authorities say that a friend of Di-Natale’s contacted officials to express concern over his “state of mind regarding serious undisclosed health issues.”

Maybe Di-Natale had a serious illness. Maybe he had just been diagnosed with a life-threatening condition. Maybe he really did take his own life.

Or, maybe he knew too much. He reportedly died the day after the Senate Intelligence Committee’s controversial CIA torture report was released. That report revealed that torture of detainees did not aid in the finding and killing of Bin Laden:

It added that most of “the documents, statements and testimony” from the CIA regarding a connection between the torture of detainees and the Bin Laden hunt were “inaccurate and incongruent with CIA records.”

Di-Natale’s last assignment was the coverage of protests in Ferguson over the Thanksgiving holiday. Did he discover something while he was there?

Di-Natale’s last post on his Facebook page was made on December 1, 2014. He posted a link to an article titled Don’t Tell Me We Lost The War In Afghanistan on November 30. A few of Di-Natale’s friends commented on the piece, and he responded twice on December 1.

Here are his two responses:

I think it speaks volumes that the Taliban blow up their schools… Men of terror scared of young girls and their potential.

LOL – this makes my heart glow… I get roasted on the West Coast for my career with Fox but no-one wants to talk about Obama’s flaws when I point them out. Someone recently said Fox was the only media outlet that acted like a watchdog on his administration because all the others were so left-leaning. They have a point.

Here we have a reporter who was at Bin Laden’s compound and covered the story of his alleged killing by Navy Seals. The US government’s official narrative of the killing has been hotly disputed by many, including Pakistani TV reports, Dr. Paul Craig Roberts, and Pulitzer Prize-winning journalist Seymour Hersh.

Earlier this year, RT reported that a top US commander made a curious demand:

Eleven days after the 2011 US elite forces raid that resulted in the killing of Al-Qaeda leader Osama Bin Laden, the head of US special operations ordered the destruction of all photos of the corpse or for them to be given to the CIA, new evidence shows.

The disclosure was revealed Monday in an email obtained and released by non-profit legal group Judicial Watch via a Freedom of Information Act (FOIA) request. The heavily-redacted email was sent by Admiral William McRaven, head of US Special Operations Command, to subordinate officers on May 13, 2011, instructing them that any remaining photos of Bin Laden’s body must be destroyed or handed over to the CIA. Bin Laden was killed on May 2, 2011 at his compound in Abbottabad, Pakistan, by the special operations team commonly known as Seal Team Six during Operation Neptune Spear.

In the email, addressed to “Gentlemen,” McRaven wrote, “One particular item that I want to emphasize is photos; particularly UBLs [Usama Bin Laden, as US military referred to him] remains. At this point – all photos should have been turned over to the CIA; if you still have them destroy them immediately or get them to the [redacted].”

The order to purge the photos came 11 days after the conservative government transparency organization Judicial Watch filed a FOIA request with the Defense Department seeking “all photographs and/or video recordings of Usama Bin Laden taken during and/or after the U.S. military operation in Pakistan on or about May 1, 2011.”

It is very likely that Bin Laden actually died ten years prior to the 2011 raid. His death was widely reported in 2001 and 2002, with a death date of December 26, 2001 most commonly referenced in obituary notices and news reports.

Even Fox News reported that Bin Laden died in 2001.

Much like the deaths of Breitbart, Hastings, and Bin Laden himself, the truth about the passing of Di-Natale may never be publicly revealed.

Lies, scandals, cover-ups, and mysterious deaths…just another day in America.