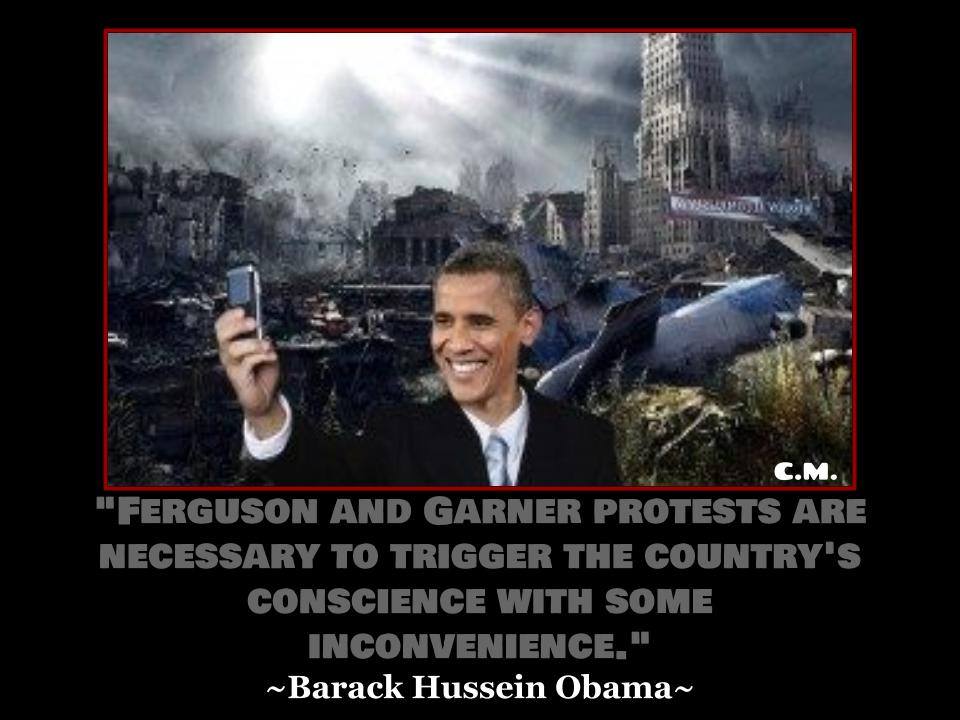 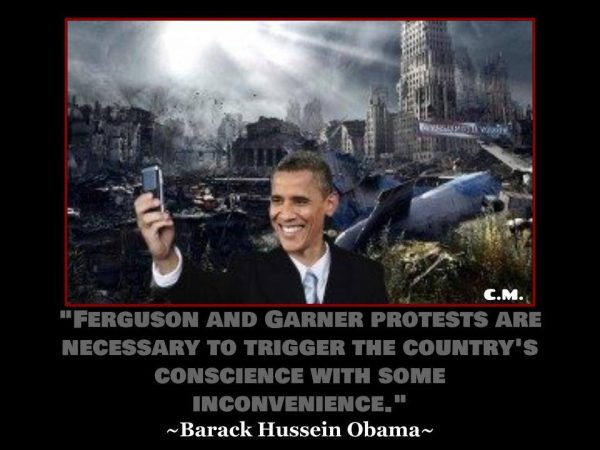 With the groundswell of these racially charged spectacles that have literally set fire to parts of the nation in recent months under America’s first half-black president, we now have your tax dollars jumping aboard the Obama black privilege bandwagon with the recent spectacle on Capitol Hill highlighting an assortment of Congressional aides and some of the lawmakers they work for merging with this salacious trend of protests on parade. Your tax dollars at work. Never mind their failing to make this a cardinal opportunity to address the actual source of the internal issues that are laying waste to the black community daily. No, instead we get this disgraceful assemblage of black government employees advancing further racial division with their showing of, ‘hands up, don’t shoot‘, which was proven to be a false narrative attributed to the Michael Brown shooting. Predictably turning Capitol Hill into their bully pulpit, ignoring the inconvenient truth that what is required in their search for solutions would be a fundamental acknowledgement to the basic understanding in the need to begin accepting responsibility and accountability for one’s own personal behavior. 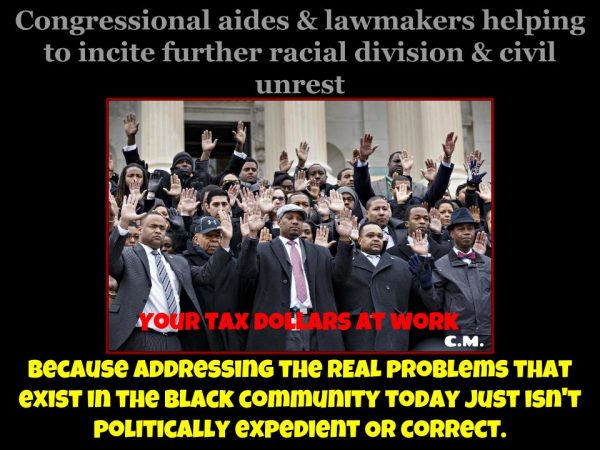 We’ve seen how Obama scrimmages to dodge and evade any personal responsibility and accountability for his own capacious labyrinth of lawlessness and venality from his slew of miscellaneous scandals and manufactured crises. Even as Barack Obama and others of his administration have been steadfast in their deliberate collaboration to help fan the fires of this growing racial disunity sweeping the country. Motivations aren’t difficult to divine given that to accept such precepts as personal responsibility and accountability would consequently erode and undermine any basis to this sense of entitlement these militants have relied upon to operate under in their carrying out acts such as those we’ve seen in Ferguson, Missouri. Horrific exhibitions that can only be defined as nothing less than domestic terrorism. Terrorism which Obama gave approval of with his explicit sanction to these radicals to “Stay on course“.  We subsequently saw the destination that course led to following the public release of the Ferguson grand juries decision not to indict police officer Darren Wilson for his public service in expediting the removal of a criminal element from society.

I guess as we’re being demanded to apotheosize thugs now, it follows too then that we’re also expected to ignore the statistical reality which reveals blacks are responsible for a higher percentage of the criminal activity in the country. As detailed in a July 21st, 2014 article at Washingtontimes.com:

Any candid debate on race and criminality in the United States must begin with the fact that blacks are responsible for an astoundingly disproportionate number of crimes, which has been the case for at least the past half a century.

Crime began rising precipitously in the 1960s after the Supreme Court, under Chief Justice Earl Warren, started tilting the scales in favor of the criminals. Some 63 percent of respondents to a Gallup poll taken in 1968 judged the Warren Court, in place from 1953 to 1969, too lenient on crime; but Warren’s jurisprudence was sup­ported wholeheartedly by the liberal intellectuals of that era, as well as by politicians who wanted to shift blame for criminal behavior away from the criminals. Popular books of the time, like Karl Menninger’s “The Crime of Punishment,” argued that “law and order” was an “inflammatory” term with racial overtones. “What it really means,” said Menninger, “is that we should all go out and find the n–– and beat them up.”

The late William Stuntz, a Harvard law professor, addressed this history in his 2011 book, “The Collapse of American Criminal Justice.” “The lenient turn of the mid-twentieth century was, in part, the product of judges, prosecutors and politicians who saw criminal punishment as too harsh a remedy for ghetto violence,” wrote Mr. Stuntz. “The Supreme Court’s expansion of criminal defendants’ legal rights in the 1960s and after flowed from the Justices’ percep­tion that poor and black defendants were being victimized by a system run by white government officials. Even the rise of harsh drug laws was in large measure the product of reformers’ efforts to limit the awful costs illegal drug markets impose on poor city neighborhoods. Each of these changes flowed, in large measure, from the decisions of men who saw themselves as reformers. But their reforms showed an uncanny ability to take bad situations and make them worse.”

Of course it doesn’t help matters when we have America’s first black president indulging in his customary rabble-rousing as he did during an interview on Black Entertainment Television where he again asserted that racism is “deeply rooted” in American society (since that’s obviously what propelled him into the highest office of our land).

Meanwhile, we have the United States Federal Judge who granted an injunction on December 11th in favor of (i.e. rewarding) Ferguson rioters and looters efforts to stop law enforcement from using tear gas on them:

~The temporary restraining order comes just weeks after the last rounds of heavy protest in Ferguson in response to a St. Louis County grand jury’s decision not to indict the police officer who shot and killed Michael Brown Jr. A group of protesters had filed the lawsuit asking for a restriction on police use of tear gas and excessive force during demonstrations. U.S. Federal Judge Carol Jackson heard testimony for nine hours, from plaintiffs as well as police from St. Louis County and the city of St. Louis, according to Brendan Roediger, one of the lead attorney’s on the case.

“Ultimately she decided there was substantial evidence that police had violated the constitutional rights of the protesters, that it was a restriction on their free speech,” Roediger told msnbc shortly after the judge made her ruling.

“The best thing the judge said and she said it a couple of times, was that ‘it’s clear to me for some reason the police are treating this group, around this movement, differently than they treat other large crowds,” Roediger said. “Hopefully it’ll put an end to the practice of protesters having no idea what the police response will be. No more of this sort of punishment in the streets where what the police are going to do is unpredictable and often violent,” he said.~

We certainly can’t have these deranged assailants being distracted by police doing their job of ENFORCING THE LAW while they busy themselves with burning businesses to the ground and beating caucasians to death in the streets with hammers while shouting, “Fuck the white people“, “Kill the white people” (as was reported in the recent south St. Louis murder of Bosnian immigrant Zemir Begic). Just another fundamentally transformative moment brought to us courtesy of Barack Hussein Obama (the biggest non-enforcer and violator of our laws that we have). Where police are literally prohibited from keeping the peace while domestic terrorists are permitted free reign to terrorize under the protection of what now passes for the law in Obama’s America. And just when I thought there’s no way things can possibly get any more backwards in our country than they already have. 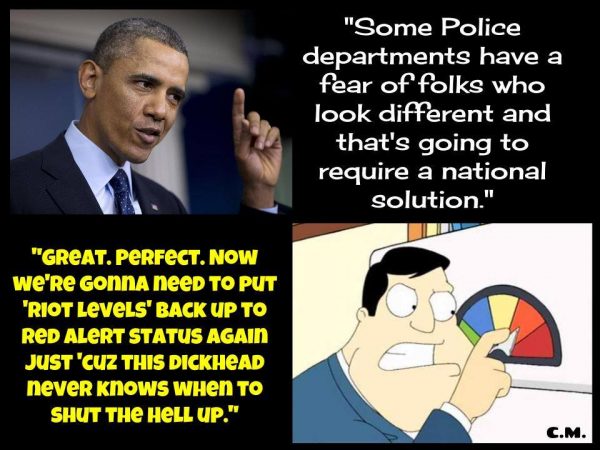 Then there’s always those liberal mooncalves who enjoy blaming conservative sources as their reason for believing no solutions to racial inequality will ever be forthcoming. Selective cherry pickers who operate in the undeviating state of cognitive dissonance that provides a necessary barrier between them and the harsh environment of reality. Never mind I guess the significant, encompassing influence the Democratic Party has had during these past 50 years in their politically crafted demolition of the culture belonging to those very people they had previously sought to keep in perpetual bondage under the yoke of slavery.

What I’ve taken from this bizarre mosaic of publicized societal dysfunction is that while we’ve been on this precipitous slippery slope of perceived languishment for decades now, in less than 6 years our country has shifted gears into overdrive apparently and completely lost its collective mind thanks to Barack Hussein Obama, his steady diet of Saul Alinsky we’re being force fed in bigger and bigger portions, and an insurrectionary cabal of bellicose dissentients. When you have some Federal Judge obstructing law enforcement officers from actually enforcing the law against criminals, what else can you take from this? I mean other than the fact that America’s first black president has so politically degraded the rule of law in our country, its natural function has become perverted as to be virtually unrecognizable. 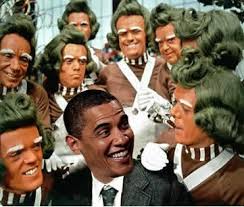 Being ‘black‘ in America now is akin to having the golden ticket. Obama Wonka has turned our country into his own personal Race Merchants factory, encouraging and giving those minority Oompa Loompas who dwell on the Democrat plantation broad latitude to commit a wide range of assorted criminality and to comport themselves in some of  the most licentious and reprehensible behavior imaginable. So it stands to reason why there’s evidently no such belief as too low impeding their conduct these days.

Al Sharpton’s quite the busy little Democrat Oompa Loompa. He’s been a personal guest at the White House 61 times since 2009. Five days a week he hosts his nationally syndicated talk radio show, Keepin’ It Real, as well as overseeing hosting duties for his nationally televised MSNBC program, PoliticsNation. And still he finds time to travel around all over the country inciting riots, promoting civil unrest and advancing racial animus. All accomplished without even an ounce of remorse or a shred of accountability.

Case in point, the latest race driven debacle that you won’t be seeing reported about on the CBS Evening News involves agitators passing through the Murray Hill area of New York City as part of Al Sharpton’s Washington D.C. Millions March event, while shouting: “What do we want? Dead cops! When do we want it? Now!”

I wonder if some activist Federal Judge in New York will grant an injunction forbidding police officers there from being allowed to defend themselves altogether.

The reality is that blacks will never overcome anything as long as they continue being their own worst enemy and disposable pawns for the Democratic Party. 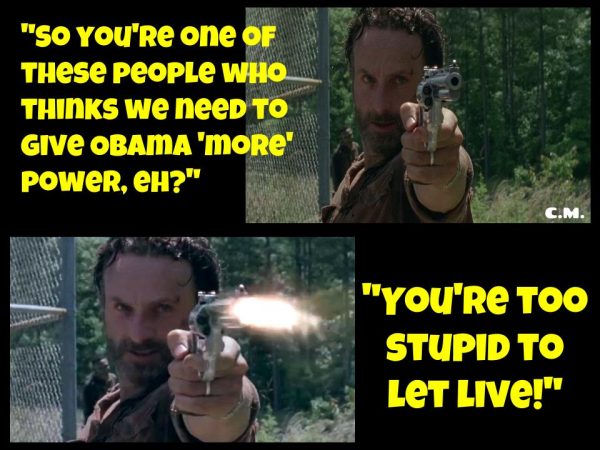