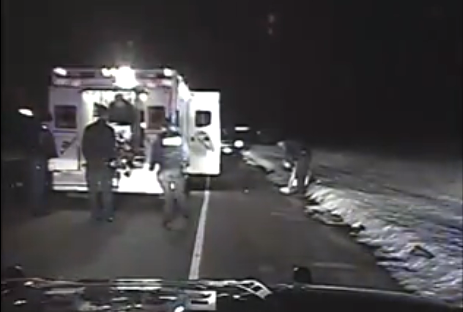 “He’s having an asthma attack! He’s going to die if we don’t get him to the hospital!”

Chippewa Falls, WI — Dashcam video has been released that shows the disturbing last moments of a man’s life as he’s detained by a Chippewa Falls police officer on the way to the hospital.

29-year-old Casey Kressin died after suffering a severe asthma attack when the vehicle that was rushing him to the hospital was pulled over by a Chippewa Falls police officer.

After they were stopped, Kressin’s girlfriend immediately starts to beg the officer to take him to the hospital. The officer instead calls for an ambulance.

The couple was just 3 miles from the hospital when they were stopped. It took over 6 minutes for the ambulance to arrive.

During the stop, the officer callously listens to the begging couple’s pleas for help as Kressin slips further away. “He’s going to die! He can’t breathe!” screams Kressin’s girlfriend. We can hear Kressin begging for help as he falls to the ground, starving for air, “I can’t breathe…..I can’t breathe.”

The officer just stares at the couple, telling them to wait for the ambulance. By the time the ambulance arrives, it takes another 2 and 1/2 minutes before Kressin begins his journey to the hospital; sadly too much time had passed. Police say Kressin became unresponsive at that time and was pronounced dead at Saint Joseph’s Hospital.

Warning the video below is graphic: Viewer Discretion Advised

Chippewa Falls Chief Wendy Stelter says she stands behind the officers who responded, saying that Kressin’s girlfriend should not have been allowed to drive the rest of the way because she was hysterical.

However, she was only hysterical because her boyfriend was dying and being kept from life saving treatment that could have saved his life.

Sadly this type of response by police is not uncommon. In October we brought you the story of the woman in labor who was forced to the ground at gunpoint after police deployed spike strips on the couple who was speeding to the hospital to have their baby.

In July, the Free Thought Project reported on the story of the parents who were detained by police as they were rushing their 2-year-old son to the hospital after he was stung by a scorpion.

The list goes on – from beating a man who was having a diabetic attack to breaking a man’s arm as he has a seizure, police these days seem more interested in collecting the revenue from traffic violations instead of helping people in need.

However, we’d be irresponsible if we didn’t provide an example of the proper way police should react to situations like this one. This week, we reported on the story of Helen Smith, who actually crashed into a cop car on her way to visit her gravely ill son in the hospital. Instead of detaining or beating her, the Utah State troopers drove her hundreds of miles to see her sick son.

If this Chippewa Falls officer would have applied the same level of discretion as the Utah troopers, he’d be the hero of this story, instead of the villain.