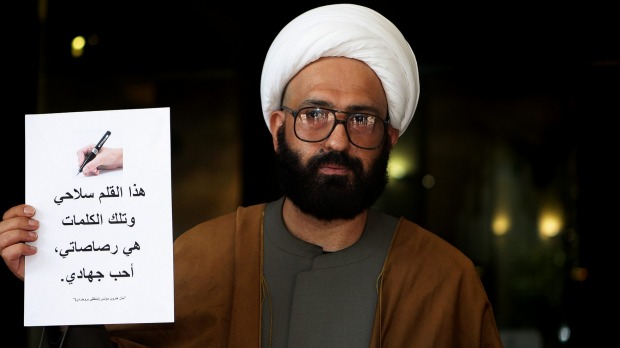 Despite demanding to speak with the Prime Minister, asking for an ISIS flag, and telling hostages that the media was covering up ISIS responsibility for the attack, the narrative in the Sydney siege quickly shifted to portray culprit Haron Monis as an “isolated figure” who had no real political motivations.

Whether or not Monis was an ISIS member or merely inspired by ISIS, to downplay that his actions were politically motivated is patently naive. While it’s true that Monis was out on bail after being charged as an accessory to the murder of his ex-wife, both his history and his actions during the siege clearly indicate that he was driven by extremist Islamist ideology.

Monis made numerous demands during the siege that were deliberately not reported by the media. When those demands leaked out onto Facebook and YouTube, the posts and videos were quickly deleted.

Hostages were asked by Monis to produce short videos in which they related Monis’ assertion that the incident was an ISIS attack and that the media was covering up the fact that the attack was inspired by ISIS. Monis also repeatedly demanded access to a radio station to air his views.

A Facebook post made by one of the victims also stated, “The man wants the world to know that Australia is under attack by the Islamic State”. Monis also demanded that an ISIS flag be delivered to the cafe. A generic Islamist flag was subsequently held up by hostages in the window of the Lindt store.

Monis originally came to Australia in 1996 as a political refugee and self-proclaimed Shia cleric, claiming that his life was under threat from the “Iranian regime” and was subsequently interviewed by Australia’s ABC network in 2001 in what some saw as part of an effort to demonize Tehran. Monis also said he was in contact with the United Nations regarding Iran’s “terrorist operations in the war”.

In 2008, Australia’s senior Shia leader, Kamal Mousselmani, urged federal police to investigate Monis while distancing himself from the cleric, asserting that no one knew who he was.

In September last year, Monis was sentenced with 300 hours community service for sending hate mail to the families of Australian soldiers killed in Afghanistan.

Earlier this month, Monis announced his conversion to Sunni Islam, posting on his website, “I used to be a Rafidi, but not any more. Now I am a Muslim, Alhamdu Lillah”.

Indeed, the mainstream media now seems to be very keen on emphasizing the narrative that Monis was a “lone actor,” an “isolated figure” and had “no known links to jihadist groups”. His overtly political statements and demands made during the siege have either been glossed over or ignored entirely.

Imagine for a second if a Tea Party supporter in the United States who hated Muslims took dozens of hostages and asked for a Ku Klux Klan flag while ordering the hostages to tell the media that he was acting on behalf of the KKK – would the media then downplay the political motivation behind the attack?

The Grand Mufti of Australia, the highest Muslim authority in the country, also sought to downplay any political or Islamist connotation, referring to the incident as a “criminal” attack.

Other factors also suggest that contrived concerns over cultural sensitivity were advanced to cloud the actual nature of the attack. A campaign called “I’ll ride with you,” which encouraged Australians to accompany Muslims traveling to work, went viral, despite no reports whatsoever of any violence being directed towards Muslims as a result of the incident.

The Sydney Morning Herald even suggested that Australians should have “empathy” for the terrorist, asking, “How should we feel for the perpetrator so far witnessed and his family?”

It’s odd that a country usually keen to create hysteria about Islamic terrorism in order to justify military campaigns would downplay the clear extremist Islam motivation behind the Sydney siege, but this seems to be part of a growing trend. The US Department of Homeland Security has also repeatedly denied information which suggests that ISIS members are active on the southern border.

Are authorities in the United States and Australia embarrassed at the fact that their role in destabilizing Syria helped foster the growth of ISIS and increased support for its activities worldwide, or are they just too incompetent to deal with the menace posed by the group and its ideology and have instead chosen to downplay the scale of the threat?