“It allows Republicans to show they are committed to ending Obama’s amnesty once and for all in the next Congress. If we agree it is indeed unconstitutional, we have no business funding it when the GOP controls Congress.”
– Senator Ted Cruz (TX.) before the vote on the ‘CRomnibus’ spending bill

Ted Cruz (along with Mike Lee) tried…he really did…but the Senate rejected his Constitutional proxy ‘Point of Order’ on Obama’s immigration executive action when he directly targeted the funding for the Department of Homeland Security.

Rightfully using the spending bill as leverage to try and stop the implementation of Obama’s executive ordered immigration reform, Cruz tried to defy RINO party leaders and their hanger-ons who cut deals with Obama and Reid to try and assure smooth passage of the $1.1 trillion spending bill. So in an attempt to force a Senate vote on said action as a condition for approving this disastrous bill, Cruz presented the argument that the bill violated the Constitution (and it surely does) because it would fund Obama’s plan as it rewrites current on-the-books immigration laws without any say whatsoever from Congress. And Cruz made sure he presented this to the Senate chamber in such a way that it was in keeping with long-standing Senate practices.

And yet the Senate rejected Cruz’s arguments for NO other reason than the Senate is still controlled by the Democrats and a large number of turncoat RINOS until…and it can’t come soon enough…January 6th when the 114th Congress is sworn in at noon.

Had the Senate sided with Cruz, this “mess of a bill” as he called it, would have been sent back to the House to have an amendment added to it that would have stopped the funding for Obama’s unilateral immigration reform. But by a vote 22-74 against Cruz…and with less than half of the Senate’s 45 Republicans voting with him*…this still Harry Reid led Senate proved once again to be deaf to the wishes of ‘We the People’…wishes that we shouted loud and clear back on November 4th.

And for those Republicans that voted against him…those like Sen. Bob Corker from Tennessee who had the audacity to call what Cruz did “irresponsible”…RINO extraordinaire Sen. Lindsey Graham from South Carolina who blamed Cruz’s actions for causing the garnering of less votes than it would have gotten without him butting in… and Senator Orrin Hatch from Utah who said Cruz’s antics irritated a lot of people… it will be remembered by true Conservatives next time they are up for re-election. And just know that payback will once again…as it was just some six or so weeks ago…be a b*tch.

And with that, the 1,603-page $1.1 trillion spending bill…reminiscent in length of the nightmare ObamaCare bill isn’t it…and the last major piece of legislation for this year…was passed by the Senate late Saturday night thus avoiding another possible government shutdown. But I say they should have shut the whole damn Obama government down, especially since essential services by law would continue to be funded. And as an added bonus by shutting the government down Obama could go play golf and thus do NO more harm to this country while he was doing so. 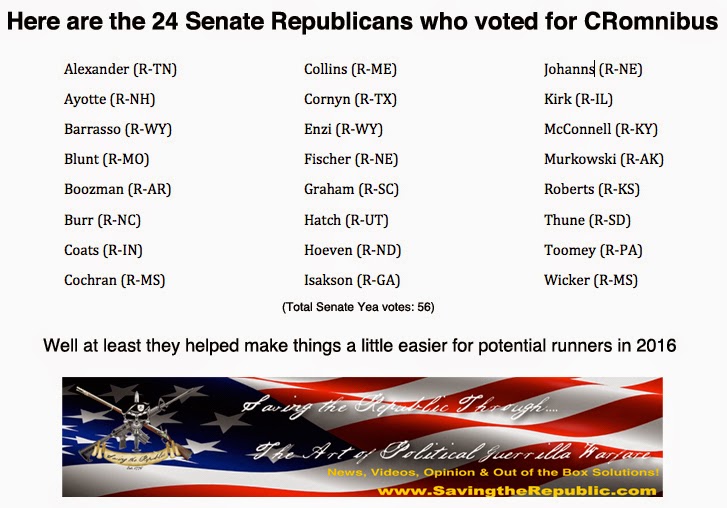 In a vote of 56 to 40** the so-called ‘CRomnibus’ bill (the combined continuing resolution and omnibus funding bill) will now provide funding for NOT only the dreaded ObamaCare, but for most government departments and agencies through fiscal year September 2015, that is except for the Department of Homeland Security which will only be funded through the end of February. And the Republicans say they intend to use the time between now and then to try and find ways to defund and halt Obama’s easing of deportation rules…ain’t going to hold my breath for that one…but with the new Republican controlled Congress being seated come January there is a possibility…albeit a remote one…that they can pull it off…that is if the party unites and stops all the in-fighting.

But this very in-fighting between the RINOS versus the Conservatives and TEA Party Republicans…in-fighting NOT of Cruz’s doing in my opinion…has now afforded ‘Prince’ Harry Reid the opportunity to move ahead next week…before this lame-duck Congress goes on Christmas break…with the 24 Obama nominees who most likely would NOT have been approved come the new Congress…nominees like 13 district court judges, 11 nominees to administration posts including customs enforcement officials and Carolyn Colvin to head the Social Security Administration along with the ubber liberal Vivek Murphy for Surgeon General.

Just a bit more of anything but happiness thanks to the RINOS who would NOT support Cruz.

But what was even more surprising about this final vote is that six Democrats actually sided with the Republicans against passage but NOT because they saw Obama’s actions as wrong but because of two provisions in specific that they did NOT like…one a provision that weakens the Dodd-Frank Act’s restrictions on banks that allows the banks to back their bets with taxpayer-backed insurance, and the other a provision that allows for an increase in the amounts that wealthy donors can give to major political parties. In fact, some Democrats claimed that these two provisions would have allowed already wealthy Wall Street employees to earn even more money, which they believe Republicans in turn would use to ‘reward,’ if you will, those who backed the spending deal.

Accusing the Republicans of kick-backs now aren’t they.

But NO matter who voted which way, the bottom line is that ‘We the People’ are screwed and stuck with a monstrosity of a spending bill. And while the bill as passed does block funding of the ‘risk corridors’ (insurer’s cost projections that in reality could cause individual plans to end up costing more than the insurers projections) that under ObamaCare could lead to a government bailout of the insurance companies at a huge cost to the American taxpayer, and does cut a bit more funding to the EPA to a tune of $60 million as well as prohibiting the IRA from targeting conservative organizations because of the way they chose to exercise their First Amendment rights, this ‘CRomnibus’ bill very unwisely caps spending for all-important national defense at $521 billion…very dangerous in this ever-expanding violent day and age of the islamic terrorist.

So as this sitting Congress soon retires for the holidays and as a new Congress gets ready to be seated, at least we start 2015 knowing we NO longer will have to deal with ‘Prince’ Harry Reid blocking every bill that originates with Republicans. But sadly, we also know that at least for now, work visas are still on the horizon for at least five million Obama-made legal ILLEGALS and all because the RINOS amongst us did NOT get that Ted Cruz was right…once again.
_____________________________________________________