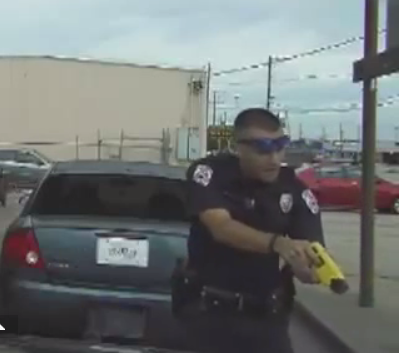 In another example of indiscriminate use of tasers for minor infractions, a Victoria, Texas officer is under scrutiny for beating and tasering a 76-year-old resident twice over a perceived license tag discrepancy that never actually was.

Pete Vasquez was pulled over on Thursday by a young officer because of his license plate – legal dealer tags that are exempt from inspection.

The officer attempts to snatch Vasquez’s papers away when Vasquez pulled back his arm. That’s when the officer forces him on the hood, then down to the pavement out of view. After tasing, the officer shouts repeatedly “Put your hands behind your back! NOW!”

According to the Victoria Advocate, a nearby friend/coworker seen in the video shouts to the officer that we was a “g——– Nazi Stormtrooper.” The friend followed the patrol car to the hospital and awaited his release – no citation.

Police Chief Jeffrey “J.J.” Craig – who confirmed that the dealer plate was exempt – has apologized and expressed sentiments about trust and transparency. However, the officer in question enjoys desk duty pending an internal investigation. Comments on Reddit imply that Craig is a good chief who does not allow brutalizing behavior on his force, and that it would be surprising if he is not fired.

While community beliefs about the virtue of the police chief are endearing, one must ponder what events precipitated the officer’s inherent belief that he could brutalize an old man for what would only be a Class C misdemeanor, warranting a citation by law – not two taser stuns and a beat down out of camera view.

Craig holds that the officer could receive anything from a reprimand letter to termination if it is found that he violated a use of force policy. As reported before, some cops are imploring other officers – and arguing – that there is no such thing as excessive force.