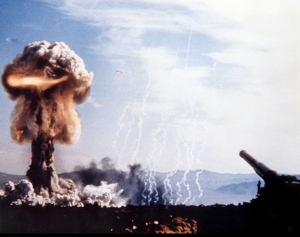 More than two decades after the Berlin Wall fell, it appears that the United States and Russia are engaging in the same sort of proxy wars that were so common during the Cold War. Everywhere that Western and Russian spheres of influence meet there is the potential for conflict, and the two aging superpowers have shown their willingness to fight through their neighbors. However, this game of chess has taken on a whole new dimension that is radically different than what we saw during the Cold War.

The whole point of a proxy war is to resist your enemy without actually engaging with him. Once the nuclear arms race began, it became clear that the massive ground battles of World War Two were a thing of the past. If a war starts between Russia and the US, it’s only a matter of time before the conflict escalates into nuclear annihilation. Like the computer says in Wargames, “A strange game. The only winning move is not to play.” That makes America’s current actions in Ukraine all the more puzzling.

Sniper and assault rifles. Hand grenade launchers. Mortars and shells. Stingers. Anti-tank missiles. What’s known may be the tip of the iceberg.

UFSA legislation “authoriz(ing) (Obama) to provide defense articles, defense services, and training to the Government of Ukraine for the purpose of countering offensive weapons and reestablishing the sovereignty and territorial integrity of Ukraine…”

Gone are the days of quietly supplying the Mujahideen with stinger missiles in Afghanistan. I’m sure Russia knew we were helping their enemies in the 80′s, but our government didn’t really make this fact public, and that’s a crucial strategy with proxy wars.

Remember, the goal is to not fight your enemy directly. But on the global stage, making a public statement to harm your enemy, forces your enemy to take action in a public way. They can’t be seen as weak, so they must swiftly return fire for all the world to see. As you can imagine this has the potential escalate quickly, especially between two nuclear armed superpowers. What starts as a proxy war can quickly turn into a real war with millions of casualties. In the words of Russia’s Deputy Foreign Minister Sergei Ryabkov “Russia will not be able to leave this without a response.”

But the United States hasn’t just made a public attempt to supply Russia’s enemies. They’ve also directly threatened them in subtle ways.

“We don’t have ground-launched cruise missiles in Europe now obviously because they’re prohibited by the treaty,” said Brian McKeon, principal deputy undersecretary for policy at the Department of Defense.

“But that would obviously be one option to explore,” he added.

It appears that the United States is playing hardball with Russia, when they’re really in no position to do so. Russia’s nuclear arsenal has recently surpassed America’s, and their ability to deploy these weapons has America’s top brass rather worried. Russia is currently deploying bombers, submarines, and ICBM’s that could be just as advanced and stealthy as our own, if not more so.

It should come as no surprise that Russia’s military may be able to surpass our own in the near future, because they’ve kept their priorities straight. While the United States has spent the past 15 years training and equipping its military to suppress low budget insurgencies all over the world, Russia has never stopped preparing its military to fight our own on a conventional battlefield. While we were busy fighting the War on Terror, they caught up to us.

And now the United States thinks it can bully Russia and arm their neighbors. It’s like they think it’s still 1991, when Russia was in free fall mode. Russia isn’t some second rate backwater country we can push around. They’re an advanced nuclear armed superpower that delivers nearly half of Europe’s fuel supply, while all we can deliver is a broken military and an economy that is rapidly circling the drain.

They have all the cards, and yet our government continues to poke the Russian Bear with a stick. It should be perfectly clear by now that our government is hell bent on starting World War Three. There will be no more pussyfooting around like the Cold War. Except this time, I don’t think anyone believes that the US will come out on top. Not only are we desperately trying to start a war, we’re practically begging to lose.